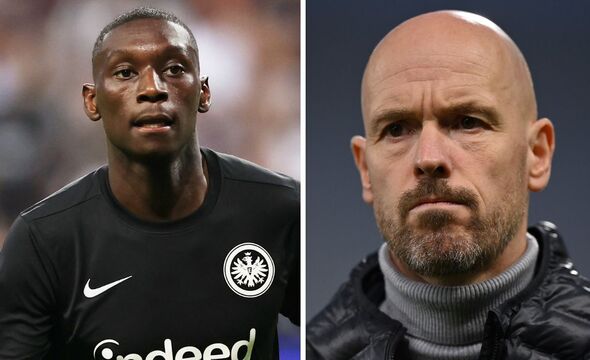 Manchester United may have to forget about a move for Randal Kolo Muani in the near future with three main obstacles blocking a potential transfer to Old Trafford. It was little over a year ago when Frankfurt won the race to sign Kolo Muani as a free agent heading into the summer transfer window.

It’s proven to be one of the best pieces of business in 2022 with the attacker impressing in his debut season in the Bundesliga. He’s already found the net eight times as well as providing 11 assists with two important goals in the Champions League to help them quality for the knockout stages.

Kolo Muani’s displays earlier in the season saw him named as a surprise call-up to France’s World Cup squad and he scored in their semi-final win over Morocco. And he’s now being linked with a mega-money move away from Frankfurt just a few months after joining them.

A number of elite European clubs are keeping an eye on him in the January transfer window with United touted as a possible destination. But Sky Germany indicate United face a tall order in trying to win the race for the 24-year-old’s signature.

It is claimed that Frankfurt have no interest in selling their prized asset this month. A move in the summer is possible, but Frankfurt are reportedly holding out for a bid no less than £80million with no release clause supposedly in his contract.

Furthermore, the attacker’s preference would be to stay in the Bundesliga and sign for one of Bayern Munich or Borussia Dortmund. Frankfurt chief Markus Krosche confirmed the club’s stance on Kolo Muani leaving this month earlier this week.

“We are not going to sell Kolo Muani,” he said. The German side are currently on course to finish inside the top four for the first time in 11 years.

They sit fourth and just three points adrift of Freiburg in second, but there are a number of teams all clamouring for the Champions League spots. Kolo Muani has been crucial to Frankfurt’s success so far with no player in the Bundesliga providing more assists than his nine.

The Bundesliga season doesn’t get back up and running for another few weeks, but teams are now back in training following the winter break.