Manchester United legend Paul Scholes has called on his former side not to miss out on Jadon Sancho like they did with Erling Haaland. Sancho is United’s top transfer target this summer but the Red Devils, as of yet, are not willing to pay the £108million price tag Borussia Dortmund have put on his head. Dortmund sporting director Michael Zorc stated on Monday that they are now planning for the England international to remain at their club next season.

However, Scholes agrees with former United team-mate Owen Hargreaves that Dortmund’s tactic is just to get more money for Sancho.

Scholes believes if Ole Gunnar Solskjaer is desperate to sign Sancho then a deal will end up happening.

However, he has warned the club about how they missed out on another top target in Haaland earlier this year.

United wanted to sign teenage-striker sensation Haaland from Red Bull Salzburg but the Norwegian instead joined Dortmund for around £18m. 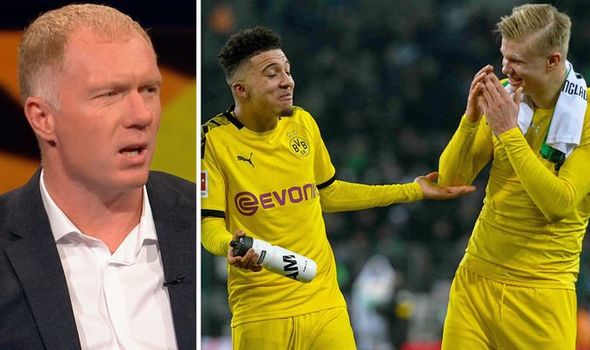 “They’re just after a little bit more money out of it aren’t they.

“He looks a brilliant player so I think he will improve any team in world football. His assists, his goals.

“The only thing I would say about United, I think they were desperate for Haaland as well, they didn’t quite go the extra mile to pay the money they wanted for him there.

Speaking to the media on Monday, Zorc insisted the club’s decision on Sancho was “final”.

He also revealed Sancho has a contract until 2023 – a year longer than originally thought.

“We plan on having Jadon Sancho in our team this season, the decision is final,” Zorc told reporters.