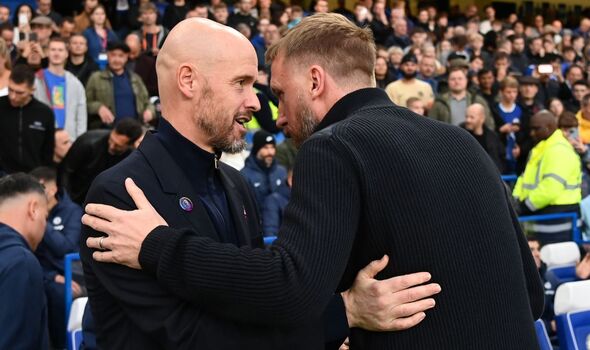 Manchester United are seemingly making progress on a loan deal for Wout Weghorst but allowing Marcus Thuram to join Chelsea this month would simply represent a missed opportunity for Erik ten Hag and the Old Trafford recruitment team. The Blues are now understood to have open talks over a cut-price deal with the 25-year-old forward now in the final six months of his Borussia Monchengladbach contract.

Thuram was one of the shining lights at the World Cup as he made several important contributions from the bench for Les Bleus.

It is now a mystery as to why a number of big clubs from across Europe are prepared to overlook the proposition of landing Thuram on the cheap this winter.

Gladbach are reportedly willing to sell for just £8.5million and now Chelsea are expected to make a move to land the France international and bring him straight into Graham Potter’s depleted squad.

United should have already been all over this deal as Thuram ticks multiple boxes for Ten Hag and his current January requirements.

Having freed Cristiano Ronaldo from the final six months of his lucrative contract, United are now in need of some extra quality in the final third.

Yet that makes it even more baffling that they are not prepared to move for Thuram, whose price has been slashed by Gladbach in a bid to avoid losing him on a free transfer.

He is comfortable on either flank and as shown at the World Cup, he can also operate in a central striker role – one that he carries out very efficiently.

It would be a real eyebrow-raiser if United were willing to let him join Chelsea without any transfer competition.

Thuram is the kind of profile that ticks multiple boxes for Ten Hag and even with Weghorst potentially arriving at the club, the Frenchman brings something different to the table.

United seem to be fixated on the loan market and the idea of signing a stop-gap option to see them through until the end of the season.

Yet there is going to come a point where United are going to need a greater injection of quality – particularly if there are injuries or if Marcus Rashford stops firing on all cylinders.

Ultimately, allowing Thuram to join Chelsea would feel like a major opportunity squandered while also allowing a rival to strengthen.

It is something United must avoid at all costs, particularly if they are working with restricted finances this month.

Thuram is free to speak with foreign clubs and United could launch an approach by opening talks with his entourage, who are keen to secure their client the best move possible.

For the first time in a while, United now look to be a greater sell than Chelsea as the Blues continue to languish down in mid-table following a barren run under Graham Potter.

Ten Hag’s side are now making strides and are eating up the ground on their rivals at the top of the table. Adding Thuram to their ranks would only bolster their chances of finishing inside the top four come the end of the campaign.

Tuchel confirms he took Mbappe off against Nantes as a precaution