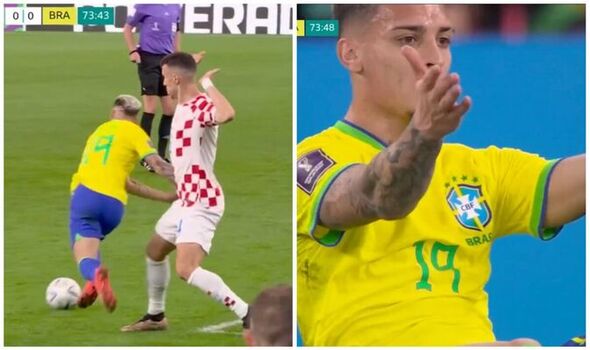 Manchester United winger Antony has been slammed for an atrocious dive during Brazil’s World Cup clash with Croatia. The 22-year-old audaciously appealed for a free-kick despite theatrically falling to the turf under no contact from Ivan Perisic.

Remarkably, Premier League referee Michael Oliver did not book Antony for simulation even though he waved play on and clearly did not think the attacker had been fouled. The game continued with Antony still protesting, but fans were quick to mock the shocking attempt to win a free-kick.

Supporters from several clubs ripped into the former Ajax man. Some felt it was the worst dive they had ever seen, while others labelled him a ‘clown’.

@NealGardner_ wrote: “Antony with the worst dive I’ve seen in a long time, gotta book that.”

@TheKopHQ tweeted: “Wow what a shocking dive that was by Antony.”

“What was the dive from Antony,” mocked @Saweezyy with four crying-laughing emojis.

Other fans joked that despite only spending three months with former Man Utd attacker Cristiano Ronaldo, Antony had already learned well from the football icon. Ronaldo earned a reputation early in his career for going down too easily to win penalties and free-kicks.

Another fan, @T_T_2219, had the same idea but also dragged current United midfielder Bruno Fernandes into the equation. “Antony already learned to dive from Ronaldo and Bruno,” they observed.

Meanwhile, other fans questioned why Oliver had not produced a yellow card. The English official clearly knew Antony had gone down theatrically and yet did not book the United star.

“So if Michael Oliver deems Antony to dive, which he was completely correct to. Why no card?” asked @PBathurst.

@KingKane_9 bluntly wrote: “Why isn’t Michael Oliver booking the Brazilian players for diving under literally no contact in the box? Antony thinks he’s an Olympic swimmer.”

“How did Antony not get booked for that? Michael Oliver is such a joke,” laughed @Barony_CFC.

Others preferred to put a positive spin on Oliver’s refereeing, pointing out that referees unfamiliar with Antony’s style of play might have fallen for his diving. “Well done Michael Oliver, such a blatant dive by Antony,” said @SamJermy.

EFL fixtures 2020/21 in full: Every key date and full schedule for EVERY club