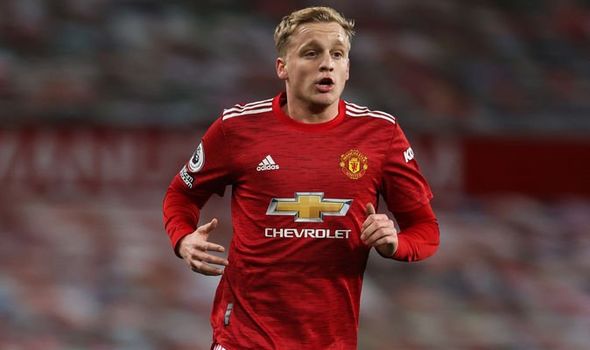 Donny van de Beek is happy at Manchester United and accepting of the fact he will be regularly rotated with Bruno Fernandes and Paul Pogba under Ole Gunnar Solskjaer, according to reports.

United paid £40million to sign Van de Beek from Ajax in the summer transfer window but he has only been used sparingly by his manager since.

The 23-year-old, despite scoring on his United debut, has been limited to five starts across the Premier League and Champions League this term, his appearances amounting to just 525 mintues played, compared to Fernandes’ 1,741 and Pogba’s 1,037 across the same two competitions.

Dutchman Van de Beek has displayed his quality in matches but has found himself below Pogba and the talismanic Fernandes the pecking order.

The Athletic say despite some frustrations among the United fanbase that the classy ball-playing midfielder is not getting more game-time, Van de Beek remains happy. 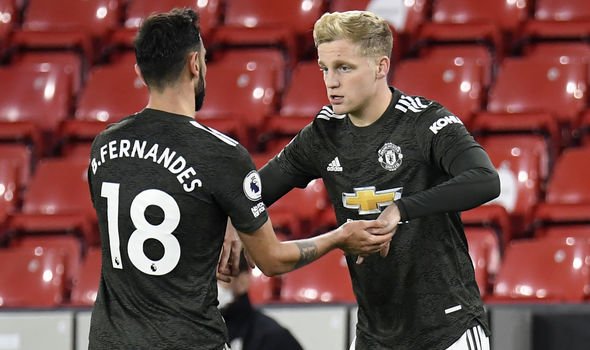 It is claimed that before he moved to Manchester, the player was well aware that there would be a period of adaptation required before he blossomed into a key player.

Van de Beek’s last league start came against West Ham when he was substituted off at half-time for Fernandes and he is said to accept that he did not play well enough at the London Stadium.

United trailed 1-0 at half-time but went on to win the game with Fernandes grabbing an assist for Pogba’s equaliser before goals from Mason Greenwood and another half-time introduction, Marcus Rashford.

Van de Beek accepts that he is fighting with Fernandes and Pogba for minutes in the middle although he has only featured sporadically in recent weeks.

He was an unused substitute in the Premier League victory over Aston Villa last week but will hope to face Manchester City in the Carabao Cup tonight (7.45pm kick-off). 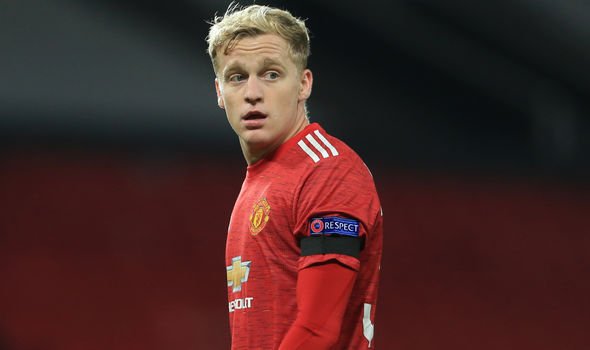 United face their neighbours in the semi-finals looking to book a showdown with Jose Mourinho’s Tottenham at Wembley in the final at the end of April.

The Ajax academy graduate has started in all three previous rounds of the cup competition including in an unfamiliar left wing role for the win over Everton pre-Christmas.

And if he does not start this evening, Van de Beek is surely set for a lengthy outing against Championship promotion hopefuls Watford in the third round of the FA Cup on Saturday night.

Speaking ahead of those matches, United boss Solskjaer said of the Netherlands international: “Donny has played well when he’s got the chance. I think we are too quick sometimes to jump on that if he isn’t playing, that it is a failure.

“Victor [Lindelof] and Fred are good examples in my team that it takes a little bit of time and now they are massively important players in our squad and in our team and it will be the same with Donny.

“He has come in and is in a midfield pool of players with quality, challenging with Bruno [Fernandes], Juan [Mata], Jesse [Lingard].

“There are many of them and Donny has played well when he’s got the chance and that is a big thing, that you are ready.

“He is always ready, he works hard in training, [is] positive and he will make differences in many games for us this season, but he’ll grow more and more even for next year.”