Manchester United star Marcus Rashford has praised Mason Greenwood after the club’s 5-2 battering of Bournemouth on Saturday. The Red Devils went a goal down early on at Old Trafford. But a Greenwood brace and further strikes from Rashford, Anthony Martial and Bruno Fernandes gave Ole Gunnar Solskjaer’s side all three points.

Manchester United went into the match against Bournemouth aiming to continue their quest for a Premier League top four finish.

And they did just that, with Ole Gunnar Solskjaer’s side recovering from a shaky start to pick up three crucial points.

Junior Stanislas put the away side in front early on but United responded through Greenwood and Rashford, with the latter scoring from the penalty spot.

Martial then added a third for United before Bournemouth pulled one back through Joshua King, who was a Red Devils transfer target back in January.

However, the hosts made the points safe with further strikes from Greenwood and Bruno Fernandes. 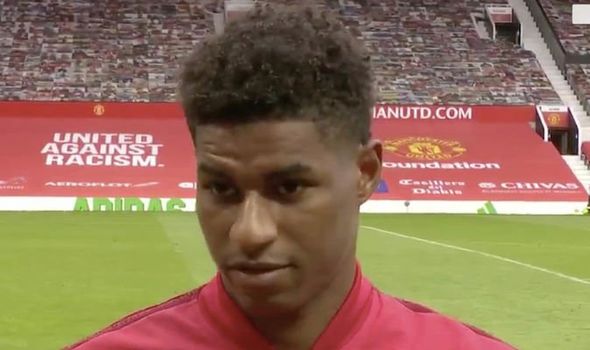 And, speaking after the game, Rashford said: “The lads enjoyed it today. Definitely exciting times.

“It doesn’t matter who scores as long as we are scoring and picking up points in the table.

“It is always positive for teams if their forwards are scoring. It is important now to push on until the end of the season.”

On Greenwood, he added: “Left foot, right foot he can finish. Both sides are comfortable for him.

“I don’t want to put too much emphasis on him, just let him play his football and that he is what he does. It is a big bonus to have him in the squad.”

United boss Solskjaer was delighted with the win.

“Very, very happy with today, with the energy in the team and the goals we scored,” he said.

“I think that was a game for the fans. That is definitely one the Stretford end would have enjoyed.

“They are on the same team and working towards one common goal.

“That is one of the positive things about the forwards they are good friends and keep challenging each other.”

Solskjaer then added of Greenwood: “He is a fantastic goalscorer.

“The moment he chose the goal, they were very important moments for us.

“He is a very, very talented boy and we will nurture him and manage him as best we can.”

Victor Lindelof hobbled off at half time.

And, on that, the United manager said: “He struggled with his back but hopefully won’t be too bad.”

Analysis: Callum Robinson one of the few Irish positives on drab night at the Aviva Stadium