Manchester United must sign Jadon Sancho as soon as possible or risk missing out on signing the England star forever, according to former Chelsea defender Jason Cundy. Borussia Dortmund winger Sancho is United’s top target for the current transfer window. However, the Red Devils are yet to match Dortmund’s asking price of over £100million.

Sancho has reportedly agreed a five-year deal with United if he were to join the Old Trafford club.

But Cundy says United must get the deal done now because it may be the only chance they have of signing the 20-year-old throughout his career.

“Clearly they want to get this done,” Cundy said on talkSPORT. 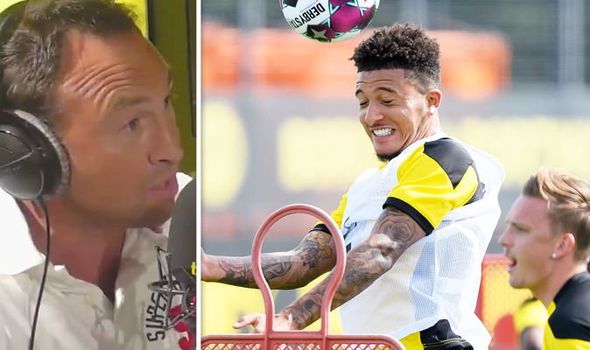 “I would be investing money in that area if I was Manchester United.

“Jadon Sancho, how often is he going to come up for sale? If he goes to Real Madrid, probably never again.

“So if he turns out to be the real deal, this is now probably the only time that Man United might be able to sign him.”

Cundy says United have haggled over transfer fees in recent times but have eventually paid what the selling club wants.

“Manchester United went through something very similar about 12 months ago [with] Harry Maguire, just under £80m,” Cundy continued.

“They were offering £60m, £65m, Leicester were like: ‘It’s quite simple, this is not a difficult scenario to understand and work out. If you want him, pay’.

“When you’re the biggest club in the world, unfortunately they can’t plead poverty.”

“He’s English, he’s young, I think they’re getting a bargain if they are getting him for that price.”