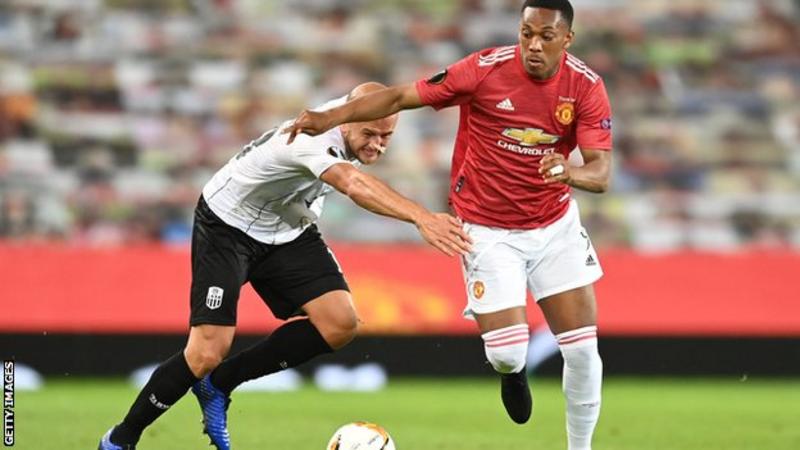 Martial, 24, scored his 23rd goal of the season against LASK in Wednesday’s Europa League last-16 victory.

He has never scored more than 17 in a single campaign and this term’s tally is more than the last two seasons combined.

“Physically, he is at the best level of his career,” said Solskjaer.

After replacing Jose Mourinho as manager in December 2018, the Norwegian made it a priority to work on Martial’s finishing.

The rewards have been clear, with Martial now one ahead of Marcus Rashford in the United scoring charts heading into the quarter-final with FC Copenhagen in Cologne.

“Anthony has made huge strides this season in many aspects of his game,” said Solskjaer.

“We know he can do worldies but I like him scoring the simple goals, when he is in between the posts. He’s done that a few times.

“He’s in the gym a lot working on his fitness and strength. I’m just looking forward to seeing him improve. There’s more to come from him.”

The ties in the closing stages of the Europa League will be single-leg games held behind closed doors at venues across Germany with the final on 21 August.

Solskjaer is aiming to win his first trophy as United boss, but having finished third in the Premier League, they have already qualified for next season’s Champions League.

“We went into this season knowing that the Europa League is a great chance for us to get a trophy, to get far in a tournament,” Solskjaer said.

“But also to groom a few of the youngsters and it was perfect for us.

“We are in a strange period at the moment, unprecedented, we’ve got to make the most of it and if we are able to go through to the semi-final and final it would mean a lot to the club, players, supporters and staff. We just have to make the best out of a difficult situation.”

Solskjaer will be meeting a familiar foe in FC Copenhagen boss Stale Solbakken, having been team-mates at the 1998 World Cup.

Former Wolves boss Solbakken also allowed him to watch Copenhagen work in his previous stint at the club when Solskjaer needed some exposure for part of his Uefa Pro Licence course.

“I saw them lose to Chelsea that time,” said Solskjaer. “Hopefully this time they will lose to us.”

Solskjaer’s most difficult selection decision may surround his goalkeeper.

Sergio Romero has played eight times in the competition so far, including both games against LASK. David de Gea has only featured once but was selected ahead of the Argentine for the FA Cup semi-final against Chelsea, when the Spain international made two mistakes in the Blues’ victory.

And while it will have no bearing on the remainder of this season it seems Dean Henderson, who spent last season on loan at Sheffield United, will also be added to the mix when it comes to deciding on United’s goalkeeping ranks next term.

“I must be the most privileged manager in the world with the goalkeeping department with Sergio, David and Dean Henderson coming back,” he said.

“We have seen this season how important Sergio has been for us and, for me, David is always performing.

“Competition for places is important but it will be difficult to keep three of them at the club, so we will see what the decision will be there.”

• Manchester United and FC Copenhagen have only met twice, in the 2006-07 Champions League group stages – the Red Devils won 3-0 at Old Trafford before losing 1-0 in Copenhagen.

• In 10 previous attempts, FC Copenhagen’s only victory against English sides in European competition was against Manchester United in November 2006 (D4 L5). They have failed to score in their past four games against English opponents.

• Manchester United are looking to reach only their second European semi-final since Sir Alex Ferguson’s retirement in 2013, doing so in 2016-17 when they went on to win the Europa League under Jose Mourinho.

• Manchester United’s Juan Mata has been directly involved in seven goals in his nine Europa League appearances this season (two goals, five assists); in 26 matches in other competitions, Mata has been involved in just three goals for the Red Devils (one goal, two assists).