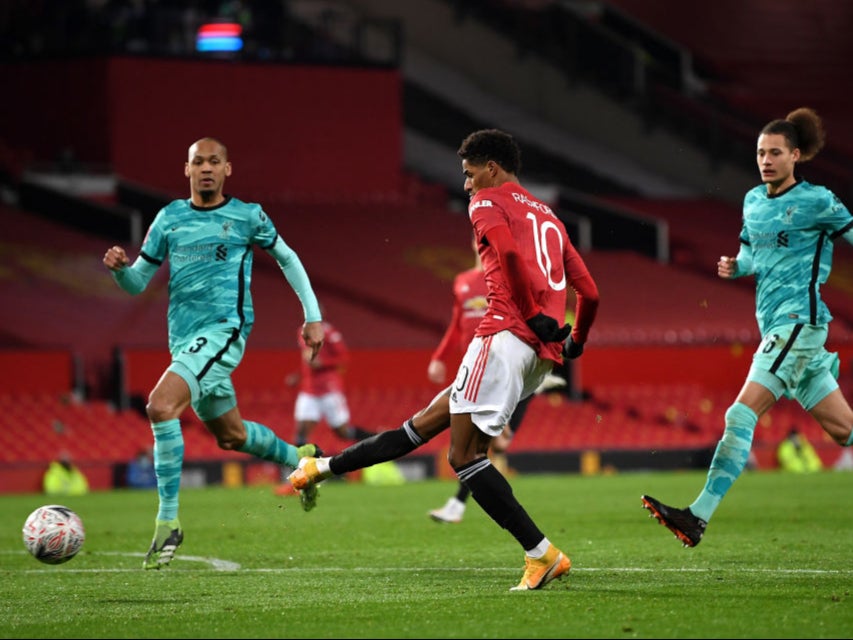 Marcus Rashford was superb for United

Alisson Becker – 5. One or two issues with his passing out and beaten three times into the far corners.

Trent Alexander-Arnold – 6. Better than some recent showings but still looks well below his usual level.

Fabinho – 6. Excellent in some moments of recovery and clearances, but beaten for pace and committed fouls on plenty of other occasions.

Andy Robertson – 6. Some very good low crosses at one end but caught at the other for United’s first-half goal.

Thiago – 6. Got his team on the front foot for spells, but his most creative attempted work fell short.

Gini Wijnaldum – 6. Did plenty of good work but lost out in the battle with Pogba several times. Subbed after an hour.

James Milner – 6. Defensively a little suspect with the runners in behind him,

Curtis Jones – 7. Some neat moments on the ball, though did fade out of the game at times.

Mohamed Salah – 8. A tremendous pair of finishes to put his team ahead and then draw them level.

Roberto Firmino – 8. Suited him to have another forward closer to him in the middle – created both Salah’s goals and several other openings.