Marine have jokingly claimed Arsenal offered them the chance to sign Mesut Ozil on loan to help beat north London rivals Tottenham. Marine are hoping to pull off the greatest upset in FA Cup history when they welcome Tottenham to Rossett Park today (5.00pm). The Merseyside club ply their trade in the eighth tier of English football, with the 161-place gap between the two sides the biggest in the history of football’s oldest cup competition.

With lockdown in full force in the UK, Marine are not able to welcome fans to the match.

However, they have sold over 18,000 virtual tickets to help the club’s finances.

But they seemingly don’t need any help on the pitch after their Twitter account claimed on Sunday morning that they rejected the chance to sign Ozil from Arsenal. 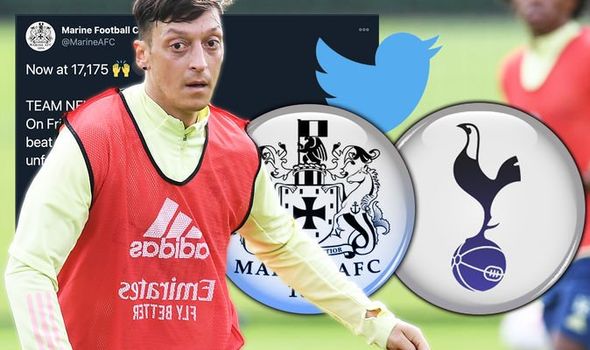 “I’m sorry our bench is already sorted unfortunately,” accompanied with a hand emoji and a crying with laughter emoji.

Speculation surrounding Ozil has hit the headlines this week, with the German looking set to leave Arsenal for Turkish club Fenerbahce.

He hasn’t played a single minute of competitive football since last March. 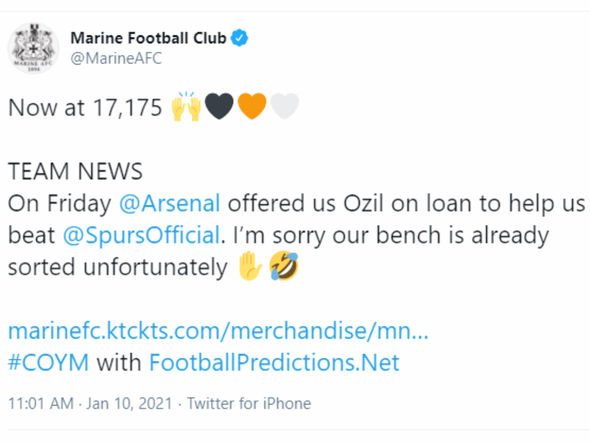 And he is happy to be playing at home rather than at Spurs’ new 62,000-seater stadium.

“Personally, why would I want to go to the Spurs stadium, run around on carpet and get played off the pitch?” Cummins told talkSPORT.

“It’s an absolute no-brainer for me to do it at our place. I know the chairman wouldn’t thank me for saying that, but from a football context, we want to do well in this game.

“For the first time in the club’s history, we’ve got covers over the pitch – which I’m not too happy about. I was hoping it was going to be a bit of a minefield! It’s been protected a bit too much.”

Tottenham boss Jose Mourinho has promised to play a strong team, which has not pleased Cummins.

“I was really hoping Jose Mourinho would show the Cup no respect,” he added.

“It’ll be brilliant for the club to see all these top players, whether they’re on the side or on the pitch, it’ll be a great experience. But it won’t help us if they bring all the big guns!”

Carlos Soler wages: How much does the Arsenal transfer target earn?