Livingston captain Marvin Bartley has admitted that he has lost faith in taking a knee before kick-off and says authorities must do more to combat racism.

Players across Europe have been kneeling ahead of games since June 2020 in an effort to highlight racial inequality, but some in England and Scotland have recently decided to stop doing so.

Players and coaches from both Rangers and Celtic chose to stand ahead of Sunday’s Old Firm game to show solidarity with Glen Kamara, after the Rangers midfielder suffered alleged racial abuse from Ondrej Kudela in their Europa League defeat to Slavia Prague last week.

Kudela admits abusing Kamara but denies his language was racist. UEFA are investigating the incident.

Dundee United and Motherwell also chose to stand this weekend, while Crystal Palace forward Wilfried Zaha has opted to no longer kneel, saying he prefers to “stand tall”.

As well as being abused on the pitch, numerous players in Scotland and England have been racially target on social media in recent months – the latest being Alfredo Morelos, with Police Scotland investigating abuse allegedly aimed at the Rangers striker this weekend.

All of this has led Bartley to admit he has “lost faith”, telling Sky Sports News: “With what’s happened in the last week, and building up to that, a lot of clubs have had enough.

“Obviously taking a knee was the first part and it was striking at the start. We thought that things would follow it and they haven’t, so a lot of clubs have now decided to stand up.

“Now we need more – the powers that be to say, ‘this is the next step’. At the moment it’s a token gesture.

“I’ve been a great advocate of people taking the knee and I’ve spoken to many players about it when they’ve wanted to stop.

“But now I can’t do that. I can’t put my hand on heart and say, ‘I truly believe what we’re doing now is making a difference’. I don’t. I’ve lost faith.” 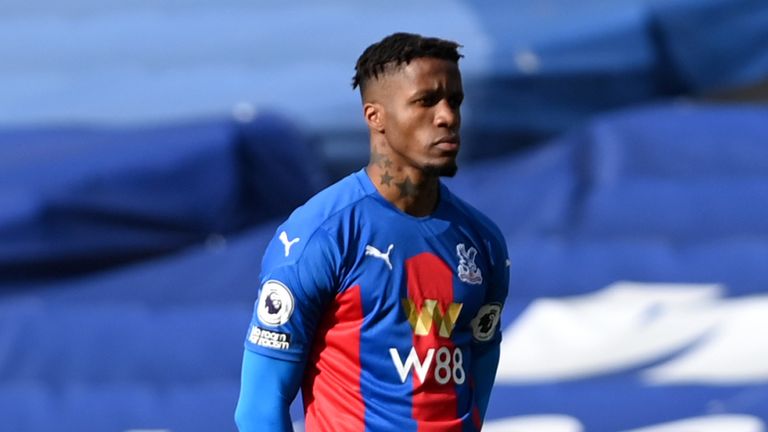 Despite his unhappiness with the lack of progress being made in the fight against racism, Bartley says he will continue to kneel before kick-off as he believes doing so ensures the message reaches a wider audience.

The 34-year-old also admits he is “disappointed” to see players no longer taking a knee, but added: “It’s not a worry because the reason they’re not doing it is that nothing else is happening after it.

“People are still being racially abused. It’s not like they’ve said, ‘right, it’s gone on for 10 or 11 months, things have got slightly better so we’re not doing it anymore’. They’ve had enough so they’re trying to do something different. I totally understand it.”

Bartley was also encouraged by the scenes at Celtic Park ahead of Sunday’s Old Firm game, saying: “It’s not just about black players – it’s players of all colours.

“The Scottish football family all pulled together over the weekend and it was magnificent to see. We’re all standing united.

“It was powerful to see, especially during the game between Rangers and Celtic. They’re all standing united in one of the biggest derbies in the world.”

As well as leading Livingston on the field, Bartley will also be working with the Scottish Football Association (SFA) after he was asked to join their Equality and Diversity Advisory Board.

He said: “I was delighted to be contacted by the SFA. I’ll be advising them on certain situations, being a current player and having dealt with a few things myself.

“It’s about players and the SFA coming together to make things better for the future generations. I’m extremely proud of the SFA for doing this.

“We’re a lot further ahead than a lot of FAs around Europe. The SFA do an awful lot, but they want to be the trendsetters and setting the standards for everybody else.”

Ian Maxwell, Scottish FA chief executive, added: “The incident involving Glen Kamara at Ibrox last week demonstrates that society and football still has a lot of work to do to eradicate racism.

“Scottish football’s response shows the commitment to change and EDAB exists to be an agency for change, bringing consensus from across the game on all matters of equality and diversity.

“After witnessing the scenes last Thursday, we contacted Rangers immediately through our equality team to offer our support and guidance through a range of services and we aim to continue that dialogue with any club directly affected by these issues.

“Scottish football has helped raise awareness of the issue of racism by taking the knee throughout the season but there is an acknowledgement that more needs to be done than a gesture of support, especially in the increasing scourge of racist abuse to players via social media.

“Through our EDAB discussions we will explore ways of implementing meaningful change with players at the centre of those discussions.”

Kick It Out reporting racism

Online Reporting Form | Kick It Out

Kick It Out is football’s equality and inclusion organisation – working throughout the football, educational and community sectors to challenge discrimination, encourage inclusive practices and campaign for positive change.

Arsenal and Atletico 'in contact over possible move for Thomas Lemar'