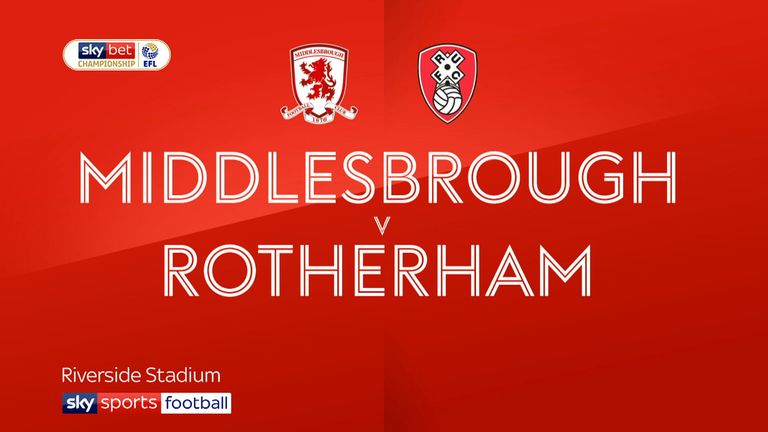 Middlesbrough remain at the top of the Sky Bet Championship table, but they have now gone four-and-a-half hours without a home goal after they were held to a goalless draw by Rotherham.

The Millers picked up their first away point of the season as they followed Swansea and Nottingham Forest in neutralising Middlesbrough at the Riverside, and Paul Warne’s side were rarely troubled as they held the league leaders.

Marek Rodak saved from Martin Braithwaite after the Middlesbrough striker broke clear in the first half, but Rotherham might have claimed all three points had Darren Randolph not made a superb first-half save of his own to prevent Ryan Williams from side-footing home.

Boro claimed top spot when they won at Sheffield Wednesday on Friday night, and having switched to a five-man defence at Hillsborough, Tony Pulis opted to stick with the same formation, even if it meant Stewart Downing having to play at wing-back.

Downing made some dangerous breaks down the left in the opening stages, but despite going into the game without an away win of any description since April 2016, it was Rotherham who fashioned the first opportunity midway through the first half.

Joe Vassell held off Adam Clayton to cross from the left-hand side, but while Williams must have thought he had scored when he side-footed towards goal from close range, Randolph somehow kept the ball out with a fantastic point-blank save.

The scare spurred Middlesbrough into life, and within a minute, Jonny Howson’s through ball was releasing Braithwaite into the area. The Denmark international had plenty of time to pick his spot, but his attempted chip was easily saved by Rodak.

Boro became more threatening as the first half wore on, and after Aden Flint won a header from a corner, Braithwaite sent a swivelled half-volley spiralling over the crossbar. Moments later, Flint was going close himself as he headed wide from a Downing free-kick.

Howson threatened at the start of the second half, only for his first-time volley from George Friend’s cross to be deflected wide, but while Rotherham were second best in terms of possession for much of the night, they continued to offer a sporadic threat on the break.

Ryan Manning hammered a rising drive narrowly over the crossbar in the 51st minute, although as the second half wore on, Rotherham’s defenders found themselves forced back towards the edge of their own penalty area.

Even so, Boro toiled as they attempted to force a breakthrough. Downing’s shot squirmed through Rodak’s grasp shortly before the hour mark, but Britt Assombalonga was unable to get a shot away as the ball rebounded towards him in the six-yard box.

Werner admits he is not 'satisfied' at Chelsea after 'difficult' start