The stadium speakers at La Ceramica bellowed devilishly for a moment with Highway to Hell as Raul Albiol doubled Villarreal’s lead and Unai Emery punched the air.

It felt like a fitting soundtrack to a chaotic evening; a tumultuous fortnight, too.

Mikel Arteta clasped his hands to his neck in further horror as Dani Ceballos saw red but he had called for big moments under pressure and after Bukayo Saka’s brilliance, Nicolas Pepe delivered from the penalty spot.

Arsenal are alive in their Europa League semi-final tie, alive in the competition that could yet salvage a mid-table season.

Tenth in the Premier League with five games to go, this is the only real route left to familiar European territory; they have not missed the turn for 25 years.

And this is Arsenal right now: the inspired and the inexplicable, the energy and the antagonism, the apologies and the assertions, the deflation and still the hope. 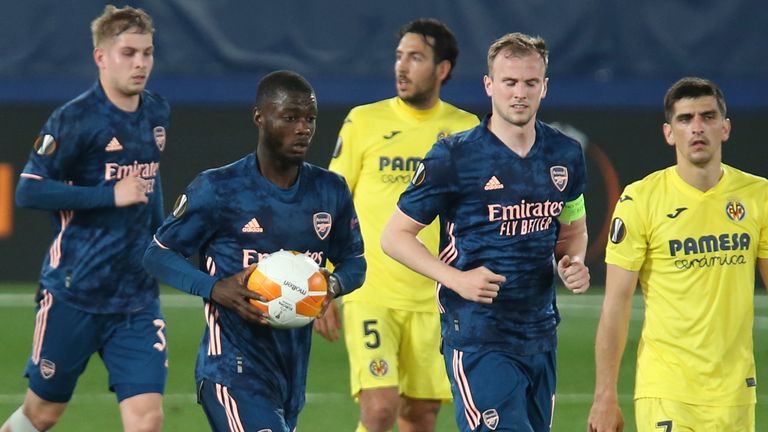 The high-octane demolition of Slavia Prague in the previous round was a tantalising reminder of the capabilities of Arteta’s transitional squad in knockout football.

And yet their Premier League defeat to Everton, amid fan protests against the club’s owners and the derailed European Super League, served its own notice; of their continuing struggle when it comes to the long slog, of individual errors and collective lapses.

And amid the maelstrom of the present, Arteta is determined to plot the future.

“I’m really focused on what we have to do now: finish the season as strongly as possible and try to get into that final, which is going to be key for us,” he tells Sky Sports, speaking from Spain after a morning trying to dissect the night before.

“Where we want to get to will depend on a lot of things; how we end the season, where we end up, what ability and prospects we’ll have for next season. Everything is a reflection of what happens now.” 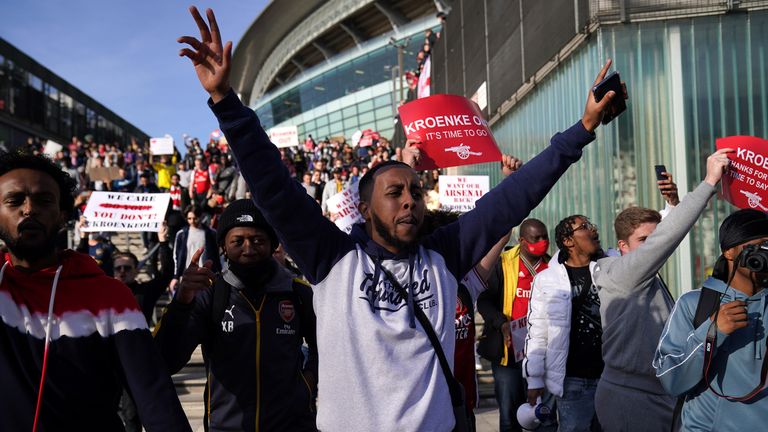 Only time will tell how that translates to the transfer window but Arsenal’s dealings are sure to be scrutinised in what is shaping up to be a pivotal summer.

Despite the promise of a takeover bid from Spotify’s billionaire owner, Daniel Ek, alongside club legends Thierry Henry, Dennis Bergkamp and Patrick Vieira, owners Stan and Josh Kroenke say they have no intention of selling.

The club’s strategy of self-sustainability and subsistence off its own cash flows has long met with supporter discontent, hostilities heightened by redundancies during the pandemic and the club’s later role in that ill-fated breakaway; “a mistake,” the board wrote to fans in an open letter.

But the Kroenkes’ statement in response to Ek’s move was bullish.

It declared their “ambition… to win the biggest trophies… to improve competitiveness on the pitch,” as well as attempting to heal wounds. At a recent fans’ forum, Josh Kroenke said he was “excited” about the club’s summer plans. 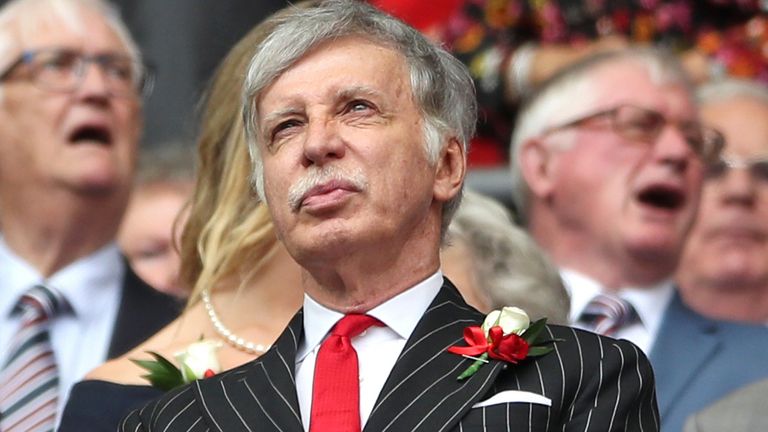 “I’ve been really encouraged,” admits Arteta. “I feel really positive about what we are going to do.”

Despite significant squad reshaping in January, another summer of remodelling looms.

David Luiz is out of contract, Martin Odegaard and Dani Ceballos are due to return to Real Madrid and Alexandre Lacazette will soon enter the final year of his current deal.

The likes of Hector Bellerin and Eddie Nketiah have been touted as potential fund-raisers and decisions loom on the likes of Matteo Guendouzi, Lucas Torreira, Ainsley Maitland-Niles and Joe Willock, who has impressed at Newcastle: “It was a difficult decision to let him go but he needed more game-time. He has a chance [here].”

Could it be the most important summer in years?

While the extent of summer investment remains to be seen, Arteta believes the arrival of Richard Garlick as head of football operations to work with him and technical director Edu is one strategic move that will translate in time to the pitch.

“We’re excited to have him on board soon. We were looking for someone with the right experience, with knowledge of the league and with the contacts to make us better in the team. His expertise is going to be really important.” 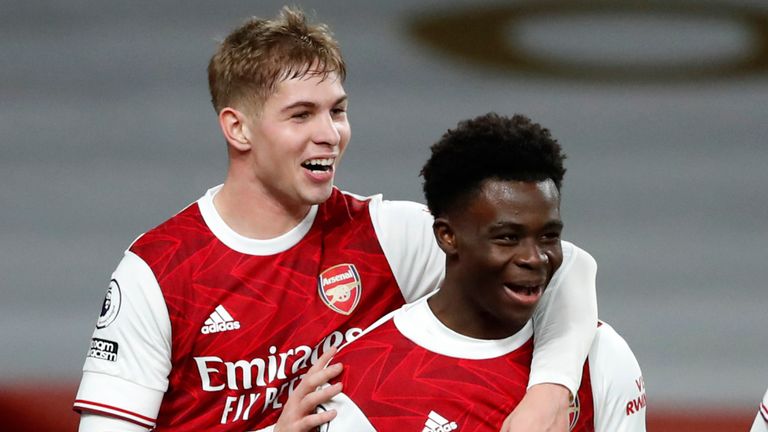 Foundations are being laid elsewhere.

Bukayo Saka signed a new long-term contract last summer. Protracted talks to keep hold of Folarin Balogun have concluded with the same result. Emile Smith Rowe, whose creative spark has been one of the brightest themes of a largely grey campaign, is contracted to the club until 2023 but could soon sign an improved extended deal.

“We are going to have that discussion,” Arteta confirms.

“I think Emile has earned the right to look at that situation because of the performances that he has produced. He’s very much engaged and wants to continue with us, that’s for sure.”

Arteta’s commitment to youth shows no sign of waning but he is realistic about the task of rebuilding a side capable of mounting a legitimate challenge at the top, even though the underlying numbers show steady progress at both ends of the pitch. 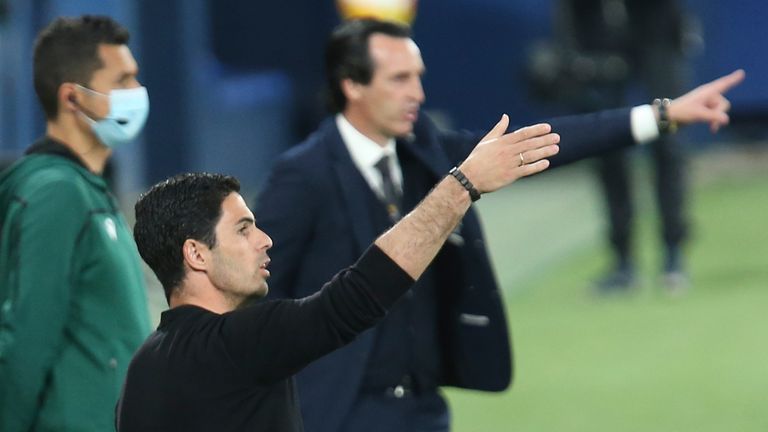 As they prepared for their Europa League reunion, Emery urged Arsenal to “trust and have patience” with his Emirates successor when asked about scrutiny of his position.

Arteta will not say it so explicitly but after weathering a series of storms in his rookie managerial career, there is the sense he feels he might be more fairly judged in a post-pandemic season.

“I will say there’s still a long long way to go to get to where we have to get. [The timeframe] will depend on what we do.

“We’ve shown in big moments against big teams that we can beat anybody but the reality is that we haven’t showed that consistency every three days.

“We’ve faced many challenges, some we didn’t expect, some of them completely unprecedented in the outside world and at this football club. To manage all that is pretty difficult. It’s created unsustainability and instability.

“People will judge what we do today but lots of elements are contributing. I haven’t had a normal season yet. Without a proper pre-season, we had some instability, and [we need] our fans back in the stadium… I cannot wait for that.”

Reconnecting with those fans seeking to reclaim their voice, to challenge the perceived architects of decline is, for Arteta, the psychological rebuild.

“We really need them; to be with the team, to believe in the team, to support them. With them closer, we are much stronger.

“That’s what we ask them and we promise them we’ll give everything we can to fulfil their expectations, to give them some joy and some special moments.”

A big summer might be needed if Arsenal are to start serving them up with frequency but improbably, they could yet conjure one before the campaign’s final whistle.