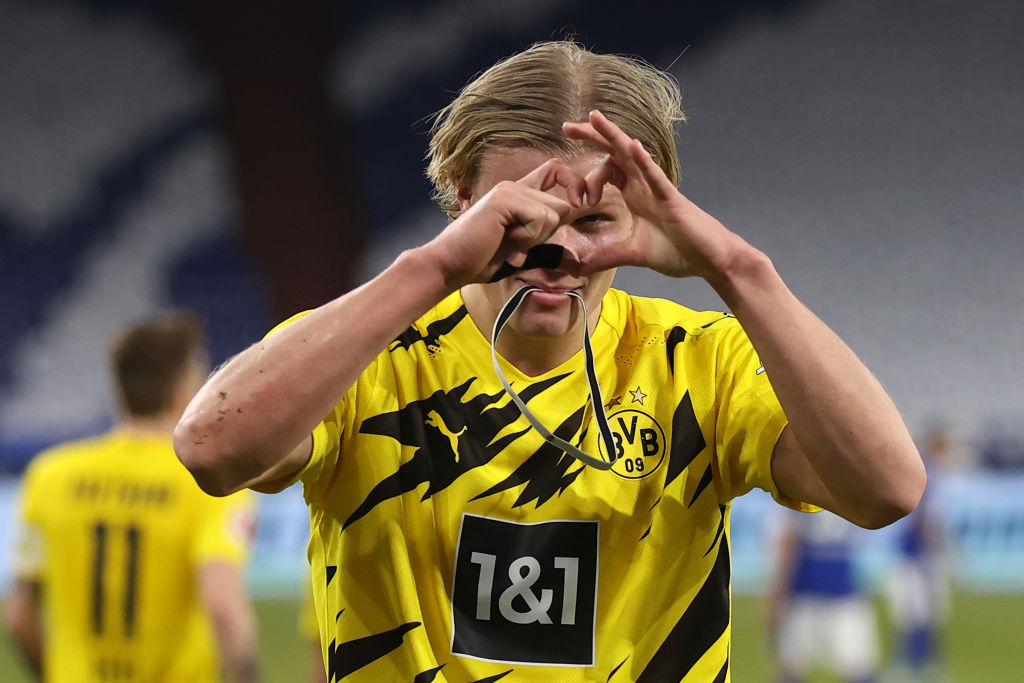 Erling Haaland’s agent Mino Raiola says there are four Premier League clubs who could compete for the Borussia Dortmund star’s signature and says ‘everybody is looking’ at the in-demand forward.

The 20-year-old has netted 17 goals in as many Bundesliga appearances this season – as well as eight goals in just five Champions League outings – and is on the wish list of a host of European giants.

Manchester United tried to sign Haaland before he joined Dortmund, while Chelsea and Manchester City have emerged as transfer rivals, and Raiola expects Premier League clubs to be at the centre of the tug of war to sign the striker.

‘The problem that I feel you have in England, especially in England, whenever I tell my opinion – just an opinion that I have – everybody in England goes berserk,’ Raiola told BBC Sport when asked about Haaland’s future.

‘I am the worst agent, or I am the best, it doesn’t matter, you have people that love you or people that hate you – or 80% hates me, 20% loves me or whatever.

‘And clubs get so much stress and stressed out by it, especially from the public and the journalists, that I’ve learned not to talk so much about it, only during the market.

‘It is obvious though that everybody is looking at Erling as one of those potential new future stars because it’s so difficult to do what he does at his age at his level.

‘He will be one of the future stars of the next decade because we see that stars such as Ibrahimovic, Ronaldo and Messi are coming to an age where everyone asks themselves: “How long can we still enjoy them?” So everyone is looking for the new generation.

‘It’s obvious that only maybe a maximum of 10 clubs can afford to buy [Haaland] from Dortmund so we can all fill in those clubs.

‘And four of those clubs are in your beautiful country [England]. And you can fill them in, you can call them and ask “Would you be interested?”

‘I don’t think there’s a sports director or trainer in the world who would say “I am not interested”. It’s like saying: “Is there a Formula 1 team who would not be interested in having Lewis Hamilton?”’

Haaland has a £68million release clause which becomes active in the summer of 2022, though Dortmund could be moved to sell him earlier – and for a bigger fee – if they fail to qualify for the Champions League this season.

Radical plan to merge League Two and the National League

Raheem Sterling one of the world’s best, says Vincent Kompany