Matildas coach Tony Gustavsson wants his players to use the disappointment from losing out on an Olympic bronze medal to spur them to success in the World Cup in Australia in 2023.

“I said in the circle [after the game] that I hope we never forget the feeling we felt after this loss because that feeling, we never want to feel again,” he said after the 4-3 defeat to the USA on Thursday night. 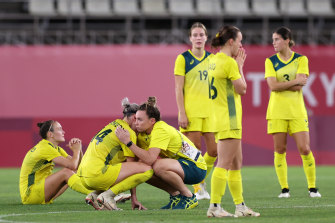 The Matildas leave Tokyo without a medal.Credit:Getty Images

“We want to use it as fuel to make sure we work really hard to get better so come that World Cup in 2023 we want to have the feeling we had when we played GB [when the Matildas won 4-3 in the quarter-final], excitement and celebration to win.

“Personally I will never forget the feeling … you don’t remember what someone said … what you did, but you will definitely remember how you made them feel, and this feeling is probably never going to be forgotten.

“But there is also a feeling of pride [about finishing fourth]. The way these girls fought, their never-say-die attitude they have shown, the football they have showcased and played.”

That was why there was little surprise about the record ratings that the Matildas were generating back in Australia, he said.

“The reason the viewing numbers are sky high with people watching this team is that they show that they wear their crest on the chest.

“They always give their best and the passion and the belief and what lives in this team in terms of the never say die attitude means we connect with a lot of hearts our there.”

Matildas veteran Steph Catley said that while there had been positives about the way Australia had performed, the end result was one of disappointment.

“It’s hard to say it was a success. A success would have been a medal. That was our goal from the beginning. But I would say we have gained a lot, learned a lot and come a long long way from where we were,” Catley said.

“I think it’s only up from here with the tournaments to come and this team is just going to get better and better. We have semi-final experience which we have never had before which is a gain but right now it’s hard to say it was a success.

“The heart we showed, the way we played for each other, by the time we got to these last few games we were all completely on the same page and playing the football we know we can play,” she said.

“This is just what we are capable of in a couple of months together leading to the World Cup and other major tournaments coming up I can’t wait to see what we can do.

“We have always felt the love back home, but with our performances and the way we have been playing it’s really captured the hearts of Australians and we have been seeing it with the numbers who have been watching us.”

Caulker opens up about his drinking and gambling problems