Newcastle 0-1 Brighton: Beram Kayal scores solitary goal to seal valuable three points for Seagulls and pile the misery on Rafa Benitez as Magpies remain without a win all season

The records, none of them desirable, are plentiful. But perhaps this is the most damning for Rafa Benitez – his results are worse than Steve McClaren.

The Spaniard is now the only Newcastle manager to go nine without victory from the start of a Premier League season, one game more than the hapless McClaren three years ago.

Benitez arrived in March of that campaign and inherited a team of misfits who were ultimately relegated. This vintage, however, look even less equipped to survive. 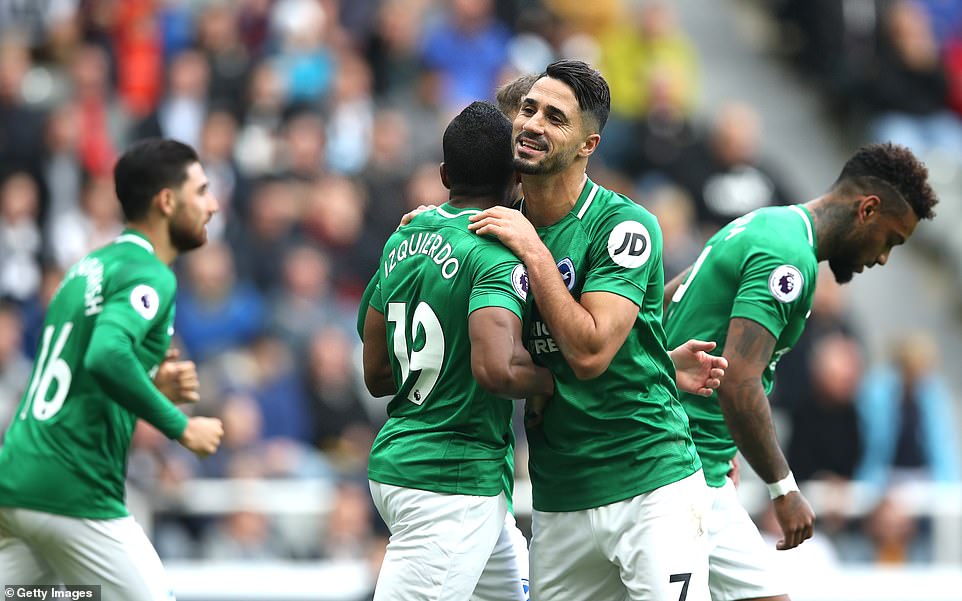 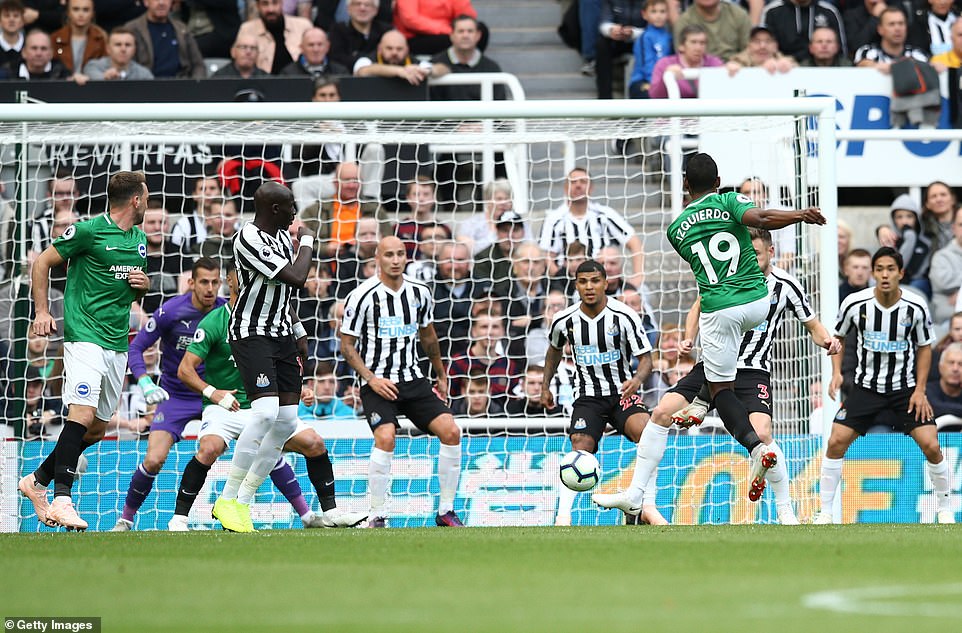 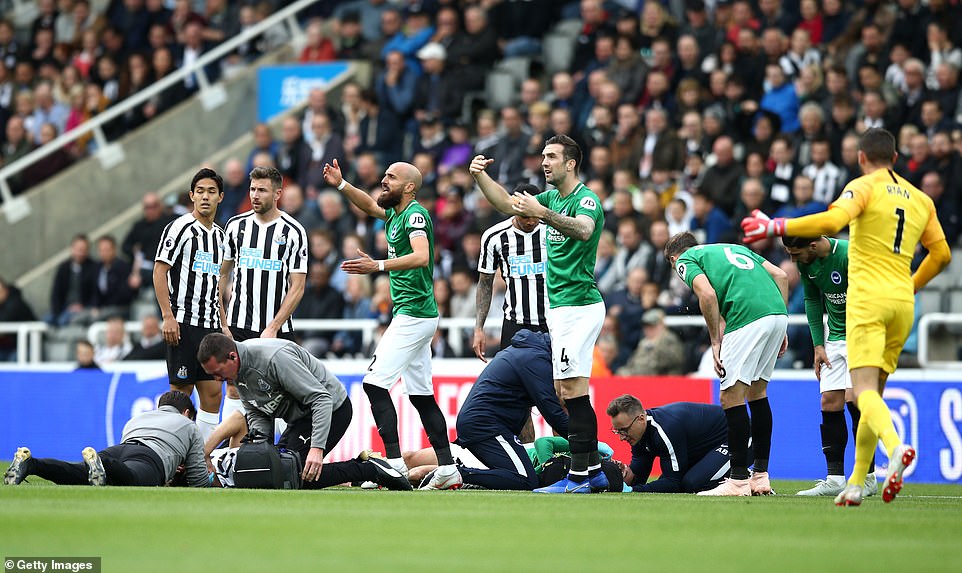 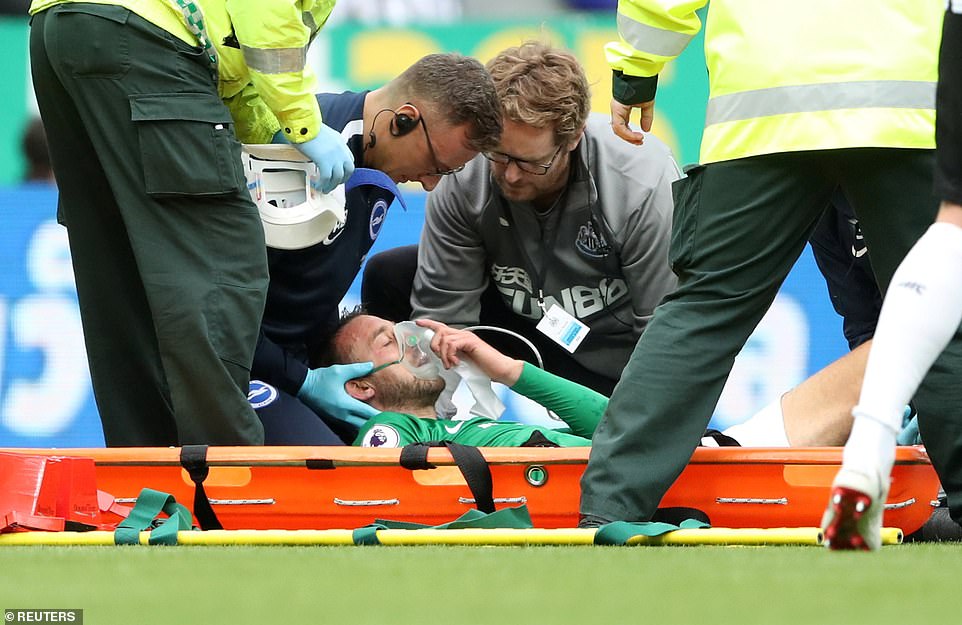 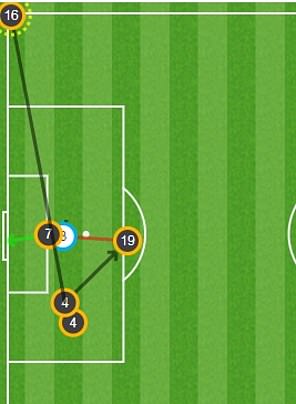 Back to the records. This is the only time in 126 years of existence they have lost their first five home games and it is their worst-ever top-flight start. Benitez’s name is entering the history books with each passing week, although surely only in pencil, for the chances are this team will set another unwanted record next time out.

Yes, Benitez argues with some justification that the fixture list has been unkind, but this was a true test of where they are at right now – and that is bottom of the Premier League.

Brighton had not won away in 17 attempts and boss Chris Hughton last enjoyed victory here when in charge of Newcastle, a 5-1 thumping of Sunderland eight years ago.

How distant a memory days such as that now are for the home masses, who booed a Benitez substitution and also turned on owner Mike Ashley in the second half.

And that is a source of argument among supporters right now. There are those who blame Ashley’s neglect and refusal to invest significantly in the playing squad, but there are also a growing number who believe Benitez should be doing more with those at his disposal.

It was certainly baffling to see a series of hopeful punts launched towards diminutive front pairing Ayoze Perez and Yoshinori Muto after Brighton took the lead on 29 minutes through Beram Kayal. 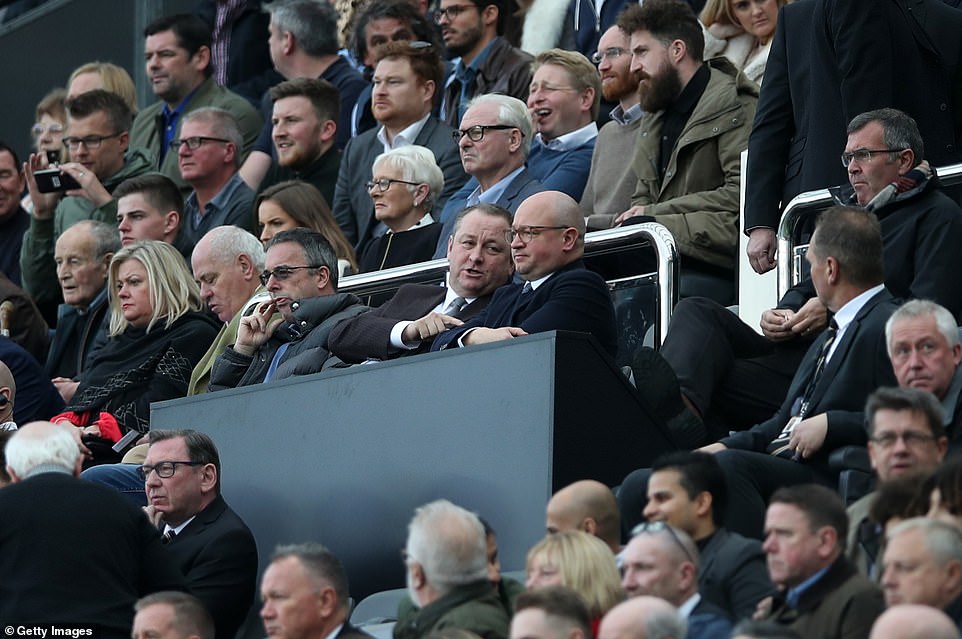 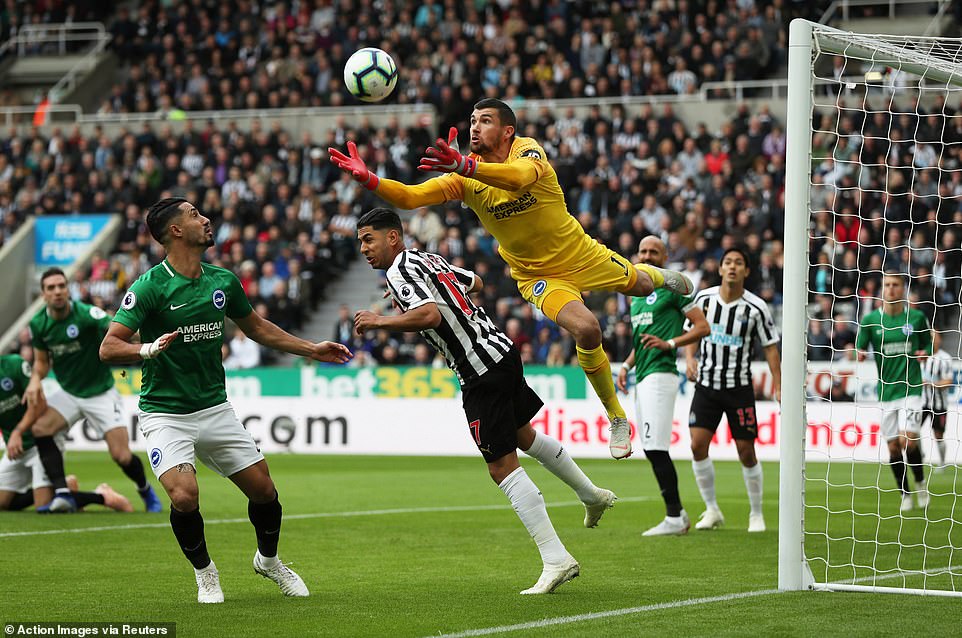 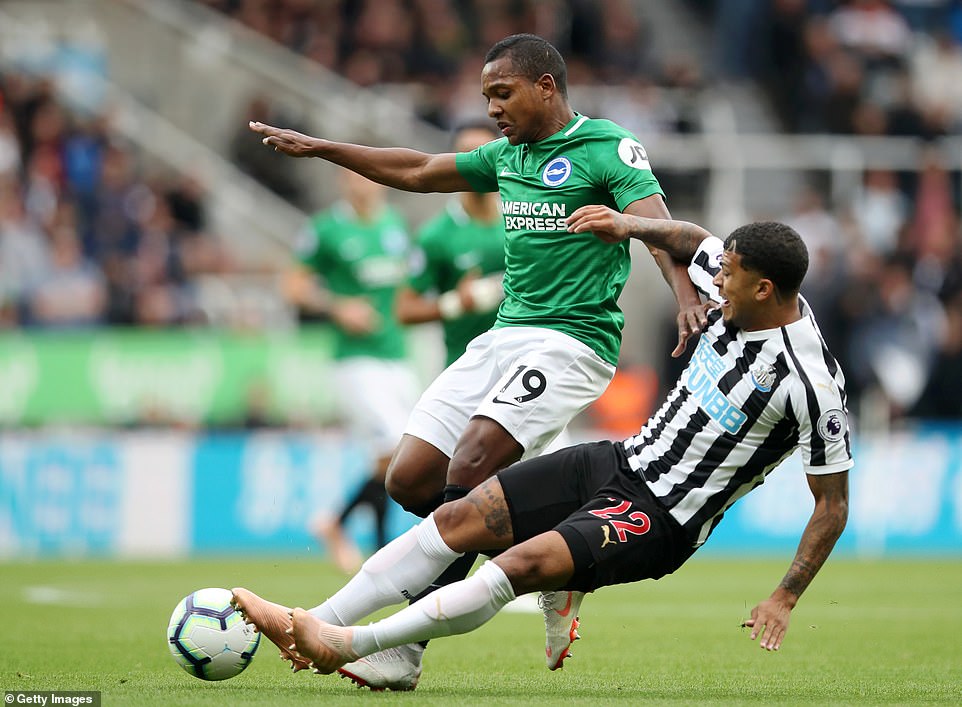 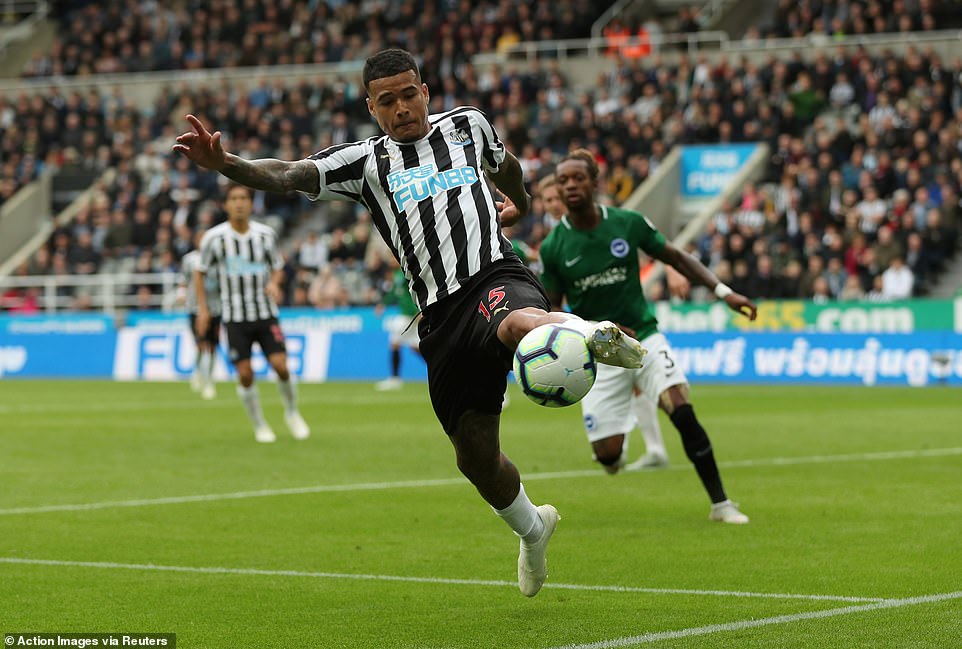 The ease with which centre-backs Shane Duffy and Lewis Dunk coped with such offensives was in stark contrast to the growing desperation of the hosts.

Benitez emerged to defiantly reference the 27 shots attempted by his side, but 21 of those failed to find the target. One of them, by substitute Joselu, hit the corner-flag, while an ill-timed Rabona effort from Kenedy just about summed up the hopelessness of their pursuit of parity.

‘Everyone can see that the team tried everything,’ sounded Benitez, and he was right.

‘We had 27 attempts, we had control, they had a corner, which wasn’t a corner, and they scored.

‘We have to be more clinical in the final third. Everybody is a bit down now. We have lost a game we deserved to win.’

This did not feel like the injustice portrayed by Benitez. Yes, Brighton’s corner which led to the opener should have been a goal-kick, but you still have a chance to defend it. Likewise, 27 shots do not merit a goal if the majority of them have supporters in the low rows ducking for cover. 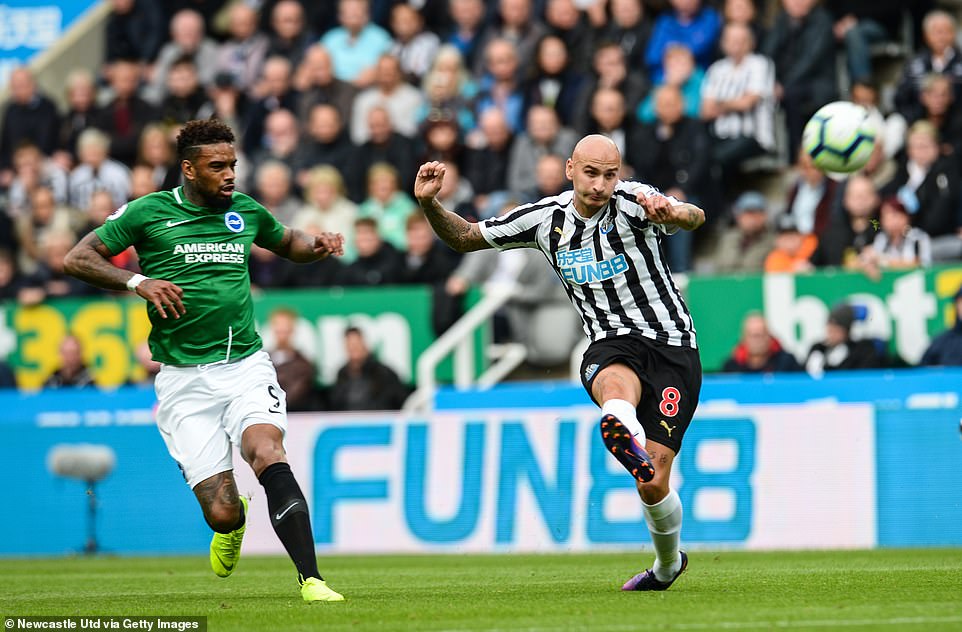 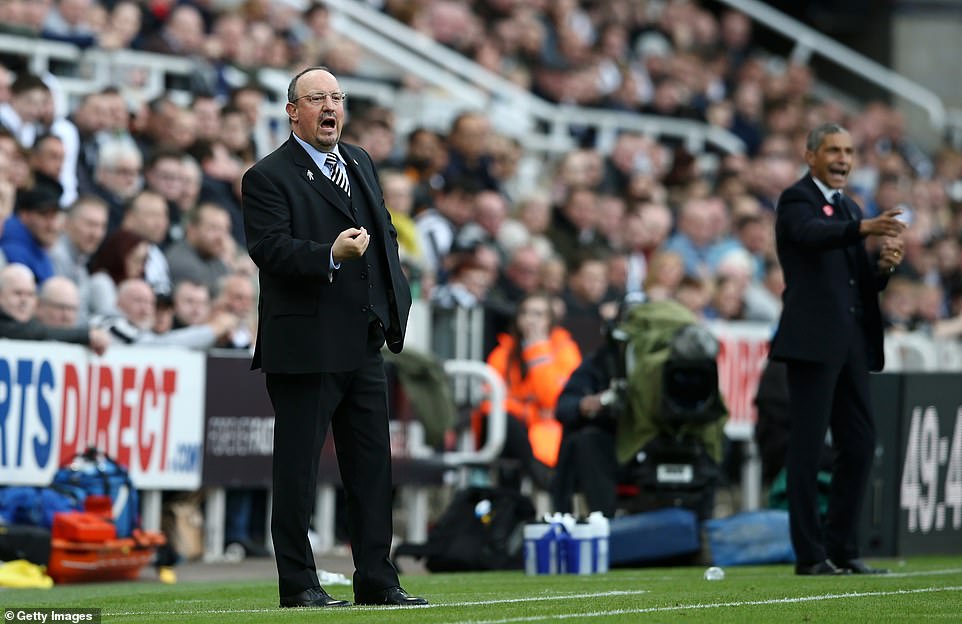 Benitez added: ‘It is difficult but it is a long race. We have to keep going and find a way to score goals. I am still convinced we can stay up.’

Newcastle had started well – Ayoze Perez should have scored only to shoot straight at Mat Ryan when clear on goal – but an eight-minute delay to allow for treatment to Glenn Murray halted their momentum, that is how fragile confidence is right now.

The Brighton striker was taken to hospital after being knocked unconscious following a clash of heads with defender Federico Fernandez. Hughton later confirmed he had been discharged, which was a relief given the panicked concern from players on both teams after Murray crashed to the turf.

It did, though, give Brighton some breathing space after what had been a breathless start and, with Newcastle having lost all of their early purpose, the visitors led when Jose Izquierdo’s blast deflected off Kayal and spun beyond Martin Dubravka. 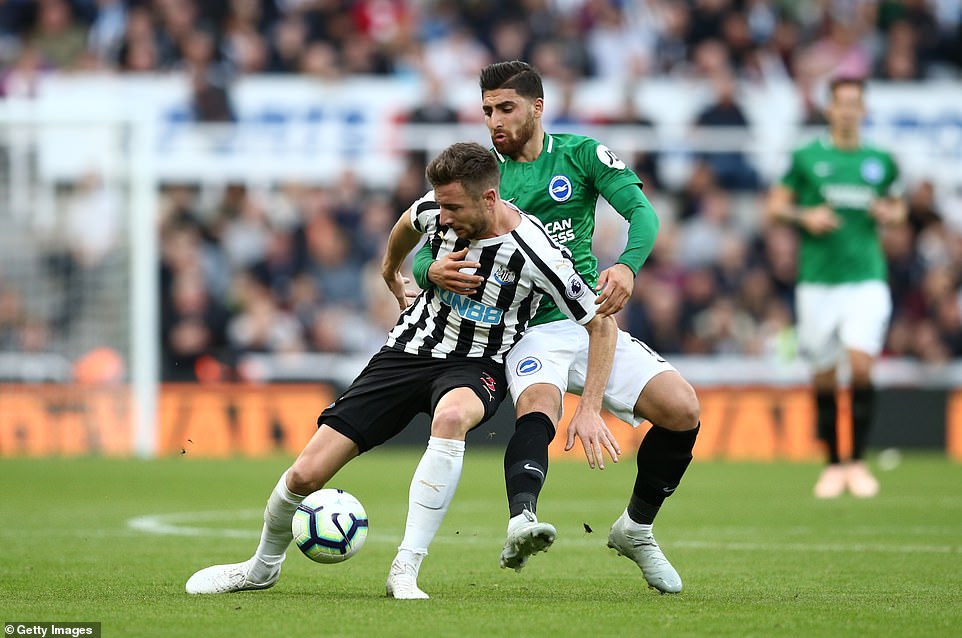 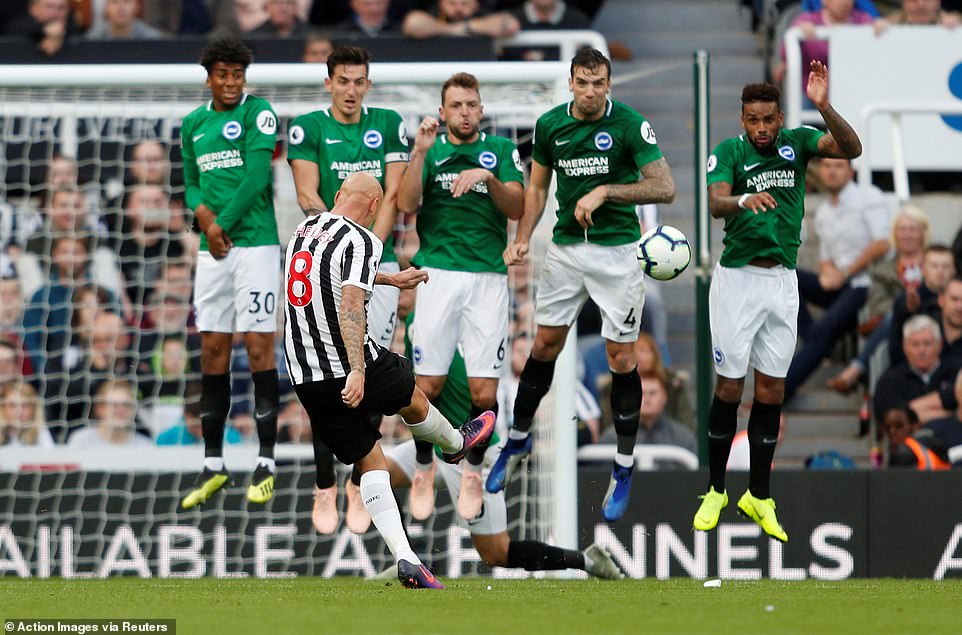 Shelvey whips a free-kick over the jumping wall of Brighton during the second half, but his effort missed the target

‘It’s a big victory for us that we had to earn,’ said Hughton. ‘We were up against more shots than we would be in a normal game, and that’s a side desperate to get a result.’

Newcastle’s best efforts both came via Jonjo Shelvey, a weaving dribble which ended in Ryan saving his low steer before a late free-kick was repelled by the Australian goalkeeper.

There were jeers on full-time and, should this run persist, Ashley could well act, especially as Benitez looks set to quit next summer when his contract expires.

But Hughton offered: ‘One thing that’s obvious is they have got quality on the pitch and I’d always be confident that Rafa will turn it around.’

Such confidence, however, is starting to erode on Tyneside.

England vs Wales a farce amid Covid-19, social distancing and hectic calendar

Benzema won the Ballon d'Or by a whopping 356 votes