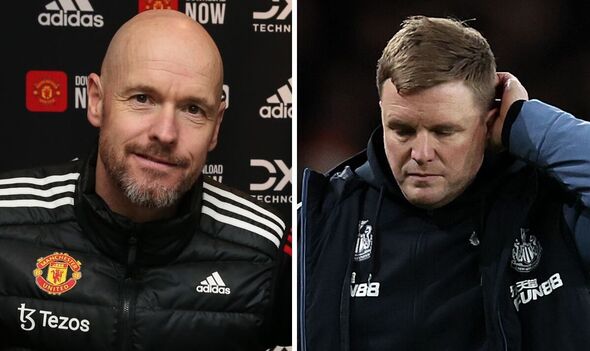 Newcastle have reportedly been dealt a blow in their hopes of signing Marcus Thuram this month with Manchester United now leading a four-horse race for the attacker’s signature. The Magpies are flying high near the top of the table at the halfway stage of the season with only Arsenal and Manchester City above them.

It’s been a radical upturn in form over the past 12 months as they were in the relegation zone in January last year. They’ve since spent around £200million in the transfer market with the financial backing of their new owners.

And Newcastle now head into the business end of the season hoping to upset the apple cart even more by finishing inside the top four. Newcastle’s big spending is expected to slow down this month, but they’re still scouring the market for potential bargain deals.

Thuram had been identified as a possible cheap option given his expiring contract at Borussia Monchengladbach. While the 25-year-old predominantly plays through the middle at club level, he’s been deployed out wide by Didier Deschamps for France.

That versatility would make him a solid option in Newcastle’s attack, particularly with both Callum Wilson and Alexander Isak struggling for fitness this season. But it appears as though Newcastle may have to give up on signing Thuram altogether.

According to transfer expert Christian Falk, Thuram now ‘won’t sign at Newcastle’ due to the sheer amount of options he has elsewhere. Thuram is said to be happy to remain at Monchengladbach unless a ‘big team’ comes in for him.

The Frenchman doesn’t appear to consider Newcastle in that exclusive list with four teams mentioned. United are named as the only Premier League team under consideration by Thuram and his representatives, along with Bayern Munich, Inter Milan and Paris Saint-Germain.

Monchengladbach have tried and failed to convince Thuram to sign a new deal with the Bundesliga side. But they’re prepared to lose him for free this summer unless they receive and offer too good to turn down this month.

It will come as a blow to Newcastle and Howe, who are said to be looking to bolster their attacking unit in the January window.

STEPHEN McGOWAN: Ramsey signing has failed to hit the mark at Rangers