Hopes are rising that the Socceroos could resume their World Cup qualification mission on home soil as anxious A-League clubs await clarity on whether their star players could be called up during the finals.

Australia’s men’s national team is in the midst of its longest period of inactivity in almost 50 years, and won’t reassemble until June, when their four remaining fixtures in the second round of qualifiers for the 2022 World Cup will be played in a centralised hub. 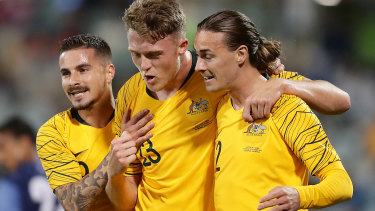 It’s been a long time between drinks for the Socceroos.Credit:Getty

Football Australia had all but resigned themselves to that hub being overseas, but sources say positive discussions with the NSW government in the past week have prompted a more optimistic outlook about the potential for matches being played in Sydney and surrounds.

The Wallabies and men’s Test cricket team have managed to host internationals in Australia since the pandemic but the Socceroos haven’t done so since October 2019, due to difficulties getting overseas-based stars back into the country.

For the hub to happen in Australia, the Socceroos – and Group B opponents Kuwait, Jordan, Nepal and Chinese Taipei – would need to be able to train and play matches during the mandatory 14-day quarantine period for all new arrivals.

It remains a tough ask, but the most recent talks with NSW authorities have not closed the door on the prospect entirely, while Football Australia is also exploring if vaccinations could make it any easier for players to get into the country from abroad. 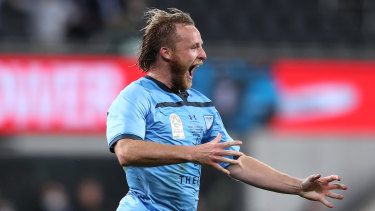 Sydney FC star Rhyan Grant is one of several Socceroos in the A-League who could be called up during the finals.Credit:Getty

“Football Australia is excited about the possibility of hosting the centralised hub in May-June and will submit a plan to government for assessment before communicating with the AFC regarding Australia’s capacity to host,” an FA spokesperson said. “We have been, and remain, engaged in constructive dialogue with Government throughout this process.”

A-League clubs are monitoring the developments closely amid fears Socceroos coach Graham Arnold could take away their best players at the most crucial time of the year.

At least one major issue that could have impacted the integrity of the competition has been dealt with – it was announced on Thursday that the start of the AFC Champions League’s east zone will be postponed until after the A-League season, ensuring that Sydney FC won’t have to leave the country in April as originally slated, which could have wreaked havoc with scheduling. Melbourne City and Brisbane Roar had also secured qualifying slots for the ACL, and were due to play visiting teams at home in less than a month’s time.

But the June international window will clash directly with the A-League finals series, and Arnold has already declared his intention to pick not only the best available players but an enlarged squad of up to 34 to cope with the extra physical load of four matches within 12 days.

A spokesperson said Football Australia would “collaborate” with the Australian Professional Leagues on the matter. This season’s A-League fixture does not observe international breaks, a decision made because of the pandemic and the timing of the revised broadcasting deal with Fox Sports, which ends in July.

As things stand, clubs around the world can block players from international duty if they have to serve a period of five days or longer in quarantine upon their arrival into a country or return home – but that edict from FIFA is only in place until the end of April, and it’s unclear if it will be extended.

Meanwhile, the APL is set to release the schedule for the remainder of the A-League season in the coming days – except for the final four rounds.

The fixtures that will be unveiled will take teams to 22 games played, or two full home-and-away rounds. The extra chunk of matches, in which some teams will play each other for a third time, will be held back as late as possible for integrity reasons – just in case a COVID-19 outbreak somewhere in the country forces the season to be cut short.