After winning promotion as winners of the Championship in his first season at Wolves, Nuno Espirito Santo has taken the team to consecutive seventh-place finishes in the Premier League. But what is the thinking behind his 3-4-3 formation and how does it work?

In an exclusive interview with Sky Sports’ Rob Wotton, the Wolves boss talked us through how his team’s shape in attack and defence, looking at the ways it has worked for his team.

Coady playing out from the back 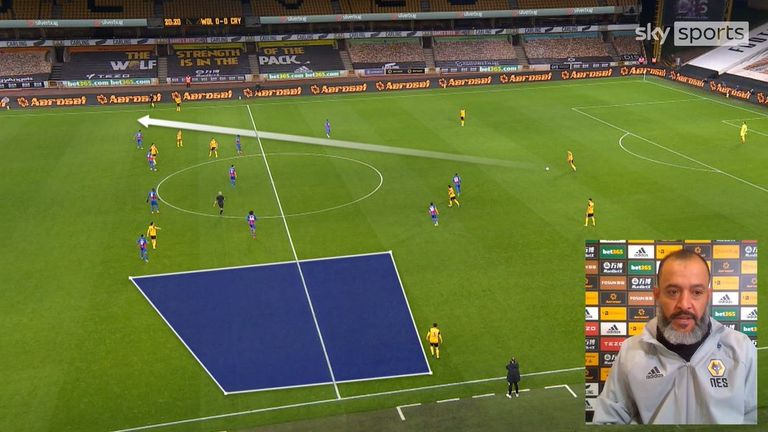 “We try to get the advantage from Conor and the width of the full-backs,” says Nuno. “It is a good way to achieve progression on the pitch through a long ball that Conor does very well.

“It is one of the lines and the patterns that we have established in the team since the Championship, the width of our full-backs.”

That was apparent in the win over Crystal Palace last time out at Molineux when debutant Rayan Ait-Nouri opened the scoring for Wolves with a shot from the left channel.

“It was the first game for Rayan so I was very, very pleased and happy for him. I think for him to score his first goal in his first moment of the Premier League was huge for him.” 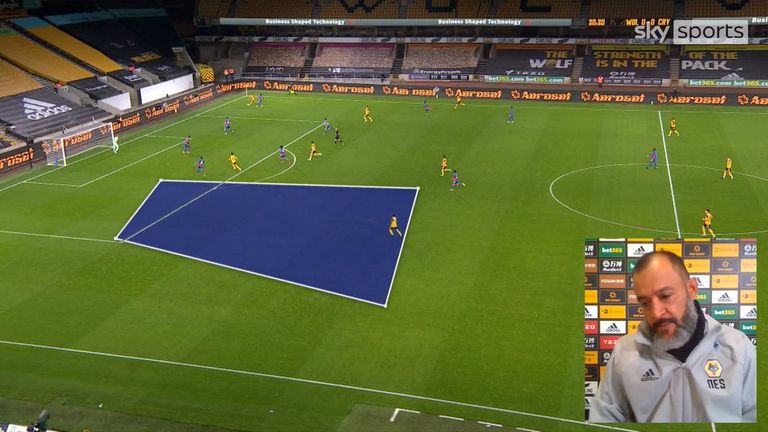 While Wolves’ shape is routinely described as a back three, that swiftly becomes a back five when the team are out of possession. Only Liverpool and Manchester City have a better defensive record in the Premier League since the club’s return to the top flight.

“When you attack you have to have width, when you defend you have to be compact,” Nuno explains. “So this is the shape of the team when we are defending.

“We have to be compact, close to each other, knowing that the outside [space] is there but the moment it goes we are there to engage on our defensive process. But the main idea is to be compact when we defend and achieve maximum width when we attack.” 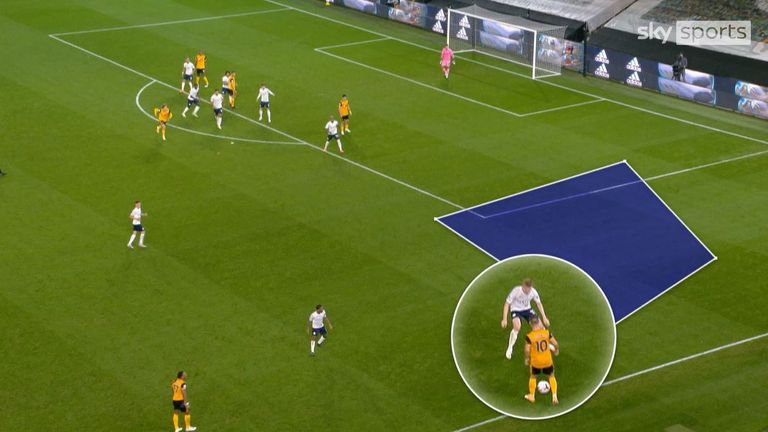 Wolves have some of the more potent dribblers in the Premier League with Adama Traore having completed more dribbles than any other player in the competition since the start of last season. He is not the only player capable of beating a man either.

“Adama can do it, Rayan can do it, Pedro (Neto) can do it,” says Nuno. “These are the kind of players who, when they engage one-on-one, we can take advantage of it.”

Daniel Podence did just that when nutmegging Kevin De Bruyne before setting up Raul Jimenez to score against Manchester City earlier this season. Finding that space was the key.

“This is one of the moments when you can really imbalance if you have the players who can beat opponents one-on-one,” adds Nuno. “But first of all your organisation has to allow for these players to be isolated in one-versus-one situations. It requires more possession to isolate these players – Adama, Daniel, Pedro – in these situations.”

Having runners in the transition

Although Nuno has outlined his intention to play more of a possession game this season, the counter-attack remains crucial to Wolves. They have had the most fast breaks of any team in the Premier League since their promotion and scored from one within minutes of the new season kicking off when Podence found Jimenez for the opener against Sheffield United.

“The more important thing is the runners,” says Nuno. “The runners are the ones who can imbalance the defence by dragging them with their movements.

“For example, you can see that Raul is already checking what moves are coming so that he knows what space he needs to occupy.

“The player on the ball is basic. You need more runners involved in that action. That will create problems for defenders. The run of Pedro is the one that creates doubt for the central defender, does he go first or does he stay with Raul.

“The runners are the ones who create space for the finishers.” 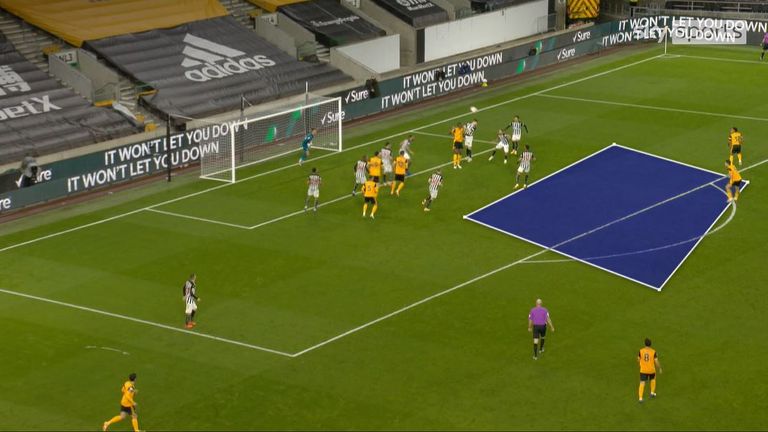 Sometimes the finisher can create space for himself. Jimenez showed that when peeling away from the penalty box to score the opening goal against Newcastle recently.

“In this specific game, Newcastle have big players so in the first moment it is difficult,” says Nuno when asked if this was a pre-meditated ploy to find a way past the defence.

“But it has to do a lot with the instincts of the player. This is the pure instinct of Raul, knowing that the second ball is going to happen more often than us be able to attack one.

“Then the execution is very good. The strike is amazing.”

Assimilating new talent in the system 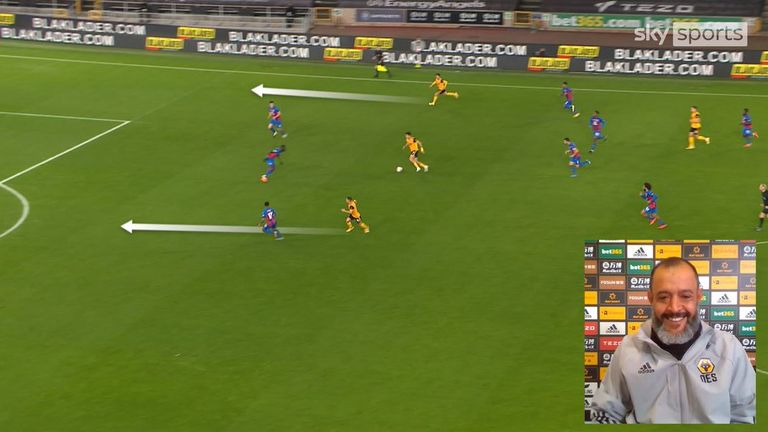 Wolves are undergoing their first significant personnel change since making it back to the Premier League and Nuno acknowledges it is a challenge to make the adaptation.

“This requires a lot of work,” he says. “We do not expect things to happen immediately.

“Our foundation is so well established in ourselves that we believe when we pick a player it is like putting a piece in a puzzle. The foundation is what sustains the player who goes in.”

But when it works it is satisfying… 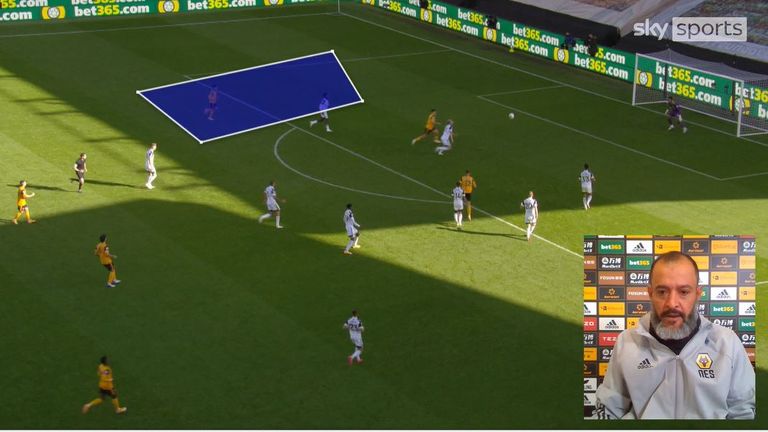 When things go to plan, as they did for Neto’s winner against Fulham last month, there is not only satisfaction but the hope that the belief in the team’s plans will grow.

“We are lucky with what happens on the rebound but what matters is that we are there in the space to take advantage of it,” says Nuno.

“It is hours of work that we have alongside the players and when they achieve what we say it is a big step to believing that we have to do it again, again and again. That creates a routine and an identity of the team.”

And when it does not work so well…

Of course, Wolves have had their setbacks too, most recently when going down 1-0 to Leicester at the King Power Stadium on Sunday. Something Nuno is quick to acknowledge.

“You only pick the good ones,” he laughs.

“This is what we work on more – when things do not work out in defence and offence. We talk more about the bad ones than the good ones.”