Ole Gunnar Solskjaer was frustrated by the way Manchester United blew victory late on and allowed AC Milan to grab a potentially crucial away goal in their Europa League last-16 tie.

Despite being second best for much of Thursday’s last-16 first leg, United looked set to head to San Siro next week in the driving seat thanks to teenage substitute Amad Diallo’s first goal for the club.

The 18-year-old became the club’s fourth youngest European goalscorer thanks to his superb, improvised header – a fine effort that was cancelled out deep in stoppage time.

United’s soft underbelly from set pieces was exposed when Simon Kjaer met a corner with a header that Dean Henderson will be frustrated not to have kept out as the first leg ended 1-1. 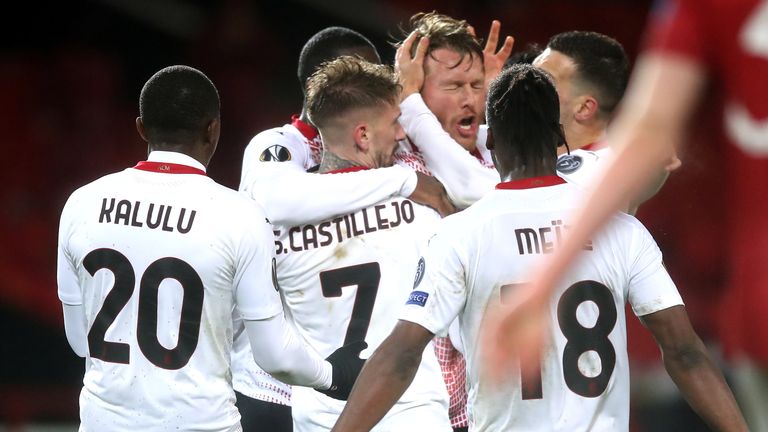 “We dropped too deep in the box so the structure, there’s a yard or two deep from everyone, really,” Solskjaer said of the equaliser. “Of course you’re always disappointed when you concede a goal in that manner.

“Simon Kjaer is obviously a good player, he makes a good run, he’s strong and his marker gets blocked off, so he gets in front of him.

“Disappointed but then again that can happen. I’ve been part of a team that’s scored in injury time in Europe myself on a set play.

“Of course it makes it more difficult. Always when you concede at home, you’re never happy when you do. One minute before full-time is also disappointing but we’ve got to take that on the chin and just travel down there next week and go for it.” 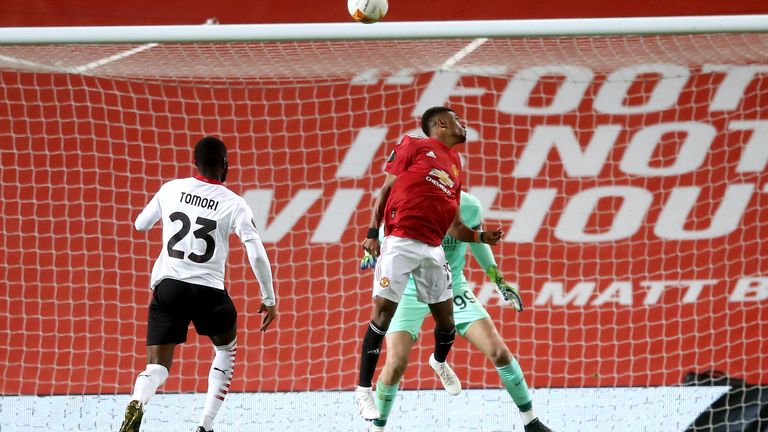 On the impact of the away goal on the round-of-16 tie, Solskjaer added: “It makes it harder but it makes us have to go down there and score goals and win the game.

“That might suit us. It probably will suit us. We’re a team that’s better when we go forward, more direct.

“Today we didn’t win the ball well enough or in good enough positions to find the counter attacks. We were too slow, we didn’t move our feet well enough in our half and they played well, to be fair, as well.”

The United boss confirmed that Anthony Martial was brought off at half-time due to a hip injury, and will need a scan.

Solskjaer also said he is hoping Marcus Rashford will be fit for the return leg in Milan on Thursday, but is likely to miss Sunday’s game with West Ham, live on Sky Sports, due to an ankle issue sustained in the win at Man City.

Edinson Cavani is also unlikely to play on Sunday with a muscular injury, adding to United’s injury issues in the forward line.

“Anthony got a whack on his hip, so there’s another forward we need to scan and look at.

“I desperately hope Marcus is back for next Thursday in Milan, I’m not sure he’s going to make Sunday. Fingers crossed because we’ll need him.

“Edinson I don’t think can be ready for Sunday.”

January signing Diallo replaced Martial at the break and made quite the impression, scoring his first United goal just five minutes after coming on.

“I think the pass was incredible,” Solskjaer said of Bruno Fernandes’ assist.

“I think the pass more or less made the goal, the keeper’s position as well. The flick is probably the only thing he can do and he should do.

“But perfect timing, perfect little weight on the flick. Great moment for the kid.”

Man Utd now host West Ham on Sunday at 7.15pm, live on Sky Sports Premier League, while AC Milan are at home to Napoli in Serie A at 7.45pm on Sunday.

The second leg of this last 16 tie will be on Thursday March 18 at 8pm.