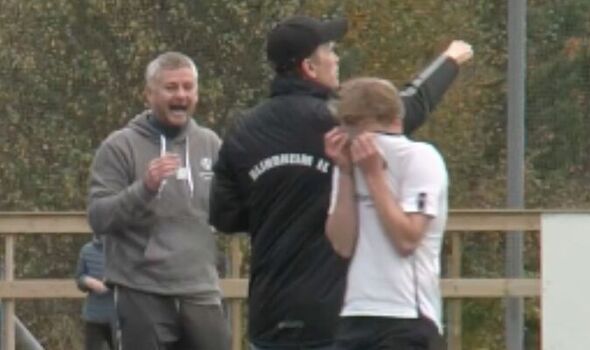 Manchester United legend Ole Gunnar Solskjaer is back in the dug-out – coaching one of Kristiansund’s youth teams in Norway. The former Old Trafford boss, who has enjoyed a prolonged absence from the limelight, is now back in the game in his homeland in a small fishing city that remains close to his heart.

Solskjaer was dismissed by Manchester United in November 2021 after his side were embarrassingly thrashed 4-1 by Watford at Vicarage Road as a turbulent start to the 2021/22 campaign took another unexpected twist.

Since then, he is understood to have turned down several approaches to return to senior management as he continues to recharge his batteries in Norway alongside his family.

But it appears Solskjaer still has the football bug after taking up a coaching role with Kristiansund’s Under-14 side, as pictures emerged online of the former United striker working with his team.

Furthermore, close friend Roy Keane has also made a flying visit to Norway to see how Solskjaer is getting on – even posing for a picture with one young volunteer Leif Kåre Kirksether.

Keane was also said to be in awe of the facilities at Kristiansund as he tuned into a training session laid on by Solskjaer for his young squad before signing autographs.

Solskjaer did not wish to disclose the reasoning behind Keane’s visit during an interview with Nettavisen.

The 49-year-old took charge of his first match in September, per Norwegian reports and his youngest son Elijah is among the players within his squad.

He has been coaching alongside fellow Per Magne Hals and recently told newspaper Tidens Krav: “It should be serious, but it should also be fun. I hope I can contribute to giving the players good habits.”

“Who is the coach or head coach does not play such a big role. I can be an assistant coach.”

The Iran national team are believed to be one of the offers turned down by Solskjaer, who also reportedly received an unnamed proposal from the Premier League.

Just 16 days after extending his contract with Molde, Solskjaer took the United caretaker job in December 2018 following the sacking of Jose Mourinho.

He would sign a permanent contract the following March after his side pulled off a stunning Champions League comeback after overturning a two-goal deficit against Paris Saint-Germain – beating the French giants 3-1 in the second-leg in their own backyard.

His stock was somewhat boosted despite his Old Trafford dismissal when interim boss Ralf Rangnick struggled to make any form of positive impact on the side last season as United recorded their lowest-ever Premier League points tally.

It is currently unclear whether Solskjaer has any aspirations to return to top-level management in the near future despite links to the Norway national team job.