ON THE ROAD: Two big clubs with two big problems… Sheffield Wednesday and Birmingham City do dance of desperation to avoid trapdoor to League One

The roars of relief rang around an empty Hillsborough, accompanied, in the directors’ box, by a flurry of fist-bumps and self-congratulatory slaps on the back among the Birmingham City contingent.

Desperation takes a hold on the likes of Sheffield Wednesday and Birmingham, dancing on the trapdoor to League One — where the mismanaged former Premier League clubs are prone to become entombed. 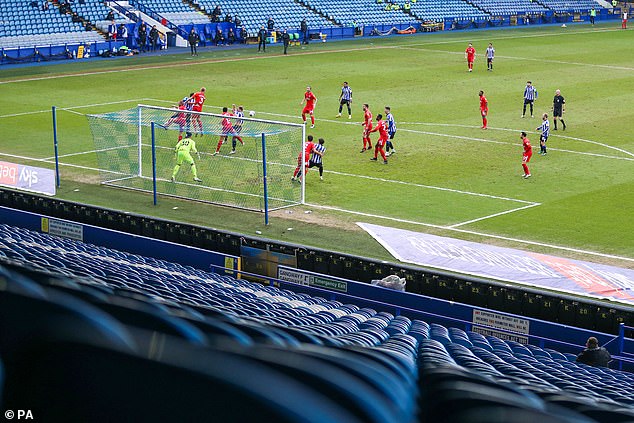 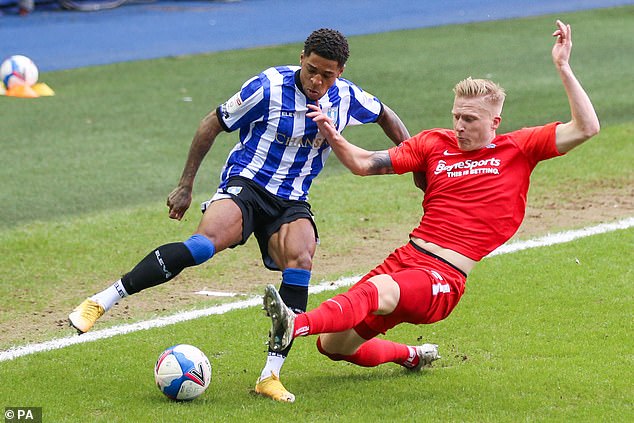 Victory was everything. Aitor Karanka’s team tackled the fixture like a cup final, inspired by a huge banner hung by fans outside the training ground, last week, decorated with images of club legends and urging the players to ‘dig deep’ and ‘play for the badge’.

And by video messages from family and close friends, assembled by captain Harlee Dean and shown at the team hotel on Saturday morning, before the game.

‘The banner was a nice touch,’ said Dean. ‘We all made a point of reading it and taking it in. It was nice to have something positive from the fans.

‘We needed to pick confidence up because this game was so important. I’ve never questioned the desire. We care because it affects our lives and families and it affects the club. 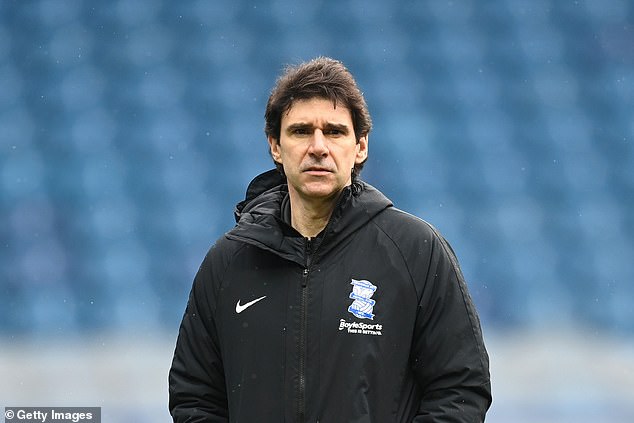 ‘We don’t want to get relegated, no one wants that. We’re working our nuts off day in, day out to make sure it doesn’t happen.’

Scott Hogan’s goal lifted Birmingham out of the relegation zone and their players sank to the floor on the final whistle.

‘We had people saying it was the hardest game they’d ever played in,’ said Dean. ‘The pitch is massive, it’s boggy. It takes it out of your legs and emotionally it does a lot to you.’

The gloom intensifies for Wednesday, who had Liam Shaw sent off by Lee Mason when the game was goalless and had to play for 40 minutes with 10 men. 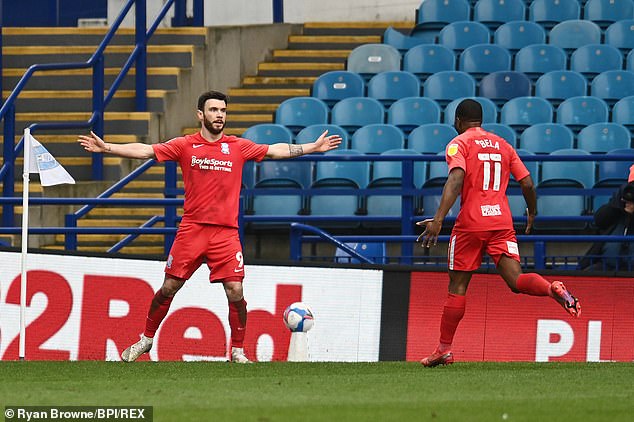 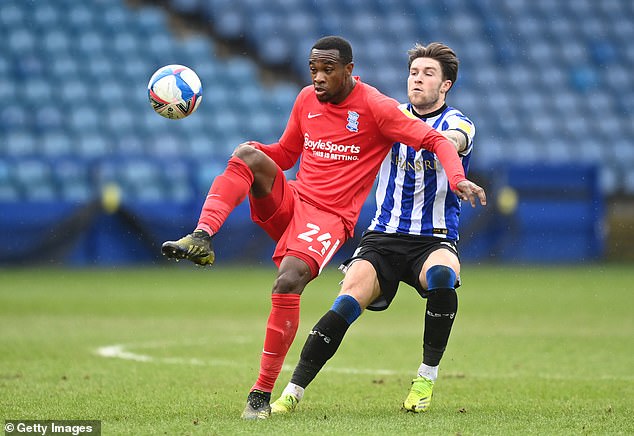 ‘Liam’s an honest lad and he’s devastated,’ said caretaker boss Neil Thompson, but questions are sure to be asked about his faith in a teenager who has signed a pre-contract to join Celtic at the end of the season.

Shaw is 19 and learning at this level. His energy, athleticism and physical presence have been important, but this was his second red card in 80 days.

Both were for rash tackles sure to be filed away under ‘naivety’. But this was costly for a team who have lost three out of four and the momentum generated when Thompson first took charge.

He restored a measure of calm after 45 turbulent days under Tony Pulis, but the underlying problems remain. Just as they do at Birmingham. 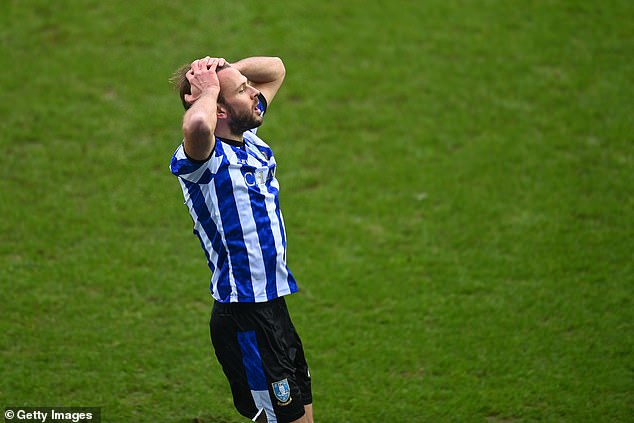 Meanwhile, the gloom intensifies for the Owls who played 40 minutes with ten men

Both clubs are controlled remotely by Asian owners seemingly at the mercy of circling agents and would-be advisers who promise to solve all their troubles. The result is a blur of managers and players, soaring wage bills, bloated squads, chronic instability and financial chaos.

Birmingham had points deducted in 2018-19. This season, it is Sheffield Wednesday.

Under pressure from the first game of the campaign, Dejphon Chansiri has sacked two managers and drifted through the January transfer window with a caretaker in charge — not for the first time.

Two years ago, January was spent waiting for Steve Bruce to finish his Caribbean holiday. Then he lost Bruce to Newcastle and spent the summer market without a manager before appointing Garry Monk. 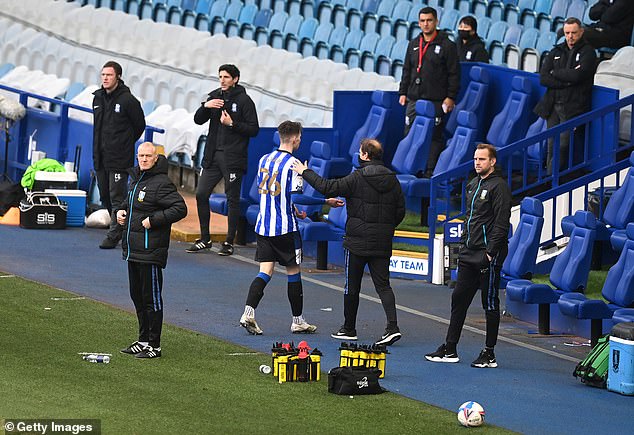 Now the brief post-Pulis glow is over, there is no permanent manager, no chief executive running the operation in Sheffield and the Owls are deep in the mire.

Cohesion is absent and there has been little evidence of long-term strategy since a Thai fortune was lavished on a promotion charge under Carlos Carvalhal.

Pulis threw his weight around in an effort to change things, demanding investment and transfer targets which were simply beyond reach for a chairman already punished for financial rule-bending.

Chansiri, in fairness, has fronted up to criticism, answering questions from the fans and local media. His intentions appear to be good but his club is in a mess and money tight.

He was late paying some players’ wages three times last year and cannot afford to turn on the undersoil heating. 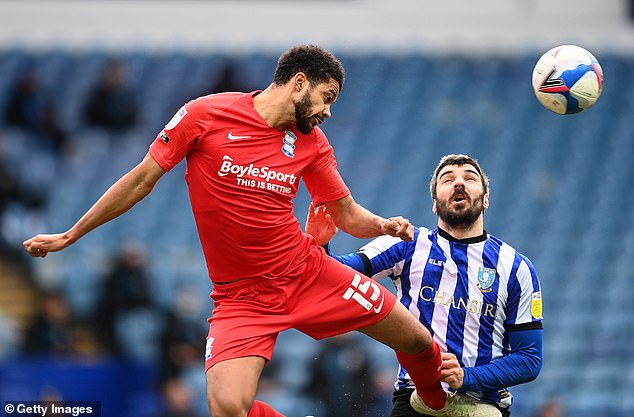 As for Birmingham, their Hong Kong-based ownership is convoluted and obscure and the outlook no less alarming.

Debts are soaring despite the sale of Jude Bellingham for £30million, the fabric of the club is eroded and there are lingering threats to the future of the academy from which he graduated.

They have ended a dismal run of two points from six games and Karanka may have escaped the chop. This was a big win and the players have shown spirit, but this is far from over.

Birmingham face leaders Norwich on Tuesday and Sheffield Wednesday are at Brentford a day later.

Two clubs with too many problems to contemplate the drop into League One must continue their dance of desperation.