Chelsea’s all-time leading goalscorer Kirby, 27, pipped team-mates Sam Kerr and Ann-Katrin Berger to receive the honour for the second time, after winning in 2018.

Man City Women forward Lauren Hemp, who was also in the running for the women’s main award along with team-mates Chloe Kelly and Sam Mewis, won the women’s PFA Young Player of the Year for the third time in her career, adding to her wins in the 2019/20 season and 2017/18 season.

“The fact that players chose me for this award means that I have done really well,” he said.

“You want to win all the trophies with the team and this is probably the most important one as an individual in the league. To be voted be your competitors, by players who you compete with in every game – for them to choose you says a lot.

“They’re the people in my view who know the most about the game. When you have these things you can show your kids and say, ‘Look! This is what daddy did when he was younger'”. Double nominee Foden, who won his first PFA award, dedicated his win to his City team-mates for allowing him the opportunity to shine during a breakthrough season.

“I’m really honoured. There have been some great players in the past that have won it, and I feel really lucky because there has been so many great young talents this year.

The England international, who won the Footballer Writers’ Association Women’s Footballer of the Year award last week, led Chelsea’s attack as they retained their Super League title and reached the final of the Women’s Champions League.

“I think what we’ve achieved has been incredible, so I’m really proud to be a part of it,” she said.

“Hopefully, I will be able to come back into the same kind of position I came into last year. I have been playing like I love the game again and when I enjoy it, that’s when you get the best out of me.”

Meanwhile, Hemp set her own record by becoming the first woman to win three PFA awards in the same category. 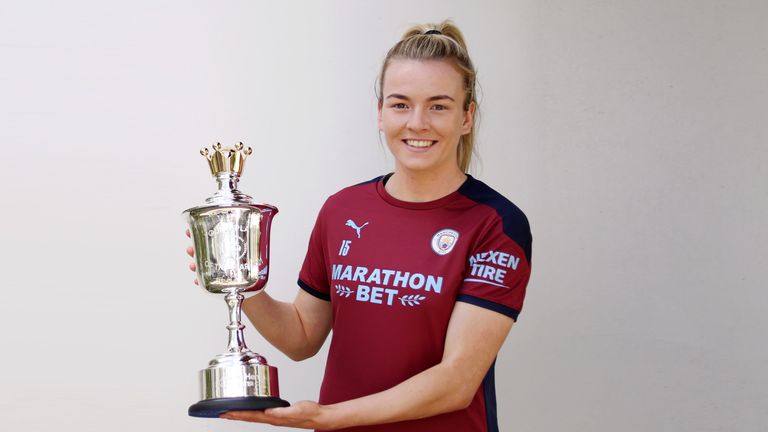 “It feels special, it’s one of the best accolades I can win – it’s a real honour,” she said.

“I’m proud of our team and hopefully next season we can win the league and push further in the Champions League, because I’m here to win trophies.

“I have been fortunate to have some excellent coaches throughout my journey and I hope I can keep on improving because I know I am not the finished product yet.”

Outgoing PFA CEO, Gordan Taylor OBE, received the 2021 PFA Merit Award for his outstanding contribution to football and his unwavering commitment to improving the lives of footballers.

Sir Alex Ferguson presented the award to Taylor, saying: “It’s my great pleasure to present Gordon this beautiful trophy for fantastic service. I would like to thank him for all the help he gave me in my time at United and even back in my days in Scotland when Gordon first started.”