Harry Kane and Mohamed Salah look set to take the Golden Boot race to the wire – so who is most likely to scoop the award?

The pair narrowly lead the pack, but favourable upcoming schedules suggest either the Spurs striker or Liverpool winger will top the goal chart on May 23.

Kane currently leads the way with 19 goals, ahead of Salah with 18, Bruno Fernandes with 16, while Dominic Calvert-Lewin and Patrick Bamford are level with 14.

Form would also back Kane, having netted six in as many games, while Salah has scored a solitary goal in his past six outings. But, in terms of results, the clubs’ current form appears to be heading in opposite trajectories – so could the tables turn?

Despite narrow margins, the current leaders also have the easiest run-ins – in terms of points-per-game ratios of upcoming opponents – suggesting the pair will have more opportunities to extend their goal tallies than fellow rivals.

Surprisingly, Kane is yet to register a hat-trick in the Premier League this season – but his league-topping goal ratio of 0.7 per 90 bodes well for the England striker – who last claimed the Golden Boot four years ago.

Spurs have everything to play for with clashes against top-four rivals Manchester United and Everton over the next fortnight, and Kane will be eyeing scoring opportunities against Southampton and Sheffield United leading into May. 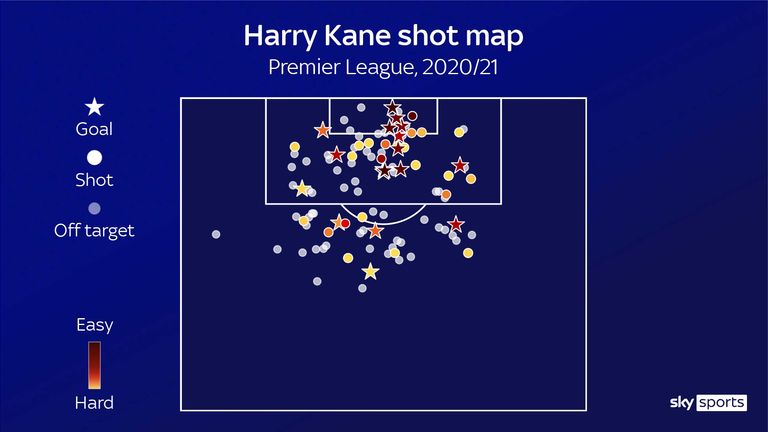 Kane’s shot map above reveals his ability to shoot and score from any range or angle. Expected goals data is used to colour the points and suggests a raft of his goals have defied probabilities.

Liverpool’s title defence has morphed into a top-four battle after an injury-ravaged season, but talisman Mohamed Salah remains the club’s most potent goal threat.

However, the Egyptian went off the boil during the Reds’ two notable barren runs, but also registered low levels of xG – suggesting Salah was perhaps less culpable for missing big chances but, equally, could have failed to create the openings. 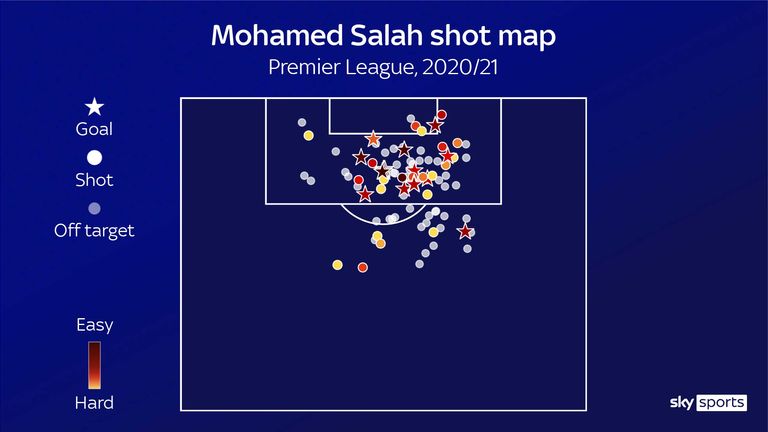 Salah’s shot map highlights his tendency to cut inside from his favoured right flank. In fact, almost all of his league goals have been fired from that half of the pitch, with a cluster of strikes fired from between six and 18-yard lines.

The spotlight dimmed on Fernandes during January but the Portugal international has rekindled his best form to boost United’s chances of shoring up the runners-up spot.

As a midfielder, he is certainly a long shot for the award, while eight of his 16 goals have been scored from penalties. But United are among the free-scoring teams and a late rally, coupled with more spot-kicks, could see Fernandes make a late charge. 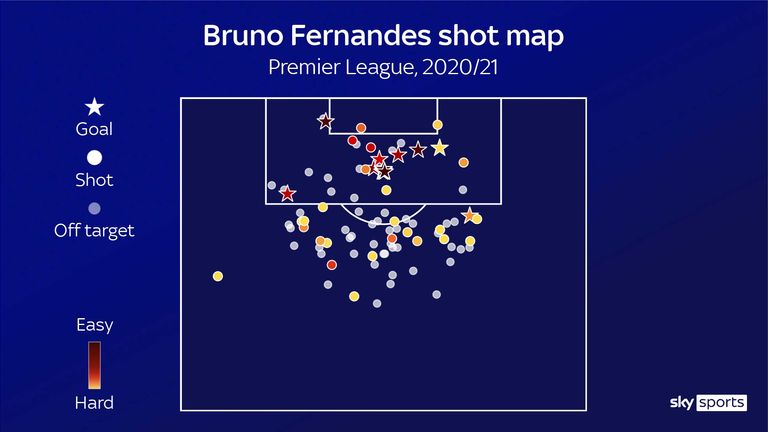 The serial Player of the Month produces a considerable number of shots from distance, but only one of those has resulted in a league goal this term, against Everton in February. His primary threat comes from around the six-yard box – and from 12 yards.

Bamford has certainly proven his critics wrong during Leeds’ scintillating return to the top flight and his goal ratio of one every two games provides ample evidence.

The underlying xG suggests he has become more clinical as the campaign has progressed and Marcelo Bielsa’s gung-ho approach could mitigate the tough fixture schedule ahead – but he would have to defy the odds. 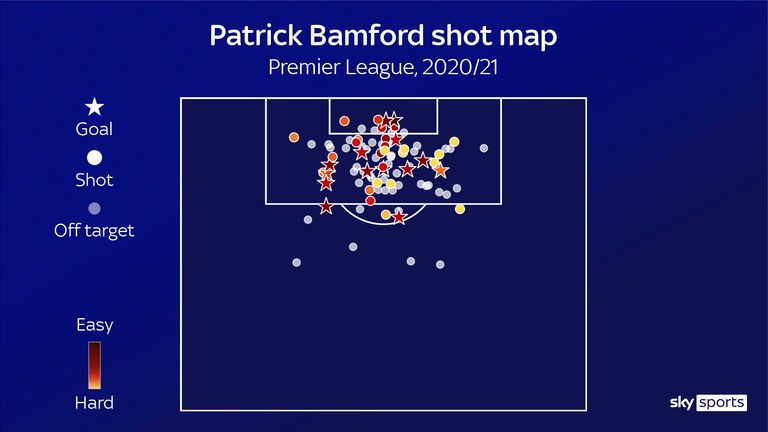 Unlike Kane, Bamford almost exclusively fires from inside the box and usually within the central confounds of the yard box – although he seems particularly adept at finishing from the left-of-centre area.

Calvert-Lewin has made only 25 league appearances this season – fewer than his fellow Golden Boot challengers – while Everton also have a game in hand, which bodes well for the England striker.

His goal ratio of 0.58 per 90 places him above Bamford and behind only Kane, Salah and Fernandes. Indeed, the 24-year-old does not take penalties for the Toffees and, therefore, his goal ratio in open play exceeds all the challengers. 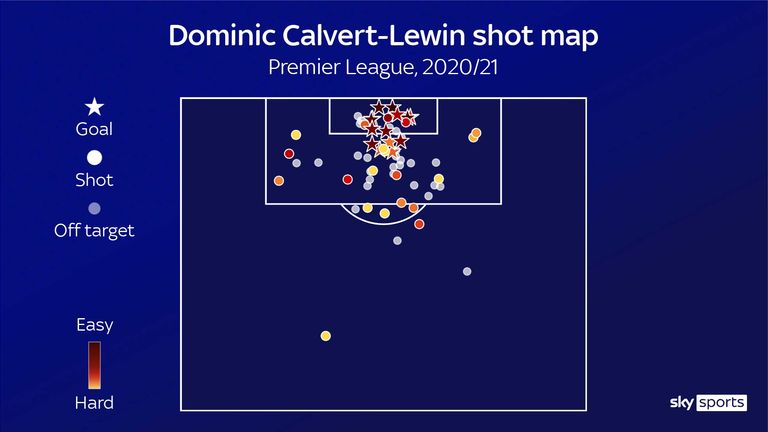 Calvert-Lewin’s shot map reveals his primary threat: winning aerials and eking out openings in and around the six-yard box. All of his 14 goals have been scored from this area, with only nine attempts from range.

Realistically, the only other outsiders include Heung-Min Son (13 goals), Jamie Vardy and Ilkay Gundogan (both 12 goals).

Vardy claimed the award last season but has only scored once in the Foxes’ past six league games and only once in his past 13 appearances, while Kelechi Iheanacho is increasingly easing the burden.

The smart money says Kane or Salah will scoop the Golden Boot, which will add further fuel to transfer speculation about where their futures lie. But, as for which of these players will grab the prize, it is too close to predict.