Jones Knows is back in the prediction chair to provide predictions and betting insights on an intriguing Premier League weekend that includes the North London derby.

I am surprised to see Brighton as favourites with Sky Bet for this one. The markets remain fascinated and obsessed with Graham Potter’s team turning their form around. They have a point in terms of their relegation chances and surely they will have too much to get involved in that scrap, but Southampton – to my eye – are well-equipped to win this game.

Ralph Hasenhuttl’s side have put impressive back-to-back performances together in the win at Sheffield United and a harsh 5-2 beating at Manchester City, where they played with great bravery and confidence for large parts but were eventually just outclassed. Plus, under Hasenhuttl, Saints are unbeaten in four games vs Brighton, winning three, including the reverse fixture 2-1 at the Amex despite Brighton having fans back inside the stadium. The Evens for Southampton Draw No Bet (meaning we get a full return if Saints win and our stake back if it’s a draw) looks best bet material for the weekend.

I am not completely trustworthy of Leicester as an attacking force at the moment without James Maddison.

To his credit, Brendan Rodgers has got his team grinding out results which has kept them firmly in control of their top four finishing destiny. Since beating Liverpool 3-1, Leicester’s attacking numbers have declined. In four games against Arsenal, Aston Villa, Burnley and Brighton, the Foxes have posted a total expected goal figure of just 3.57 – the third lowest of any Premier League team in that period. If you throw in the two games vs Slavia Prague, their average expected goal figure per game has been a worrying 0.77.

That drop-off has coincided with a lack of goals for Jamie Vardy, who only has one goal in his last 14 games. Going further back, Vardy only has five non-penalty goals in his last 22 Premier League appearances at King Power Stadium.

Sheffield United have scored just 16 Premier League goals this season – the fewest in the top four English divisions and joint-fewest in major European Leagues (with Schalke). When you throw in the shot-shy Blades into the mix for this match then under 2.5 goals at 4/5 with Sky Bet looks a worthy shout.

Thankfully for Rodgers’ team this weekend, one goal probably will be enough to land the points here. The Blades remain competitive in matches but confidence now looks back to levels of their woeful run at the start of the season. They will just want this season to be over now and to regroup.

If you like your football matches with a dollop of dirtiness – then fill your boots with this one.

Predicting an outright result in this one looks a tough ask when assessing the odds – the bookmakers have got it spot on. This has the look of a very tight affair with a moment of madness or magic likely to be where this is won or lost. My eye is drawn to the cards markets as we have all the ingredients for a very spicy encounter.

These two teams have drawn the most yellow cards off opposition players this season. Tottenham (60) and Arsenal (53) are the Premier League kings in that regard with both teams possessing a liking for attacking with pace and power.

Traditionally, this is also a fixture where cards are thrown around like confetti. When looking at fixtures with a minimum of 20 meetings, this game sits joint-third in the list of most cards produced with an average of 4.2 cards per game – only Chelsea vs Manchester United and Sunderland vs Newcastle averages higher on the dirty ratio. 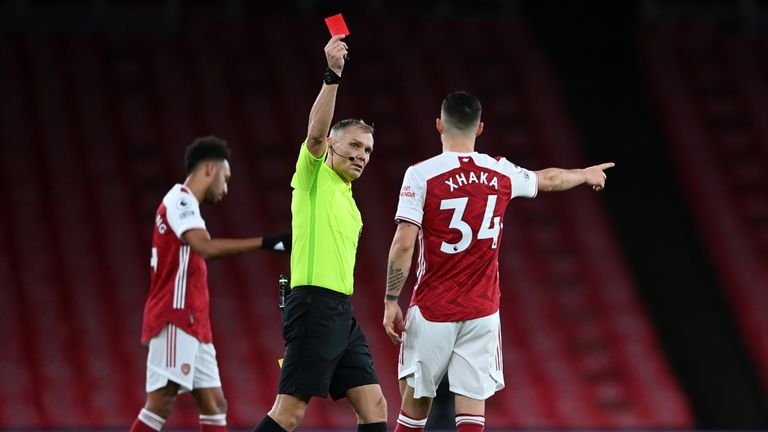 I like the look of over 50 booking points at 5/4 with Sky Bet (10 points for a yellow, 25 points for a red) – so, we are looking for five bookings with the added chance of a red card – there’s been 13 in this fixture – potentially boosting our chances. With that in mind, backing Arsenal to receive a red card at 7/2 with Sky Bet also makes appeal. No team have seen red more times in the Premier League (9) since Mikel Arteta took charge in 2019.

The home win looks a big price here. I was surprised to see Ole Gunnar Solskjaer’s team trading around 4/5 with Sky Bet.

West Ham have only lost four of their last 20 Premier League games but those did come against the elite with defeats to Liverpool, Chelsea, Manchester City and Manchester United. There seems to be an air of fear when they come up against one of the big boys with their deep defensive line likely to be opened up by a quality piece of play from a top player. United have an array of those.

The unavailability of Jesse Lingard will also be a big miss. He has knitted West Ham’s clever counter attacks together in recent weeks – the only game he has missed was the 1-0 FA Cup defeat at Old Trafford where West Ham had just three shots at goal and posted an expected goal figure of 0.11.

It’s very difficult to see West Ham scoring against a United defence that is on the improve, managing to keep out Chelsea and Manchester City over the last two weeks.

You might want to go get a household chore done in the first half of this one or take the dog out. Tune in for a bit of pre-match Jamie Carragher, of course, but do not worry about watching the first 45 minutes as the two lowest scoring first half teams in the Premier League (since 22 January) meet. Both teams have scored just one goal apiece in their nine respective fixtures in that period.

Taking it further back, Jurgen Klopp’s side have scored one first half goal in their last 13 Premier League games while Wolves have only managed one in their last nine opening 45 minutes. When you factor in the likely make-up of the game too, it has to bring the 15/8 with Sky Bet for the score to be 0-0 at the break onto your radar. Nuno’s side will be happy to sit and frustrate Liverpool by defending deep and breaking down a defensive block is proving an impossible task for Klopp’s team at the moment.

Chances will probably flow with a bit more regularity in the second half if Wolves decide to open up – but the longer the game stays 0-0, the more likely they will be happy with a point. The 10/1 for a 0-0 at full-time also is worth a look.