Manchester City and Liverpool drew 1-1 in the pick of the weekend’s Premier League matches but there were plenty of talking points elsewhere. Express Sport’s Matthew Dunn takes a look at some of the stand-out moments.

BUT for a rare Kevin De Bruyne fail – specifically from the spot – Manchester City might just have had Liverpool reeling on Sunday.

More importantly, though, they seem to have rediscovered their own focus, with Gabriel Jesus scoring in seven of his last eight Premier League games this year.

With Sergio Aguero presumably not long for this parish, City were in danger of losing their attacking thrust.

The return of Jesus from injury, though, suggests that the 23-year-old Brazilian might just be able to provide the continuity Pep Guardiola imagined when making him one of his first signings back in 2016.

That would free up some money in other areas – which judging by the way the season is going in general, might not be a bad thing. 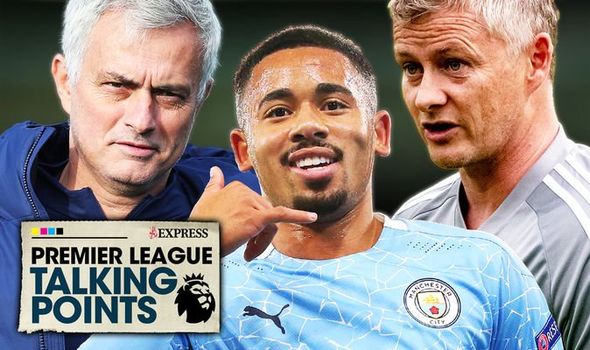 JOSE BACK IN HIS COMFORT ZONE

FOR two hours on Saturday, Jose Mourinho was back at the top of the Premier League table.

There is a lot of pressure on the Special One after Daniel Levy provided him with an unexpectedly helpful transfer window and the injury crisis he blamed for his slow start at Spurs cleared up.

And yet the Portuguese seems happy.

Despite the bust-ups he is supposed to have had with players he is not using and the Instagram pictures he is posting for the benefit of all, he seems confident in his dressing room.

That they are the sort of people who can take a challenge, much as his first Chelsea side did back in the day.

Worryingly, he is even smiling.

His next Premier League fixtures are against Manchester City, Chelsea, Arsenal, Crystal Palace, Liverpool and Leicester. Let’s see what mood he is in by Christmas.

IT’S NOT ABOUT THE TIME, OLE, IT’S ABOUT THE PLACE (IN THE TABLE)

WHEN Ole Gunnar Solskjaer burst forth with, “We were set up to fail!” the immediate sense was that he was about to come clean about his defensive plans for dealing with counter-attacks.

Instead, it was a ludicrous outburst at the broadcasters who fund his squad members’ multi-million pound lifestyles that United’s lacklustre performance against Everton could be put down to a two-and-a-half hour lack of preparation time.

For years and years, before live television, top flight teams thought nothing about playing on a Wednesday night and again on a Saturday at 3pm. That way they have an extra day’s rest before their next midweek stint.

By moving the kick-off to 12.30pm, what are the United players being robbed of? Any football autobiography tells you how much match-day drags on, so are we just talking about a little bit less Call of Duty or missing the end of Saturday Kitchen?

Certainly not worth making a big fuss over – unless you have something to hide. Or perhaps distract attention from? Like the fact that, despite a much-needed three points, you have taken the world’s biggest club to 14th in the table. 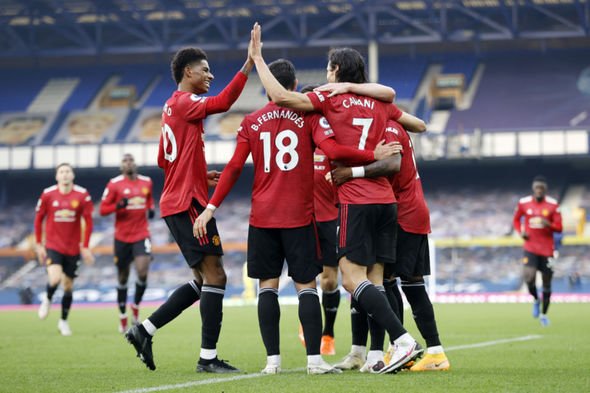 PATRICK BAMFORD being judged offside for pointing to where he wanted the ball to be played finally laid bare the evil hidden agenda for VAR.

It wants to rule out thinking altogether.

Stupidly precise definitions cut down any sort of initiative being taken from decision-making but this is going to the next level.

Bamford had no intention to score with the bottom of the suspiciously long sleeve of his imaginary tee-shirt when he pointed his arm forward, he was merely showing he had the wit to realise how a perfectly legitimate goal might be scored given he had timed his run to perfection.

But clever old VAR does not like cleverness from anybody else. So it turned being offside into a thought crime.

How long before all of Kenny Dalglish’s goals are retrospectively ruled out for offside for VAR because, as commentators liked to say about his lack of physical pace, “he had already run the first couple of yards in his head”?

The assistant who, as a human, understands this sort of thing, did not raise his flag. It is time for wider lines at Stockley Park and a margin of uncertainty known as “go with on-field decision” to be implemented as in cricket to observe the spirit as well as the letter of the laws.

LOOKMAN HAS PERMISSION TO PANENKA

FROM his manager to social media trolls, all have had a go at Ademola Lookman for his fluffed penalty attempt at the end of Fulham’s 1-0 defeat against West Ham.

Instead of rescuing an ill-deserved point he was made to look a fool.

But I applaud him – it shows the level of imagination that raises football above more prosaic sports.

Because without this kind of ghastly fail, we cannot appreciate properly the true majesty of a well-honed Panenka.

The delicate chip was named after the Czechoslovakia international who embarrassed the legendary Sepp Maier in the 1976 European Championship finals, Antonin Panenka.

But he himself admitted recently: “A lot of people asked me, what would happen if I didn´t score the penalty in the finals – I would be now a worker in factory with 40 years of experience!”

Those are the fine lines. Lookman tweeted that he “will not let one failure” hold him back and vows to put the next one in. Let’s hope he does so by chipping the ball down the middle – he deserves to have the goalkeeper dive out of the way.