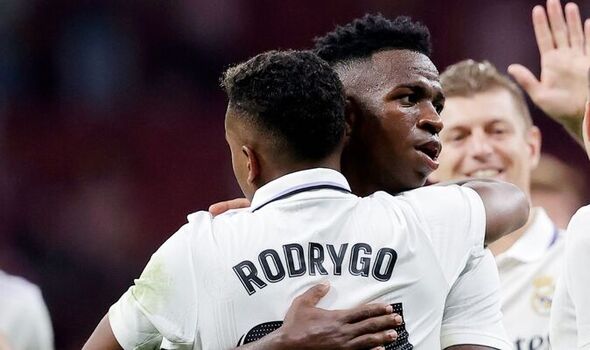 Vinicius Jr had a simple message for the critics after Real Madrid beat Atletico Madrid 2-1 in a fiercely-contested derby – tweeting: “Dance wherever you want.” The Brazilian had to block out the outside noise and maintain focus despite a difficult week that saw him subjected to sickening racist abuse.

Atletico Madrid captain Koke had advised Vinicius Jr to avoid dancing if he scored but the 22-year-old winger could barely contain his delight as team-mate Rodrygo and Federico Valverde found the target for Los Blancos.

Ahead of kick-off, Atletico Madrid supporters were captured on video singing “Vinicius, you are a monkey” outside the Wanda Metropolitano.

Even during the game, racist chants could be heard from several sections of the home crowd but Vinicius let his football do the talking.

He was involved in both Real Madrid goals as his side battled to a hard-fought 2-1 victory behind enemy lines.

It didn’t take Vinicius long to take to social media to share a simple message, posting a picture of him dancing alongside Rodrygo following his compatriot’s opener.

“Dance wherever you want,” the post read as Real Madrid made it nine wins from nine this season in all competitions to regain their place at the top of La Liga.

Atletico supporters threw objects at Vinicius and Rodrygo as they celebrated their goal by the corner flag.

Earlier in the week, Pedro Bravo, the president of the Spanish agents association, accused Vinicius of “playing the monkey” – comments that sparked widespread fury.

Bravo later retracted his comments that were made on Spanish TV programme El Chiringuito.

Tottenham forward Richarlison, who plays with Vinicius at international level, was among those to issue his support for his team-mate – alongside the likes of Neymar and Gabriel Jesus.

Richarlison told ESPN: “Boring situation, right? I even texted that guy over there who talked bulls*** to him on the show.

“But that he can have fun like he’s been doing and I’ll hope he scores a goal. 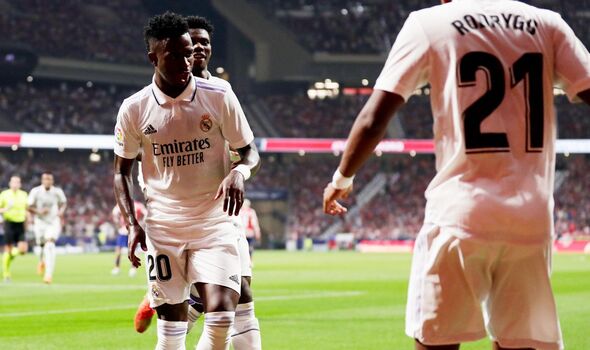 “I called him a s***… but that he can solve this as soon as possible and don’t miss it.”

Atletico Madrid substitute Mario Hermoso was at the centre of the action as he pulled a goal back for the hosts.

But he was later given his marching orders when he received two yellow cards in quick succession to dent his side’s hopes of finding an equaliser.

Real Madrid have now won all six of their La Liga matches this season and Vinicius has been one of the stars of the show. This was the perfect response to the outside noise – while Atletico Madrid are now likely to be faced with punishment.