Papers calling for fans to give him stick, Zidane deciding defence is king and those ‘overweight’ claims that just won’t go away: Why Eden Hazard is struggling at Real Madrid (and still hasn’t scored!)

Real Madrid’s defeat against Paris Saint-Germain just under two weeks ago was very bad news for everyone at the club, but no one more so than Eden Hazard.

It was enough failing to make any impact in the Parc des Princes on his big Champions League debut for Real Madrid but worse was to come.

As the spotlight shined on Zinedine Zidane and the shadow of Jose Mourinho loomed large something big changed on the French coach’s tactics board – defence became king. 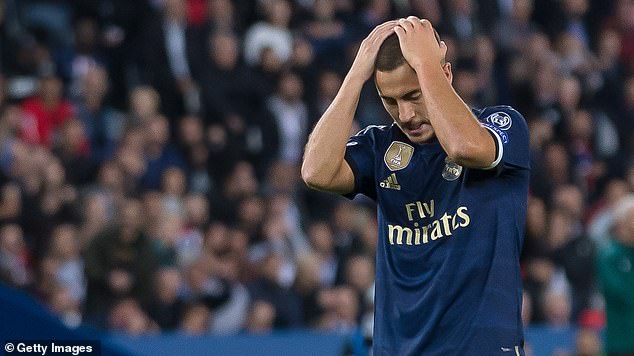 On Monday morning in Spain, and after the Madrid derby ended in a 0-0 draw that sees Zidane’s side stay top of La Liga, Diario AS even opted for a headline suggesting Real Madrid’s coach had morphed into Diego Simeone.

‘It’s not just about greater intensity it’s about greater solidity,’ said Zidane on Saturday night proud of the way his team now close the space out between the lines and drop back into something approaching a 4-5-1 when they lose the ball. They have not conceded in three games since the Paris debacle.

All this means that any dreams Hazard had of floating around Karim Benzema waiting for the clever flicks into space, all without a great deal of defensive responsibility are gone.

He is being played wide of a front three in a 4-3-3 but there are major defensive responsibilities. He had to track Kieran Trippier on Saturday in the Metropolitano and a week before that it fell to him to follow the forward forays of Jesus Navas as he attacked from full back. 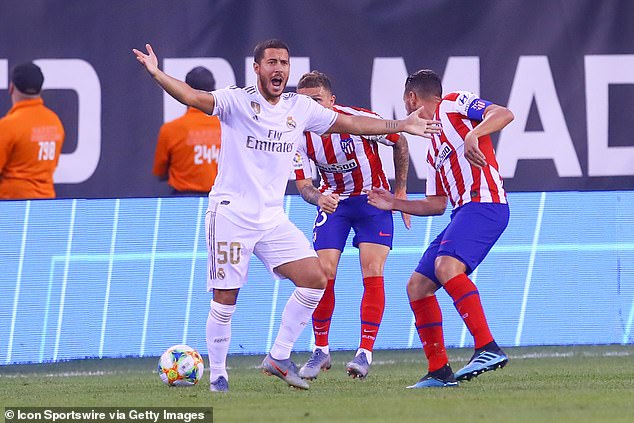 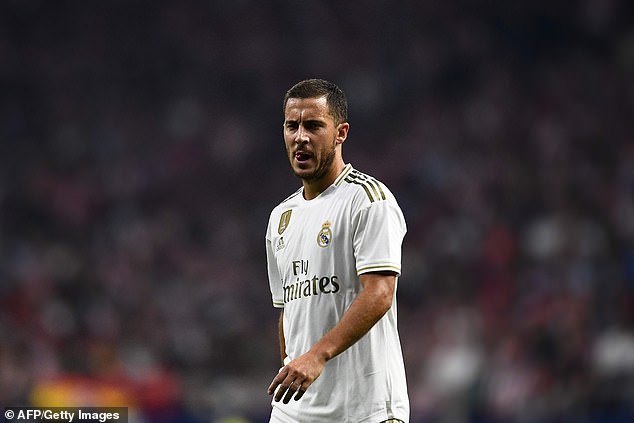 Any dreams Hazard had of floating around Karim Benzema, waiting for clever flicks, are gone 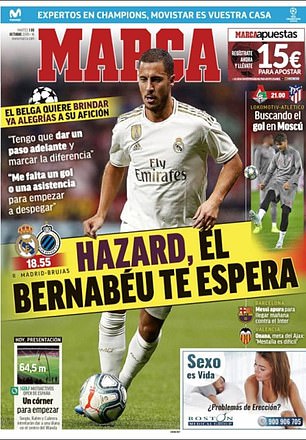 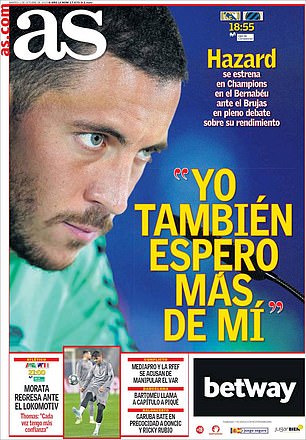 Gareth Bale seems to be coping with the new demands – defending well without losing his attacking spark. ‘He was especially good in terms of what he did for the team. He worked hard in defence and we benefited from that,’ said Zidane of Bale’s performance at the weekend.

But for Hazard, still trying to get 100 per cent fit after an injury-interrupted pre-season, it has been harder.

Hazard admitted ahead of his side’s clash with Brugge that he doesn’t feel like a Galactico yet due to his slow start to life at the Bernabeu.

‘I’m not a Galactico yet. I have to show that I can be one,’ said Hazard.

‘We all know the history of the number seven shirt at this club and I want to show I can be the best in the world. I want to give my all, not just in matches but in training too.’

In pre-season Hazard was reported to have joined training a stone overweight. Those claims have stuck with him although respected television pundit Jorge Valdano has done his best to back-track from comments he made about Hazard not having his shirt tucked in on his debut to hid his silhouette, to mentioning how in shape he now looks.

The statistics were not great at the weekend and neither were the reviews. The former Chelsea forward registered no shots, played only 31 good passes, nine bad, and lost the ball 17 times.

Marca even seem to call for supporters to get on his back more. ‘How can a kid like Vinicius gets jeered while Hazard tip-toes his way through games?’ asked one columnist.

The supporters will turn soon enough if there is not improvement, with or without encouragement to do so. ‘No trace of the Belgian, we are still waiting for him to turn up,’ added the Marca match ratings giving him no mark. 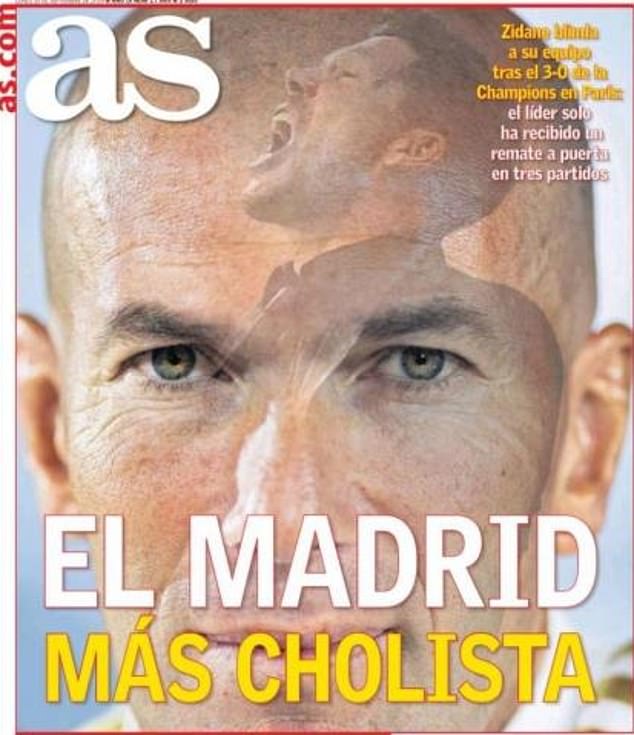 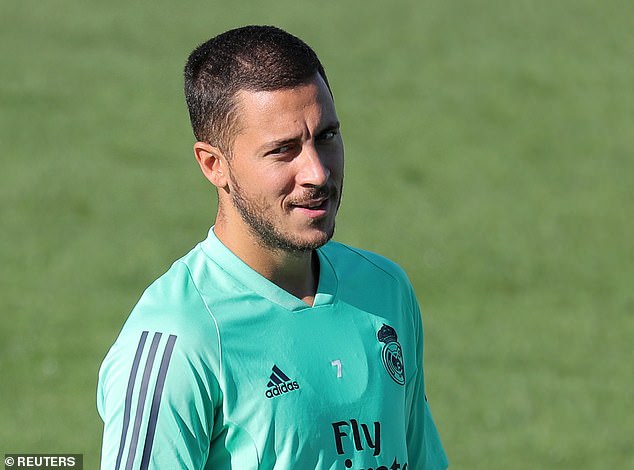 ‘When he scores we will see a liberation,’ said Zidane but it’s going to be difficult for him to get too many chances for himself in matches like Saturday’s away to Atletico Madrid and the weekend before against Sevilla.

On the bright side the shackles ought to be off when Real Madrid take on Brugge in the Santiago Bernabeu.

So far the Real Madrid supporters are staying with the club’s big summer signing. It’s been noted that at this stage of last season he had already scored seven goals for Chelsea.

But they believe the real Hazard will step forward soon enough. Brugge are not the only opponent that the Belgian might enjoy playing against. Real Madrid are home to Granada at the weekend. They are over-achieving after a stunning win over Barcelona but are a newly promoted side all the same. 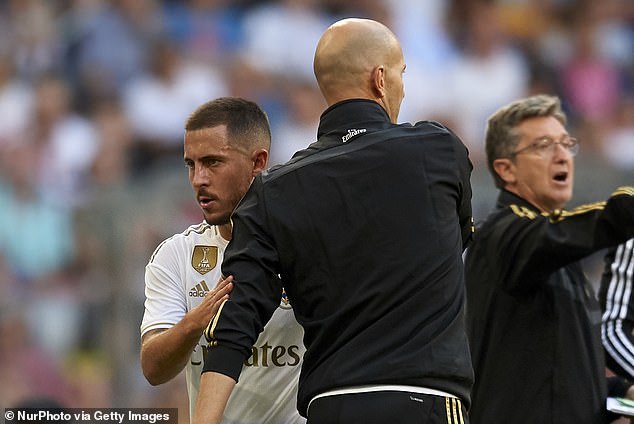 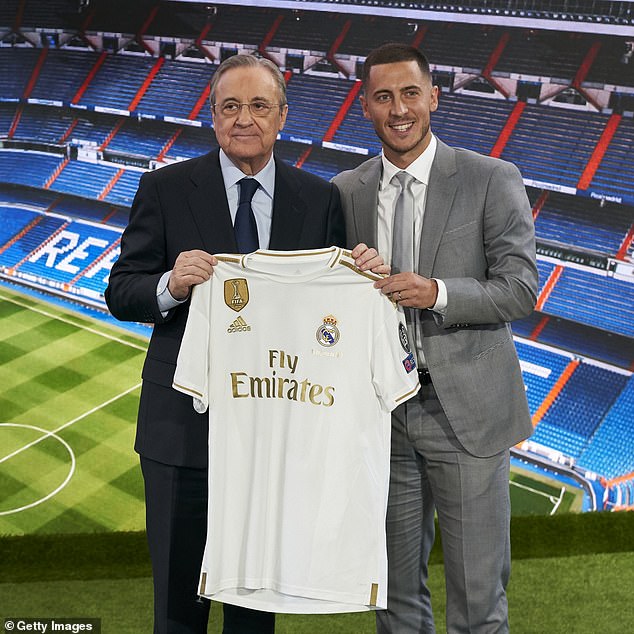 Madrid then go to another newly promoted team Mallorca whose form has been less impressive and then they face Galatasary in the Champions Leauge. These games will be used by Zidane to boost the confidence of Hazard.

Zidane knows all about arriving at Real Madrid with high expectations and then failing to meet them in the first season – it happened to him after he signed for Madrid from Juventus.

There is no better coach to guide Hazard through this difficult period. It is in his interest to do so because he was the man who insisted Real Madrid pay 100m for a player who only had one year left on his contract.

For both men it’s important that Hazard starts shining soon – preferably before his first Clasico at the end of the month when he will be asked to sit at the same table as Lionel Messi and can not afford to look out of place.