Paris is known as the city of love, but there will be no love lost between Real Madrid and Liverpool this month as they battle it out for the Champions League crown at the Stade de France.

These two teams have rightly earned their spot in this epic showpiece after claiming a stake as two of the best sides in world football. Liverpool – lead by the purring displays of Mohamed Salah – have blown teams away this season, both in the Premier League and on their travels in Europe, and could very well end the season with the quadruple in their possession.

Madrid, meanwhile, have stormed to the LaLiga title and have shown their relentless determination to overcome any challenge after being forced to battle from behind a number of times on their journey to the final – pulling off incredible fightbacks against PSG, Chelsea and Man City – with Karim Benzema leading the charge with a sensation array of goalscoring.

This meeting will be a repeat of the 2018 Champions League final, where Madrid came out on top against a Liverpool side who were just getting started under Klopp. Now, the Reds are much improved and will arguably come into this one as favourites as the two European titans go at it.

Sportsmail matches the two sides up ahead of the huge final this month, rating each team player-by-player to determine who looks the strongest 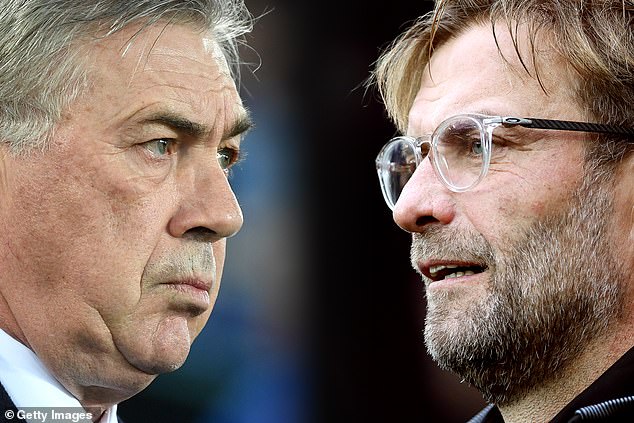 Alisson (Liverpool) – The Brazilian has gone from strength to strength in recent seasons and is imperious in between the sticks each week. The former Roma shot stopper has cut out some of the silly mistakes that crept into his game and easily counts as the best keeper in the Premier League – arguably on par with Ederson – and one of the greatest in the world too. Alisson has 20 clean sheets in 32 games this season, a stunning total, conceding just 20 and making 66 saves. 8/10.

Thibaut Courtois (Real Madrid) – The former Chelsea man didn’t have the most solid of starts to life at the Bernabeu since sealing his £35million switch from Stamford Bridge, but now he is really imposing his mark on the No 1 jersey. He has 14 clean sheets in LaLiga this season. 8/10 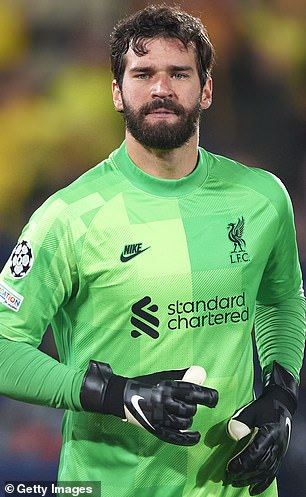 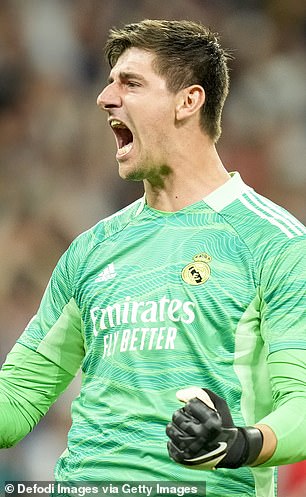 Trent Alexander-Arnold (Liverpool) – After a slightly ‘underwhelming’ season last year – by his standards – the Merseyside lad is back to his absolute best and is set to play in his third Champions League final. With 17 assists in all competitions this season, the 23-year-old offers Liverpool a vital avenue of creativity and his crosses will always cause a real headache for opposition defenders. 8/10

Dani Carvajal (Real Madrid) – There was a time when the Spanish full-back was regarded as one of the best right-backs out there, but his overall standing in the game has dropped over the years and his season has become blighted by injuries – with Covid, muscular issues and a calf problem cutting down his number of appearances early on in the campaign. In recent weeks he has put in some solid displays to help Madrid win LaLiga. 6/10. 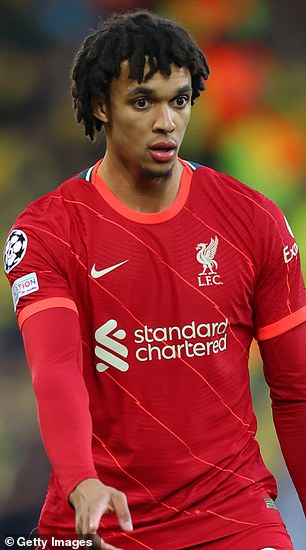 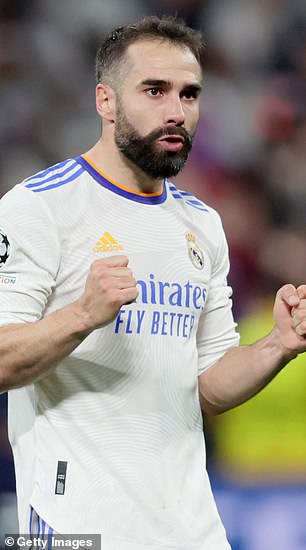 Trent Alexander-Arnold (L) has been at his creative best this season, while Dani Carvajal (R) has been important to Real Madrid’s title win

Virgil van Dijk (Liverpool) – The defensive colossus has been an integral part of Liverpool’s title charge this season after missing a large chunk of last season through injury – he has started 32 out of Liverpool 34 league games, plus eight out of ten Champions League matches. He has rightly become one of the most respected centre-backs in England and has inspired his team to 21 clean sheets when on the pitch. His leadership and organisation will be key in the final. 9/10.

Eder Militao (Real Madrid) – He has increased his amount of minutes this season after the departures of Sergio Ramos and Raphael Varane and has has been a reliable player for Ancelotti in his back four. Looked shaky in their semi-final win over Manchester City but capable of doing a job when required. 7/10 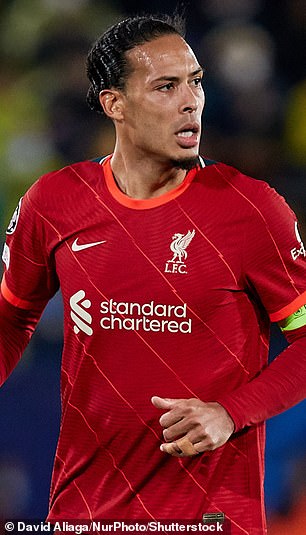 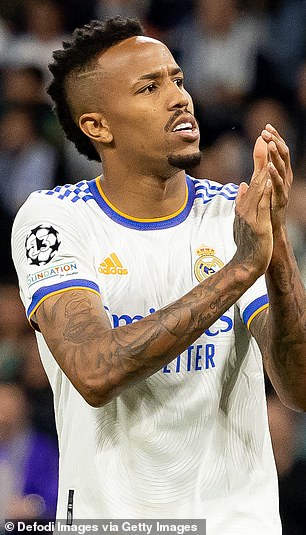 Joel Matip (Liverpool) – Jurgen Klopp has been rotating the centre-back with Ibrahima Konate between competitions in recent weeks, but it has been the Premier League where Matip has found his feet – starting 28 times this season – and after six years at Anfield, he has become one of Klopp’s most trusted stars after the German signed him in 2016-17. 7/10

David Alaba (Real Madrid) – Had to fill the void left behind by Ramos and has stepped up admirably since signing on a free transfer from Bayern Munich last summer. He has brought a wealth of experience to the Bernabeu and has made a significant contribution at centre-back to help them win LaLiga. His presence in the backline and winning mentality is vital for a club like Real Madrid. 8/10. 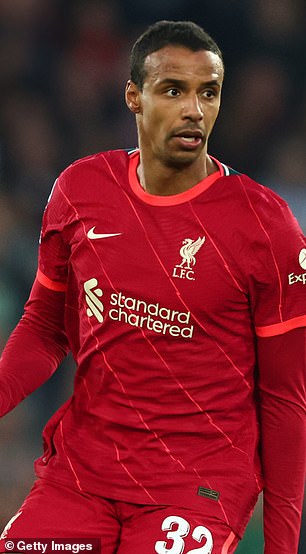 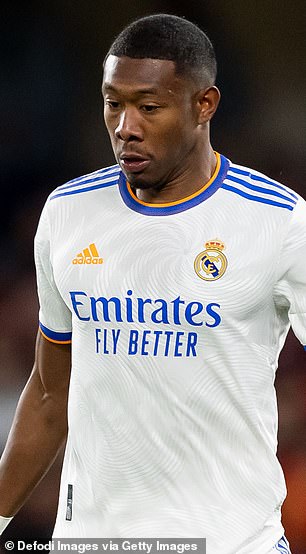 Andy Robertson (Liverpool) – His consistency levels since signing for Liverpool in 2017 have been nothing short of remarkable. What an incredible story his career has been after joining from relegated Hull City. Has combined forces with Alexander-Arnold to form a devastating wing-back pair, with both delivering a huge threat down the wing and Real Madrid should have their hands full. 8/10

Ferland Mendy (Real Madrid) – A good full back on his day but has suffered with terrible injury problems since he moved to Madrid. This season alone he has missed out on 14 games due to fitness issues, but finally looks to be pushing on and stepping up for Madrid. He’s still managed 18 starts this season and has produced his best form this month. He provided two assists in the first leg 4-3 loss to City and came up with a vital clearance off the line in the second leg. 7/10.

Andy Robertson continues his consistent form for Liverpool, and Ferland Mendy (R) is starting to put his injury woes behind him

Thiago (Liverpool) – The Spanish midfielder will be right up for the final against the rival of his boyhood team Barcelona. He’ll know many of them well from the Spanish national team, and Thiago can hurt them with his incredible passing range, vision and creativity. He’s taken time to find his feet at Liverpool but we are seeing the best of him in the latter part of this season – himself finally able to make progress after a season blighted by injuries 7/10

Luka Modric (Real Madrid) – The Croatian magician continues to dazzle us and defy his age at 36. The former Tottenham and Ballon d’Or winner shows no signs of slowing down after a sensational campaign that has seen him pick up two goals and nine assists in all competitions. He has the ability to change a game in the blink of an eye and his assist with the outside of his boot against Chelsea earned him rave reviews with pundits. 8/10 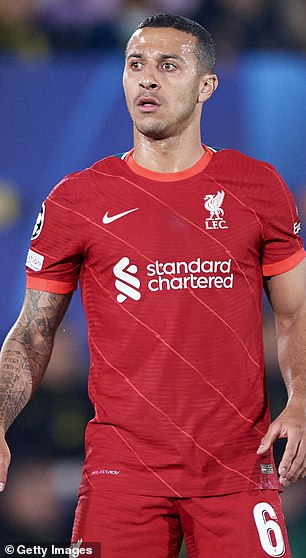 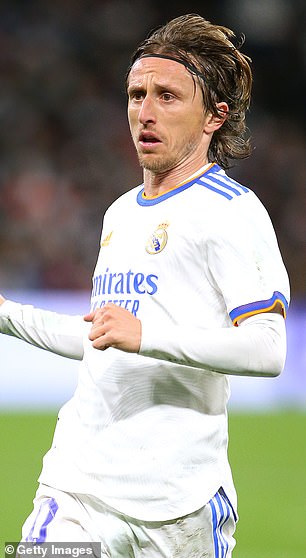 Fabinho (Liverpool) – The Brazilian midfielder appears to get better and better for the Reds, having steadily grown in influence since joining from Monaco in 2018. Nearly ever-present under Klopp this season, he is one of the most dependable names in the squad and has quietly gone about his business as one of the more unsung heroes of Liverpool’s team – winning tackles and getting the team ticking. He’s played 45 games this season – scoring eight times. 8/10

Casemiro (Real Madrid) – Another tough-tackling midfielder who cannot seem to go wrong, the Brazilian has been a devout servant to Los Blancos for the last 10 seasons and has won the lot. Casemiro has always been a first choice member of the team throughout his decade at the Bernabeu and it’s all down to his brilliant interceptions, high work rate and stamina. No wonder he’s known as ‘The Tank’ in Spain. 8/10 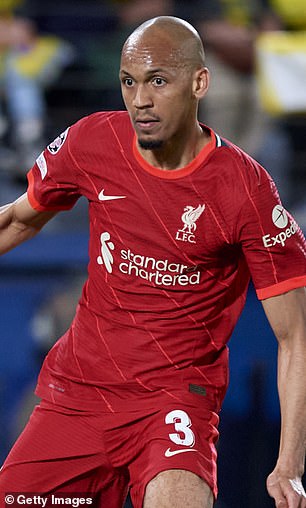 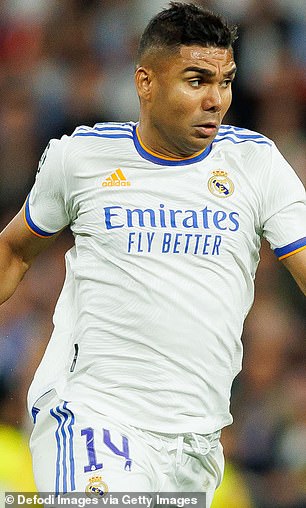 Jordan Henderson (Liverpool) – The leader in the middle of the park, Henderson has already earned iconic status at Liverpool by surpassing legendary Steven Gerrard after lifting both the Champions League and Premier League trophy. He provides calm and dogged displays in midfield, and while he might not be as technically gifted as Madrid’s top talents, he will never let you down. 7/10

Toni Kroos (Real Madrid) – Another player who has won the lot, having a player of Kroos’ quality can never be a bad thing, even though he is not enjoying his most outstanding season with Madrid. He has three goals and three assists this season but with the technical prowess he possess he can – alongside Modric – provide something out of nothing to bail the team out. 8/10 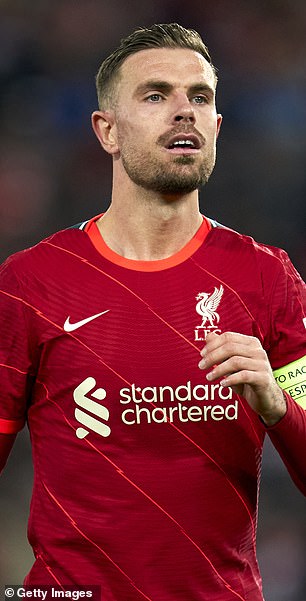 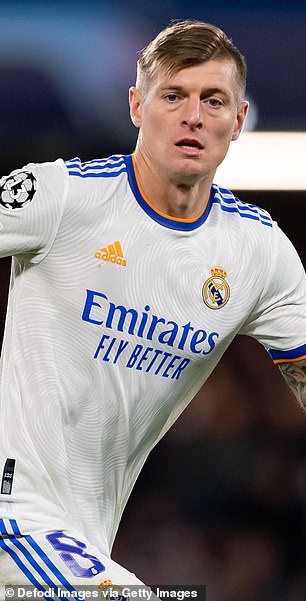 Jordan Henderson is the reliable leadership figure at Liverpool, while Toni Kroos (R) provides technique and vision in midfield

Mohamed Salah (Liverpool) – He might have scored just three goals in 15 games, but the Egyptian is still enjoying one of his best ever seasons in a Reds shirt and has been integral to their chances of winning the Quadruple. He is on course to finish the season as the top goalscorer and top assister in the league after picking up 22 goals and 13 assists. He has already won the FWA player of the season award and is in line to collect the PFA gong too. Salah doesn’t have the best record in big finals but as long as he is on the pitch Liverpool have a chance of success. 9/10

Rodrygo (Real Madrid) – The man who got Madrid to the Champions League final. The Brazilian has not exactly been first choice under Carlo Ancelotti this season – starting just 13 games in LaLiga and making 16 appearances off the bench, but he has still chipped in with eight goals in all competitions – and the last two he netted might be the most important in his career. Deserves to start the final after getting rescuing them from the jaws of defeat. 6/10 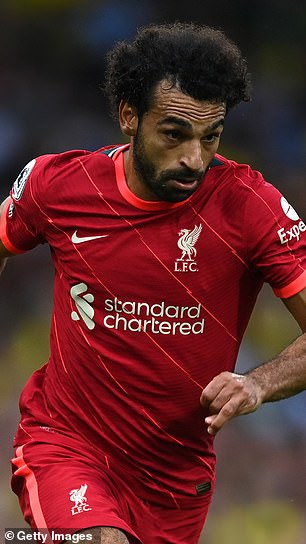 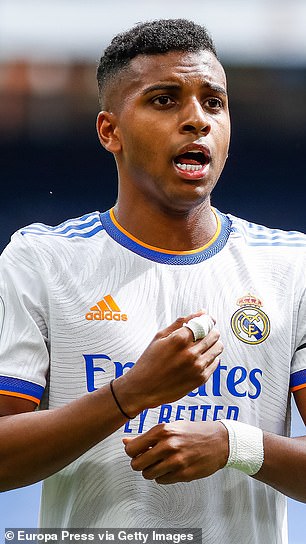 Sadio Mane (Liverpool) – No longer in Mo Salah’s shadow after beating his Egypt side with Senegal in the Africa Cup of Nations final, Mane knows how it feels to win with both club and country and that will be crucial when he steps out at the Stade de France with Liverpool this month. His 19 goals in all competitions have boosted the club’s charge for multiple honours and his threat alongside Salah will certainly be a huge threat to Madrid. 8/10

Karim Benzema (Real Madrid) – You start to run out of superlatives for the Frenchman. His incredible season has seen him net three hat-tricks, giving him a total of 43 strikes in 43 games. He has been the beating heart of Real Madrid’s Champions League campaign, with 15 goals in 11 games – pulling the team through matches on a number of occasions. 9/10 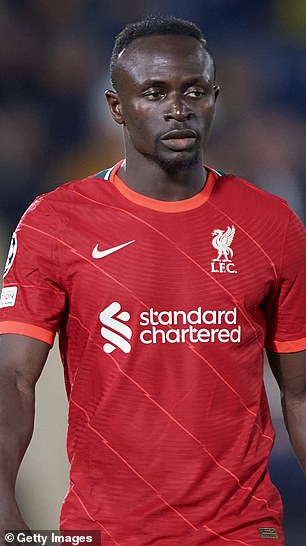 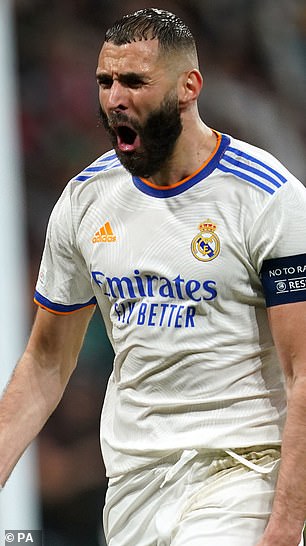 Luis Diaz (Liverpool) – Fans and pundits alike have been singing the Colombian’s praises since joining from FC Porto in January, and his workmanlike displays up front have quickly pulled him into the thinking of Klopp – who has plenty of dilemmas up front with so much competition. But his brilliant hold up play has earned him a regular starting spot even when he isn’t on the scoresheet – though he has contributed with five goals and three assists thus far. 7/10

Vinicius Jr (Real Madrid) – It looks like we are finally seeing the best version of a Brazilian star so hyped up when he signed for Madrid in 2018. His goal output and final product has often been lacking in the years since, but this season he has come alive to show his true quality – with 17 goals and 15 assists overall. 8/10 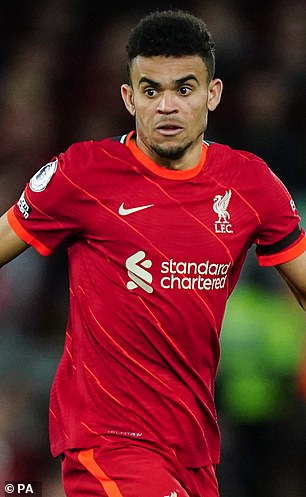 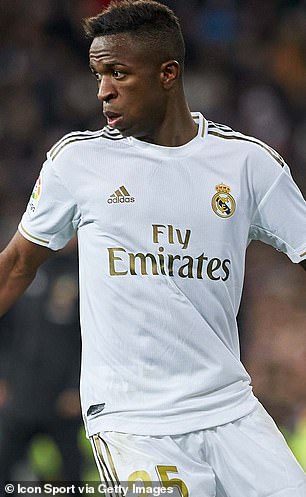 Luis Diaz has been impressive since joining Liverpool in January, while Vinicius Jr (R) is finally showing his true quality at the Bernabeu