In the latest edition of Ref Watch, former Premier League referee Dermot Gallagher assesses the key incidents from the weekend’s games, including a contentious moment in the Merseyside derby and an incident at Craven Cottage that left Graeme Souness fuming.

INCIDENT: Everton are awarded a late penalty when Liverpool’s Trent Alexander-Arnold is adjudged to have fouled Dominic Calvert-Lewin. Gylfi Sigurdsson converts the spot-kick to seal a historic Merseyside derby victory for the visitors.

DERMOT’S VERDICT: I thought it was a penalty. I think Trent Alexander-Arnold impedes him; he hooks his leg up as well. Calvert-Lewin is past Alisson – Nat Phillips is a red herring because he’s behind Alexander-Arnold when the tackle is made. Once Chris Kavanagh gives the penalty, he has to send him off but because of the process of him going across [to the pitchside monitor] and VAR feeling there was a doubt about the penalty, I think it got lost in the process about the sanction to follow. Penalty and red card? Yes. They focused on the penalty, rather than: ‘Is it a penalty and should a sanction follow?’

DERMOT’S VERDICT: This was the most-talked incident of the weekend. When I saw it, I thought the goalkeeper got the ball first – he then catches Bogle. He does get a lot of the ball and I think that’s why it’s difficult to give the penalty. He’s trying to block the ball as a goalkeeper, not trying to win it. The on-field decision was no penalty; you look at that as a VAR, you see he gets so much of the ball, I don’t think he can reverse that.

Asked about John Lundstram’s dismissal at Brighton for a tackle in which he initially got the ball, Dermot added: “You have to take each case on its own merit. Lundstram was tackling for the ball and had come a long way. Areola doesn’t make a tackle – he makes a block. I think there’s so much of the ball, if they gave a penalty, we’d be having the opposite argument.

DERMOT’S VERDICT: I think this is what we call a ‘modern-day penalty’. From what we’ve seen in the Premier League this season, they’ve decided if there’s contact on the foot, they’ll give a penalty. That’s why, 25 rounds in, we’ve already had more penalties than any other season before. We talk about consistency – they have been consistent.

INCIDENT: Harry Maguire sends Jamaal Lascelles tumbling in the box just three minutes into the game. No action is taken.

DERMOT’S VERDICT: I think nothing [should happen]. The defender is blocking off. I think the referee is focused on the goalkeeper but the VAR checked that incident in play and felt the same, that Maguire was blocking off Lascelles as defenders do in the penalty area. I think ‘play on’ was the right decision. 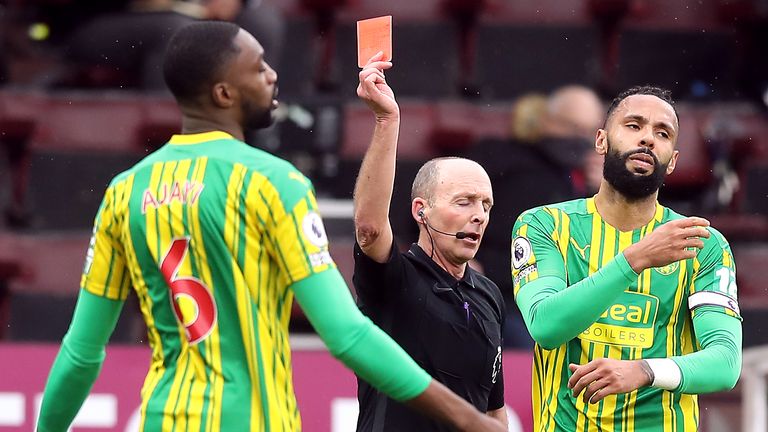 INCIDENT: West Brom’s Semi Ajayi is sent off in the first half for a handball adjudged to have denied a clear goalscoring opportunity.

DERMOT’S VERDICT: I think Ajayi knew he was beaten; once the ball goes past him, Vydra’s away. He flicks his hand out, takes a chance. Mike Dean’s view was completely blocked by Vydra and Michael Oliver, the VAR, checked that in-play. As soon as the ball went out for a throw-in, Mike Dean was referred to the screen. He went across, saw the handball and gave the red card correctly. 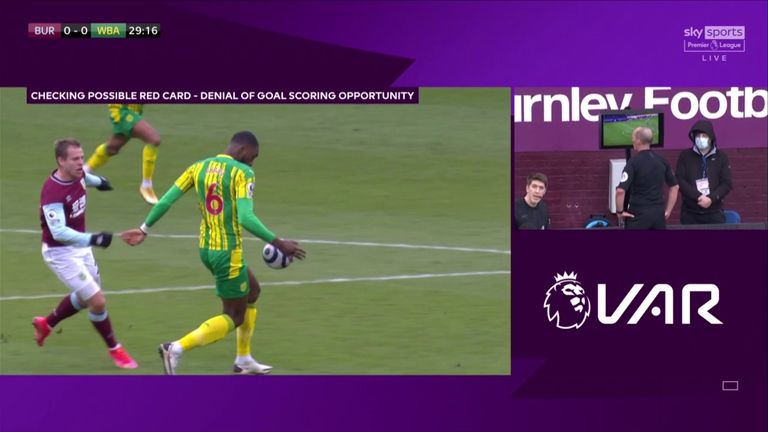 DERMOT’S VERDICT: I think this was an error of judgement. I think they’ve looked at it too analytically. I think it’s a penalty and there are a few good clues. When the ball bounces in front of Josh Brownhill and Bartley, Bartley’s arms are by his side. He puts his arms out, it bounces up and strikes him. I think it’s like the Matty Cash one a few weeks ago. If you have your arms that wide, you run the risk.

It was fantastic to have Mike Dean back. This is a guy who has refereed more than 500 Premier League games and those are games at the top of the Premier League. It shows his longevity and he makes so few mistakes. That’s why when he makes a mistake, it gets talked about because it’s not commonplace.