Richard Keys has fanned the flames of his vendetta against Mikel Arteta, this time labelling the Arsenal boss an ’embarrassment’ and ‘totally out of control’ for his touchline antics.

It comes just two months after the former Sky Sports presenter desperately called upon the FA to ‘do something’ about Arteta’s behaviour.

Arteta was incensed by his side not being awarded two ‘scandalous’ penalties during their 0-0 draw with Newcastle. 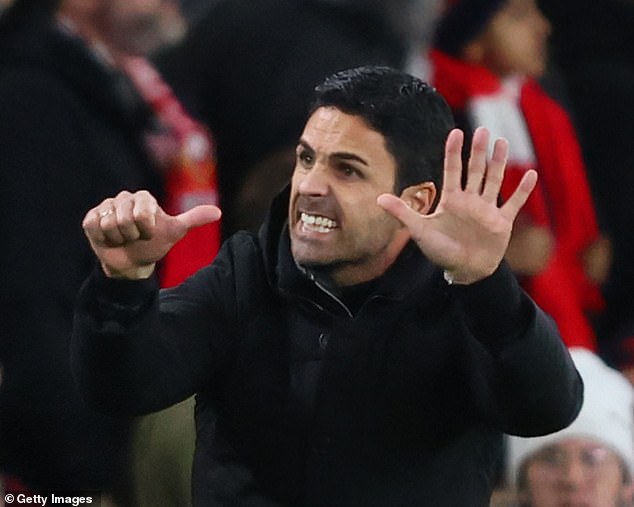 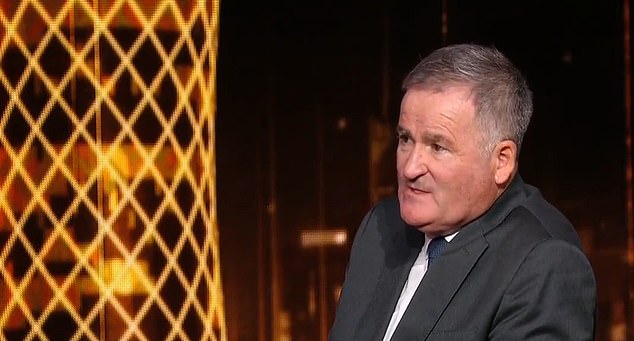 Richard Keys has fanned the flames of his vendetta against Mikel Arteta, this time labelling the Arsenal boss an ’embarrassment’

The second penalty shout – when Granit Xhaka’s late cross struck Jacob Murphy’s arm – caused a row with his counterpart Eddie Howe who was not happy when Arteta went ballistic on the touchline.

Keys, who is no stranger to having a pop at Arteta, tweeted: ‘Seriously – when is someone going to get control of Mikel Arteta? He’s an embarrassment. Totally out of control during games.’

The beIN sports presenter took to social media to vent his frustration back in November too after Arsenal’s 1-0 win against Chelsea.,

Calling on the Premier League to ‘do something’ about the situation, Keys posted a picture of Arteta outside his technical area and noted that Chelsea boss Graham Potter was following the rules by staying in his box.

Keys wrote: ‘Why is this allowed every week @FAPGMOL? Arteta has been jumping up & down all game – way outside his technical area. Potter is in his & 4th is watching. Do something about this man.’

Fans were quick to mock Keys about his ‘weird’ focus on Arteta while others accused the 65-year-old of allowing Arteta to ‘live rent free’ in Keys’ head.

In fact, after the game, Keys said on his website: ‘Someone please have a word with Mikel Arteta. Right now he’s the most irritating coach of the lot. Sit down man – and if you can’t do that – stay in your own technical area.

‘I say this because someone is going to get hurt soon as a result of his antics. There are good reasons coaches are asked to stay in their technical areas – safety is one issue.’

But, of course, this wasn’t even the first time that Keys had taken issue with Arteta.

In September, during Arsenal’s encounter with Manchester United at Old Trafford, he said: ‘Why is Arteta allowed to spend the game on the touchline? Again today – in front of the 4th official as well. Does he has special dispensation?’

Meanwhile, back in April he said: ‘And why is this irritating man allowed to spend 90 minutes outside of his technical area? Can’t the fourth (official) see this?’.

Keys has also previously accused Arteta and his team of over-celebrating following a 2-1 win at home to Fulham in August.

Speaking on beIN Sports, Keys said: ‘I understand Arsenal’s fans celebrating in the manner that they did. I felt that the coach and his players over-celebrated a 2-1 win against Fulham.

‘I think this sort of reaction to what happened yesterday from Arteta and co tells me how far they’ve fallen.

‘Arsene Wenger would have been howled out of the arena if his team had scraped a 2-1 win with in effect an own goal that was well off-target until it took a deflection, and a present from Bernd Leno.’

Perhaps it all stems from the fact that Keys did not even think Arteta should have landed the job at the Emirates. Last year, he was adamant that the Gunners should have gone with Carlo Ancelotti ahead of Arteta.

But with the Gunners now eight points clear at the top, Keys might have to admit Arteta is doing a decent job – but it doesn’t look like he will be dropping his vendetta anytime soon.