Everton forward Richarlison opens up on his rowdy past, facing Manchester United and learning English from Match of the Day

Besides taking English lessons three times a week, Everton’s young Brazilian star Richarlison has an additional way of brushing up on his practical language skills.

‘When it comes to understanding how to talk in English about football, I always watch Match of the Day,’ he explains.

‘I go home after games to watch the programme live with my mates, listen to the commentary and the experts. I’m able to understand it. I also try to watch Netflix and other English films to help me improve. 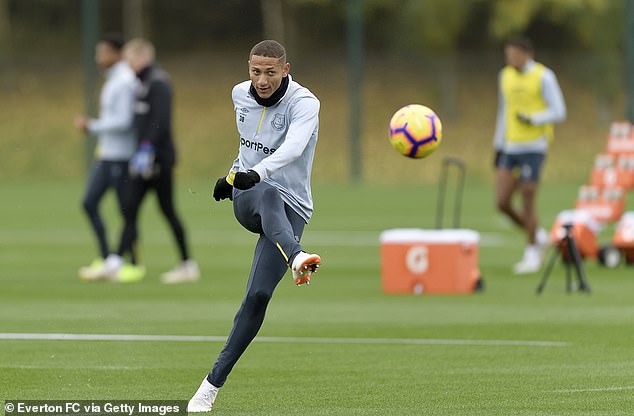 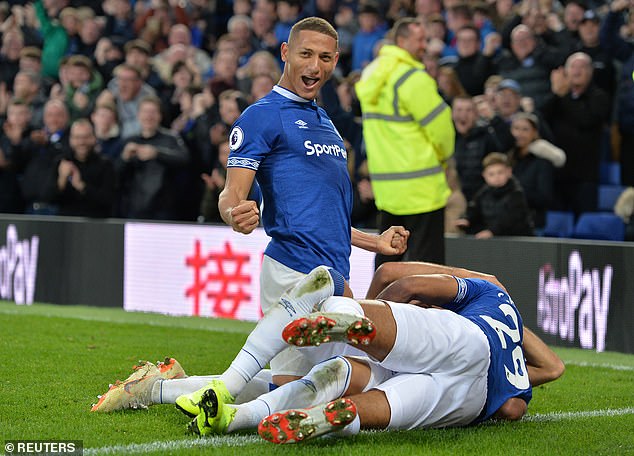 ‘At the club, I try to speak English to everyone, even though the manager and some players speak Portuguese. Usually I can get across to people what I am trying to say, but there are times when it is easier to speak Portuguese or even Spanish.’

While viewing Match of the Day and MOTD2 has recently been a pleasurable experience – Everton have won their last three games – Richarlison doesn’t pick and choose when to switch on Gary Lineker according to results.

‘I still watched it after I got sent off against Bournemouth (he pressed his forehead into Adam Smith). Of course I did. I need to see these things to be able to learn and see what mistakes I made. Use it as a lesson really.

‘I remember seeing Manchester United’s game against Burnley. Marcus Rashford was sent off for a similar incident. He’ll learn from it, we all do. Everyone makes mistakes.’

The mention of Rashford is interesting. Everton are at Old Trafford on Sunday and comparisons between 21-year-old Richarlison and his fellow prodigy are sure to be made. 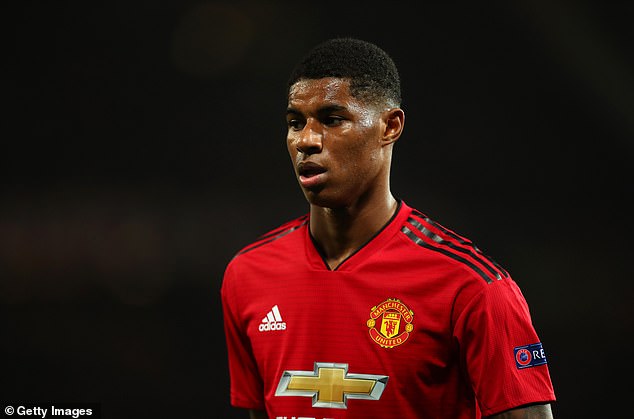 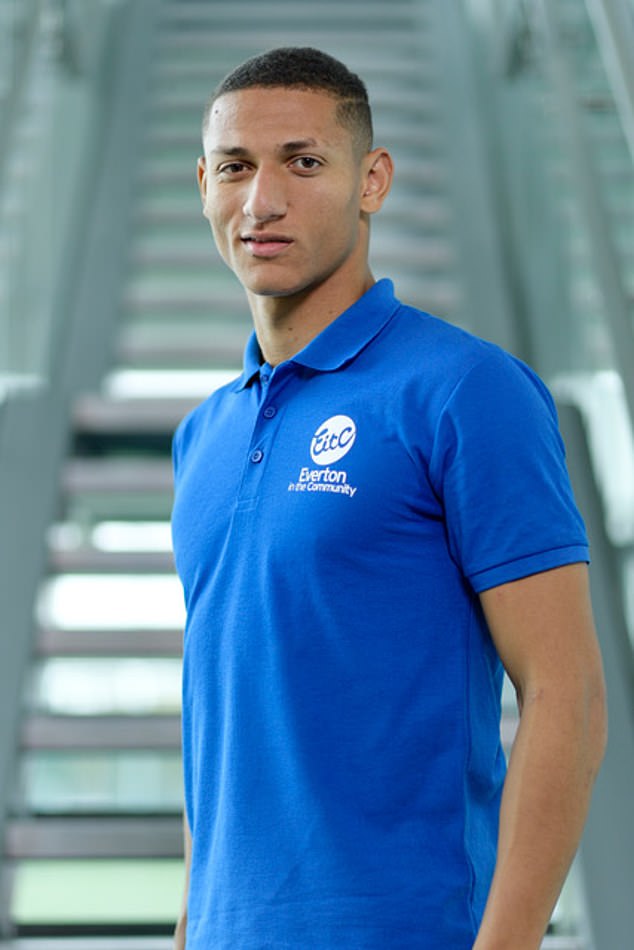 Both forwards were born just a few months apart on opposite sides of the world and have scored for club and country this season.

Richarlison watched with interest United’s defeat against Juventus in the Champions League on Tuesday night but is reluctant to join in the widespread criticism aimed at Jose Mourinho’s team afterwards.

‘I needed to watch the game as we are playing them next. They weren’t as good against Juventus as they can be but I still saw their quality. They are a great team who are capable of playing well against anyone,’ he says.

‘Juventus were better on the night but we know United still have the potential to play really well and win against us because they’ve got great players. We know it will be a hard game and we’re prepared for what’s to come.’

Richarlison’s face betrays little emotion but he answers each question considerately via a translator. 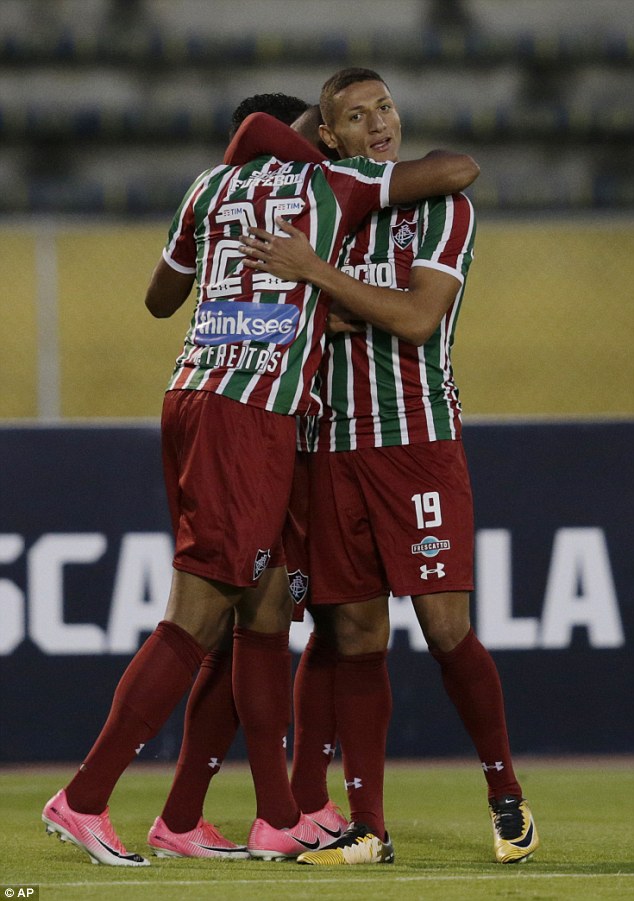 His upbringing in a Brazilian favela was harsh – he has spoken before about having a gun pointed at his head – but football has proved an escape, as it’s also been for childhood pal Daniel dos Anjos, who is at Benfica.

‘English football is really suited to me. I want to stay for many years,’ he says earnestly.

‘There’s no doubt God gave me a gift and I’ve taken advantage of it. Through hard work I’m in a position where I’m playing in the Premier League, the best in the world, and the Brazilian national team. I enjoy what England has to offer. The dream has come true.

‘When I was a kid, I’d mess around on the streets with my friends, winding people up and making them angry to the point where someone called the cops and we’d have to run away.

‘I’ve learned from the experience, what is best for me and I would say I have grown up. I have certainly calmed down a lot.

‘Here, I am a quiet guy. I live in a big house with a pool which is good fun. I like video games, so I spend a lot of relaxation time doing that.’ 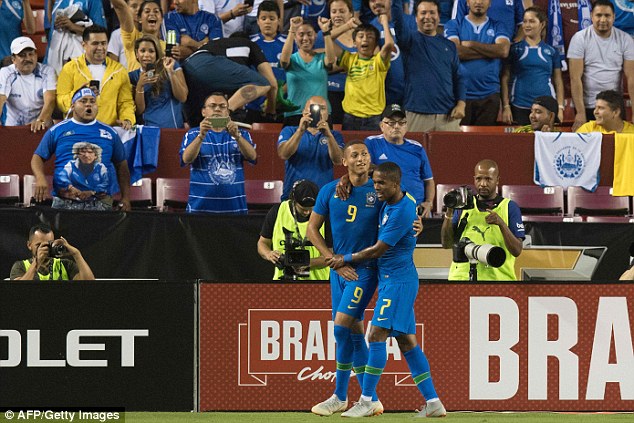 Richarlison’s debut season in England at Vicarage Road was boom-bust. Boom when Silva was in charge, five goals in 12 games from the left wing, bust after the Portuguese manager was sacked in January – Richarlison failed to score again for The Hornets.

Silva called for him again last summer after getting the Everton job and Richarlison has justified the £40million price tag, using his powerful physique and technical ability to good effect both on the left-flank and as a No9. He diplomatically says he doesn’t mind where he’s picked.

The Brazilian national team have taken note and Richarlison has won his first four caps for the Seleção this season. ‘It’s great to play alongside people like Douglas Costa, Neymar, Gabriel Jesus, Firmino, Coutinho,’ he says. ‘Brazil play Uruguay at The Emirates next month – I hope to be in the squad again.’

The rough diamond from Nova Venecia, four hundred miles north of Rio de Janeiro, endeared himself to Evertonians by giving a tearful young fan his shirt following his home debut.

Player and Goodison faithful appear kindred spirits. ‘Not every club is like this,’ he says. ‘The fans have come up with a song for me. When I hear it on the pitch, I’ll look around and see them welcoming me. It’s an amazing feeling.’

PETE JENSON: Neville was RIGHT lack of goals would be Spain's downfall