Chickens vs Pigs, Millionaires vs Masses, River Plate vs Boca Juniors… Argentina’s famous Superclasico is about to reach a whole new level as rivals prepare to meet in Copa Libertadores final for the first time

It is the rivalry so intense that the word ‘Clasico’ just doesn’t do it justice. Boca Juniors versus River Plate is a step above all that – it is the ‘Superclasico’.

No local derby in world football stirs the blood quite like this one, except perhaps Rangers v Celtic in Glasgow. The fault lines between Boca and River not only divide the city of Buenos Aires but the whole of Argentina.

The nation’s two most successful teams command more than 70 per cent of Argentine football fans between them so it’s no exaggeration to say that when they meet, an entire country comes to a standstill. 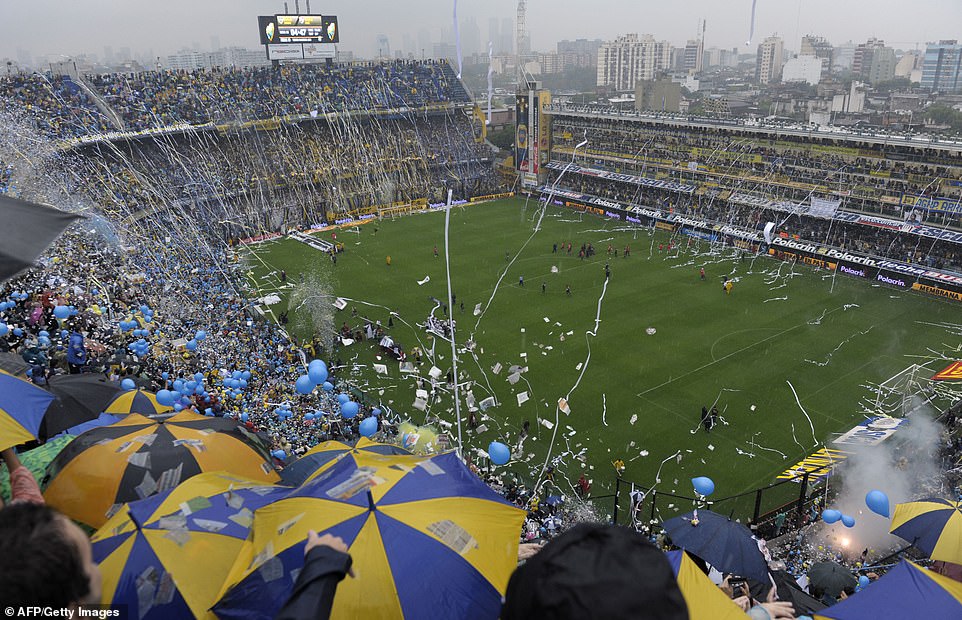 La Bombonera, the home of Boca Juniors, ahead of kick-off in a Superclasico match with their bitter city rivals River Plate 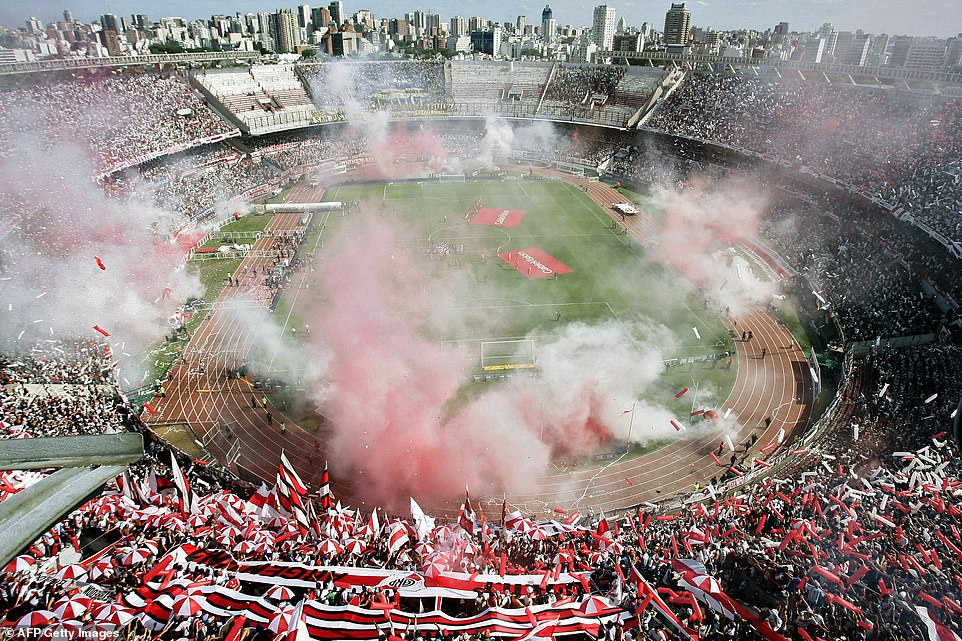 An equally stirring sight of El Monumental stadium, home of River Plate, as they take on Boca in the Superclasico 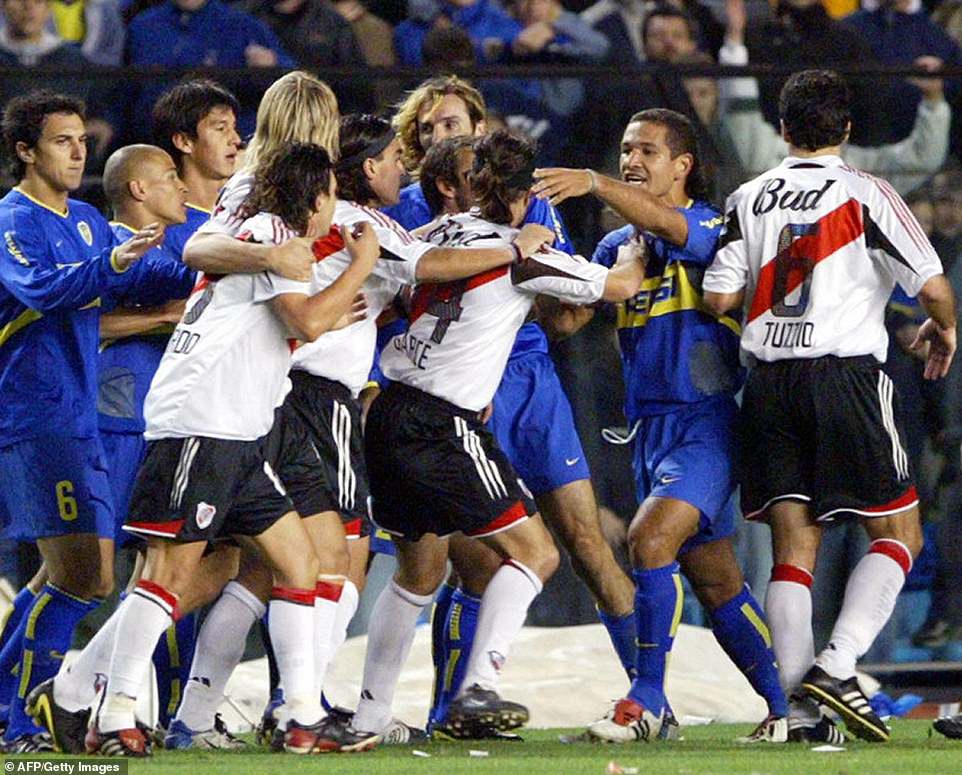 Yet in 105 years of battling one another, there has never been a Superclasico on this magnitude.

For the first time, Boca and River will contest the final of the Copa Libertadores, the South American equivalent of the Champions League. This is a whole new experience and you can almost feel the tremors already.

On Tuesday night, River Plate won 2-1 away to Brazilian club Gremio, overturning a 1-0 home loss in the first leg to advance to the final on away goals.

Boca didn’t let us down on Wednesday night. Already two goals ahead from the home leg against Palmeiras, a 2-2 draw in Sao Paulo steered them into a final that has been a long time coming.

Boca and River have met some 24 times in the Libertadores before, including semi-finals in 1978 and 2004, but never with the trophy at stake. 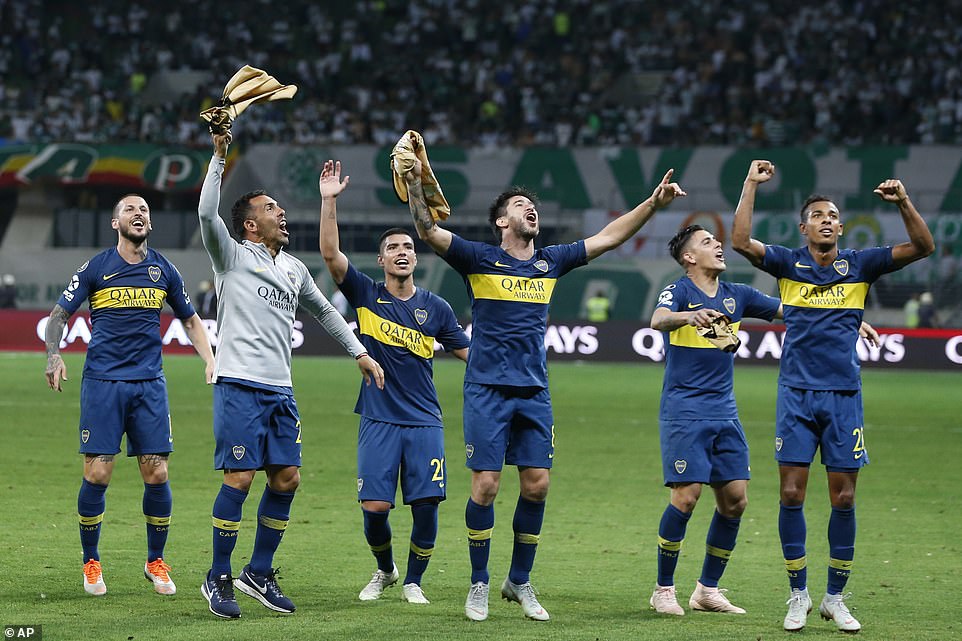 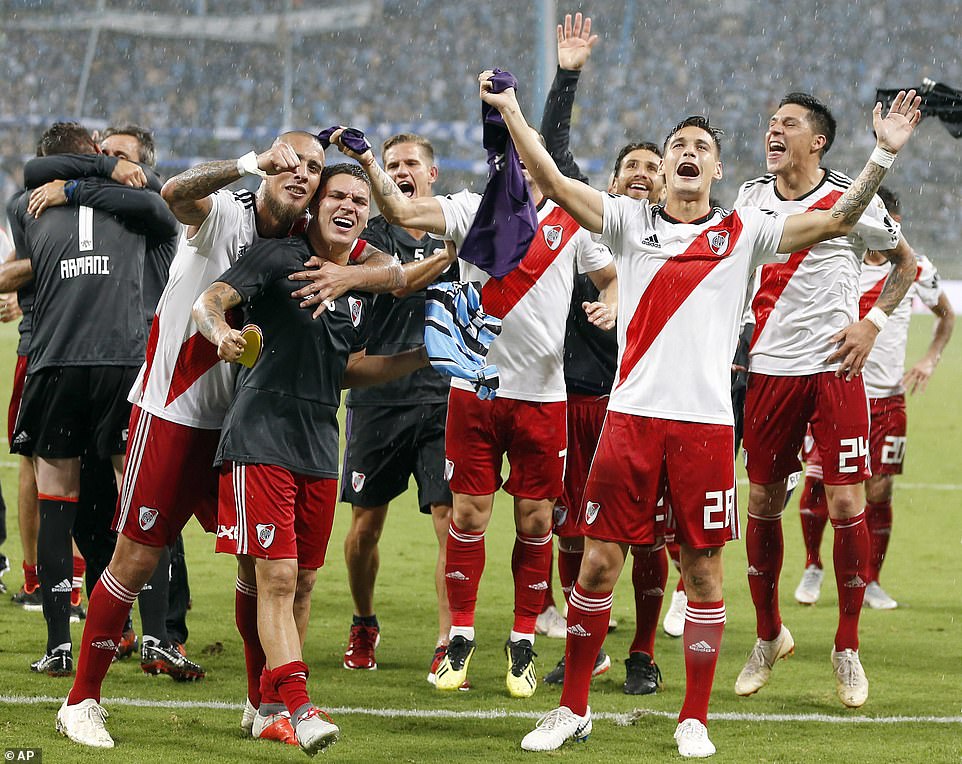 24 hours earlier on Tuesday, River Plate fulfilled their side of the bargain by winning 2-1 away to Brazilian side Gremio 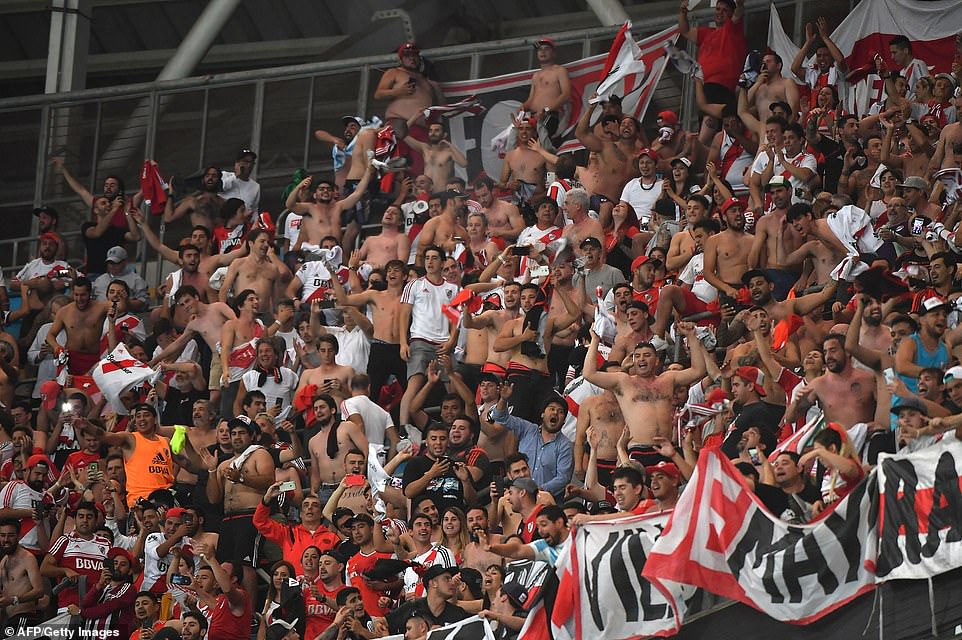 Delighted River Plate fans, who had travelled to Porto Alegre, Brazil for the second leg of the Gremio tie, celebrate their win

The first leg will be played at Boca’s Bombonera on November 7, with the return at River’s Monumental on November 28. The anticipation has already begun.

It is fitting that this is the final in the last Libertadores to feature a two-legged conclusion. Next year, the final will be held as one match in Santiago, Chile, which would have diluted things significantly.

Like so many rivalries in world football, the Superclasico is based on geography and social class.

But while the rivalry is often characterised as being between the people (Boca) and the bourgeoisie (River), both clubs actually diverged from the very same place.

Both origins can be traced to La Boca, the working-class dockland area of Buenos Aires, where Club Atletico River Plate was formed in 1901 and Club Atletico Boca Juniors in 1905.

River came about through the merger of two existing clubs, the name being the English word for Rio de la Plata, the enormous estuary that divides Argentina and Uruguay. 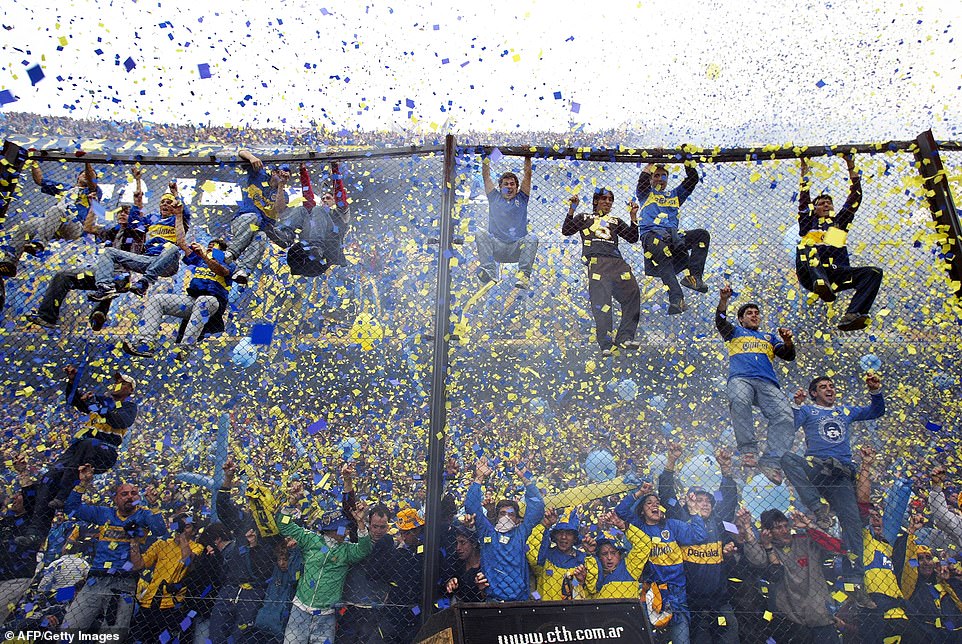 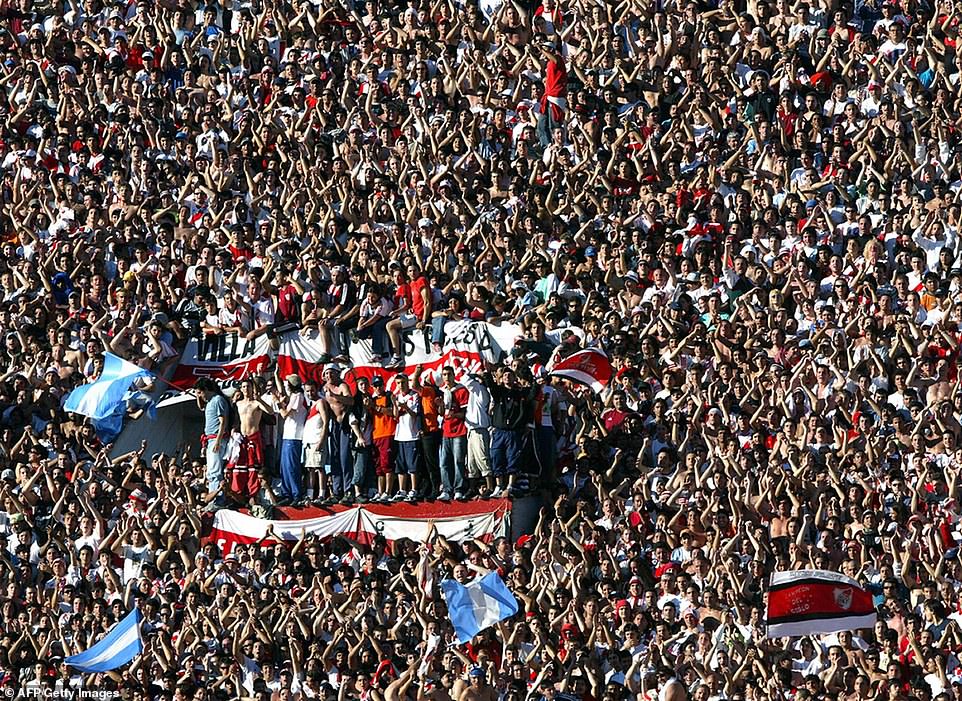 Boca was formed by a group of Italian immigrants and they adopted their blue and yellow colours from the Swedish flag on a vessel that happened to sail by on the morning they decided on their colours.

But it only really intensified in the 1920s when River relocated from the docklands to the affluent neighbourhoods of Recoleta and then Belgrano in the north of the city.

Soon they were the wealthiest club in Argentina, their expenditure on players following the advent of professionalism in 1931 earning them the nickname ‘Los Millonarios’ (The Millionaires).

At a match in 2012, cheeky River fans floated a giant inflatable pig wearing a Boca shirt above the away section at the Monumental. 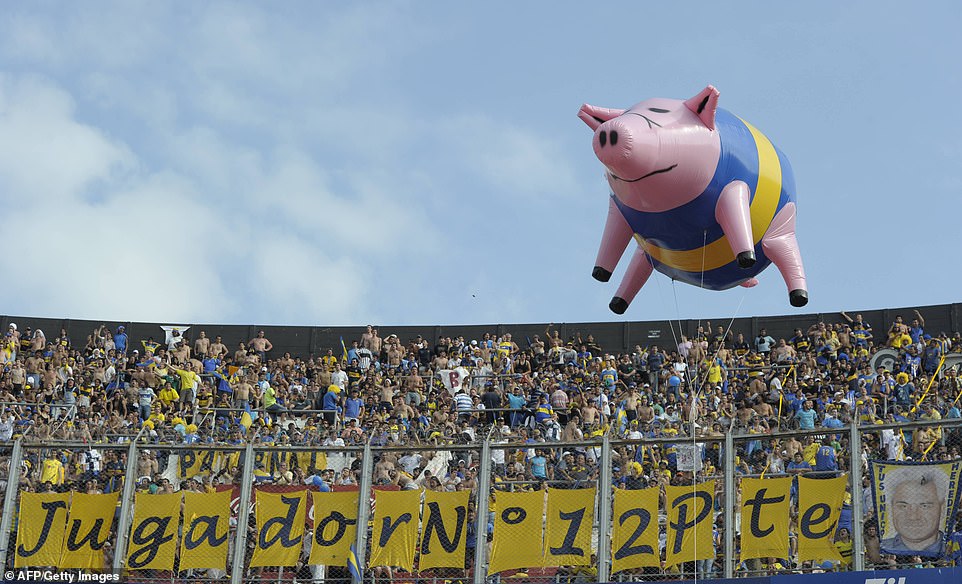 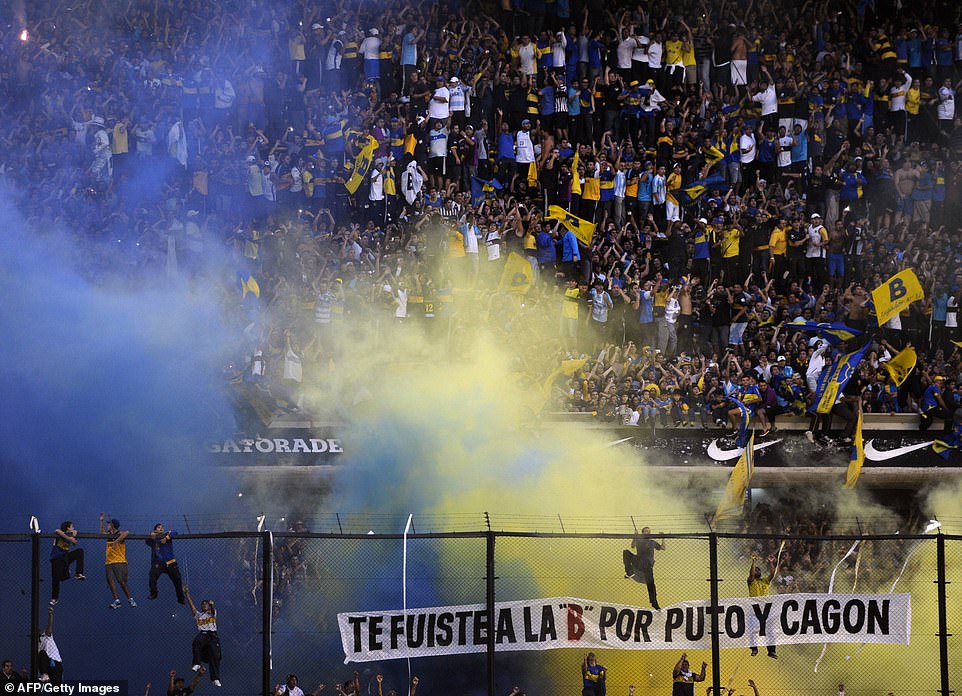 But despite the constant taunts, and the perception of River as the aristocracy and Boca as the blue-collar workers, they both started out very much as dockers looking to play a game of football.

Watching the Superclasico ranks highly on football bucket lists and to observe the stadium during one of their meetings is to experience something unique.

Whether held at Boca’s steep-sided Bombonera [capacity 49,000] or River’s bowl-shaped Monumental [70,127], you will feel the ground shake from bouncing fans and your ears ring from incessant noise.

Supporters will gather hours before kick-off to drape colourful flags and banners, while ticker tape and smoke flares only enhance the captivating spectacle.

Sadly violence at previous fixtures in Argentina means that away supporters are now barred from attending the fixture, not that they would make themselves heard above the ear-splitting din. 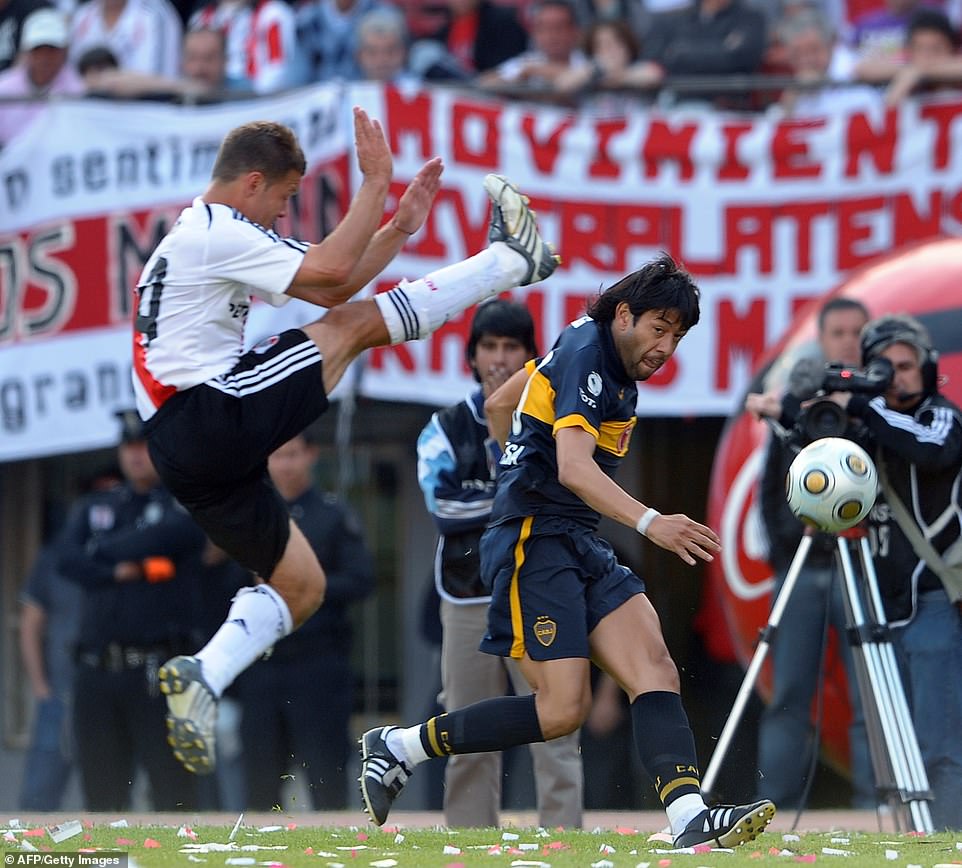 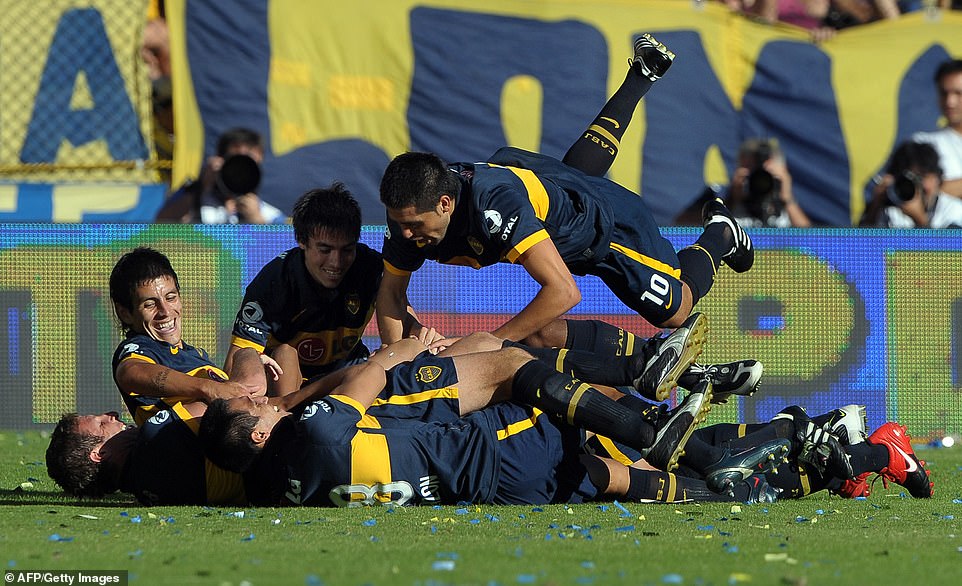 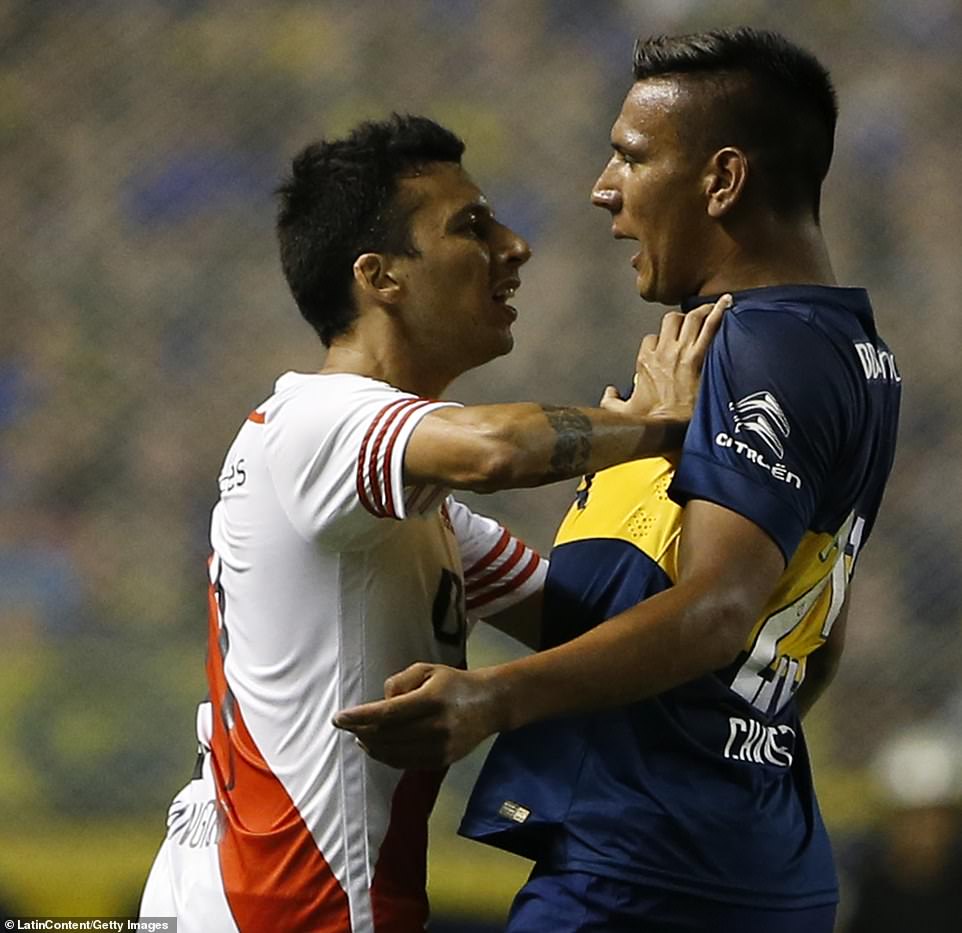 Legions of riot police wielding shields and batons are commonplace at these games. Even if there aren’t any away fans, there are plenty of factions within the home support to keep in check.

And don’t forget that all these fans still have to live with each other in the same city, it’s schools and offices, the rest of the time.

But match weekends take the form of a festival, with the chanting and singing beginning the evening before and continuing right through matchday and for many hours afterwards – win, lose or draw.

Wrangling over who has the more illustrious history is a hallmark of every rivalry, but here are the facts.

River have 36 national championships to Boca’s 33. But Boca have won six Copa Libertadores titles to River’s three. Add in national cups and other trophies and Boca just edge the count 67-63. 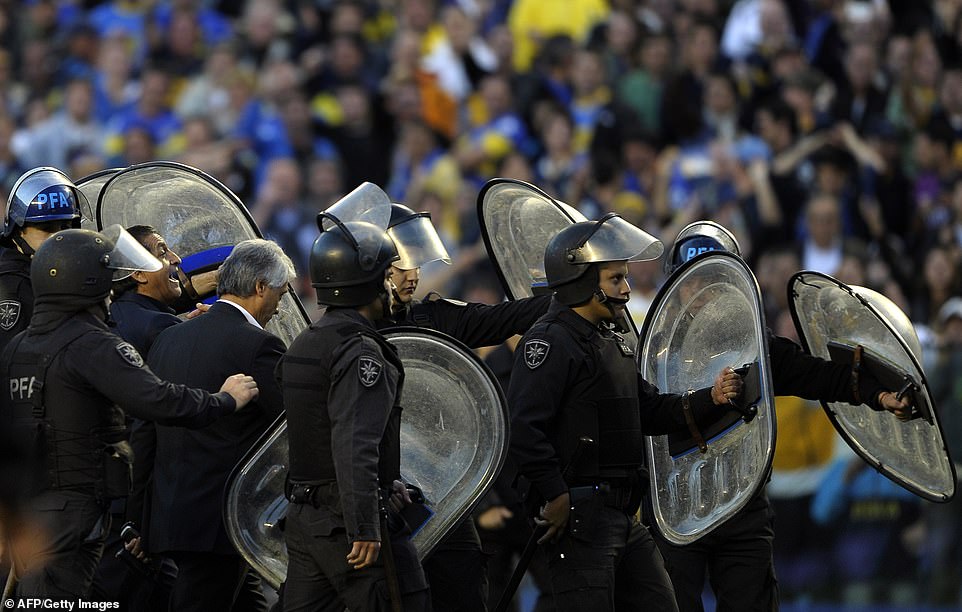 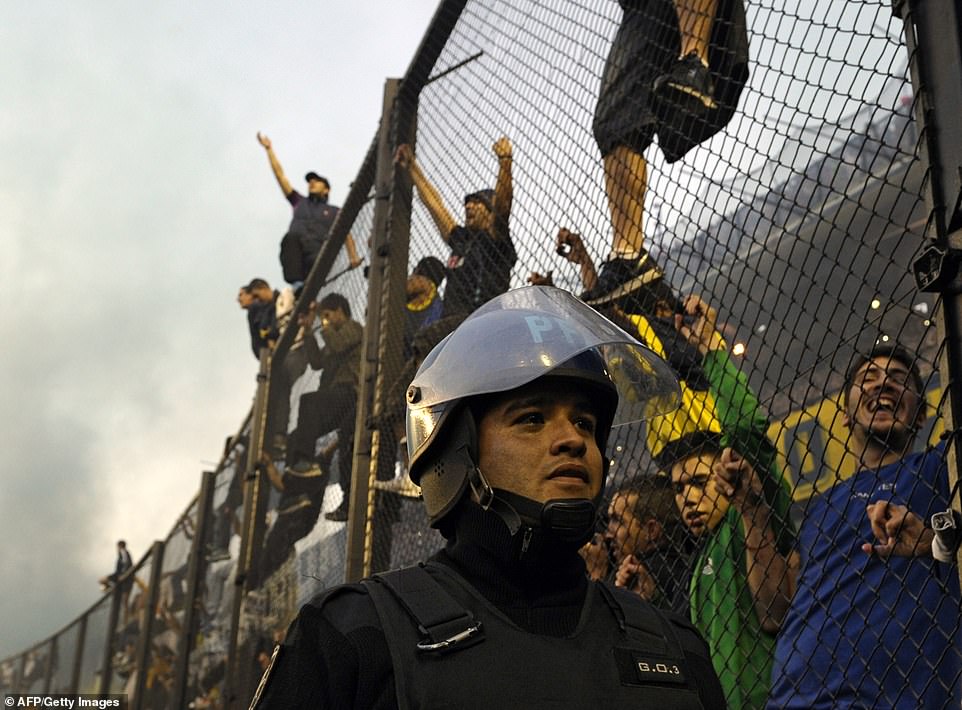 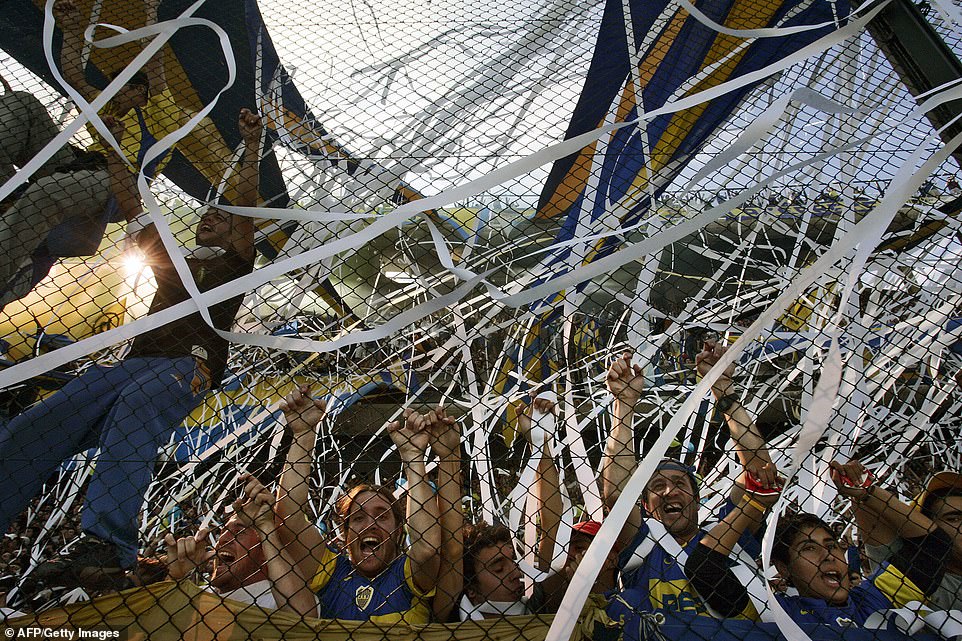 The stadiums are a carnival of colour on Superclasico day, with flags, banners and streamers creating a spectacle 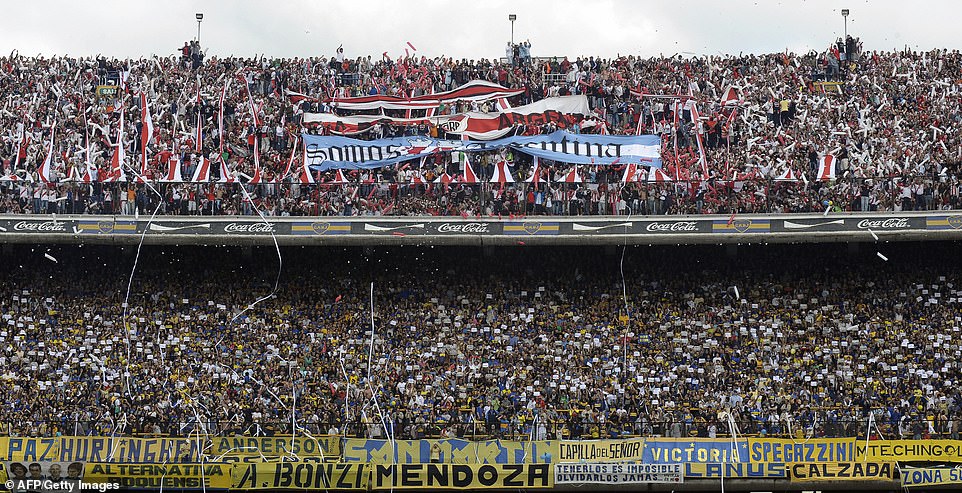 Of course one thing Boca fans will never allow their rivals to forget is their relegation to the second division back in 2011 – ‘that stain will never be erased’, as their chant goes. Boca have never been relegated.

But there are plenty who have bridged these two enemies. Over 100 players have turned out for both, including Gabriel Batistuta and Claudio Caniggia.

The destinies of these two enormously popular clubs have been intertwined for over a century now. Both have had their glories and tragedies down the decades. Pretty much every great Argentine player has experienced the Superclasico.

Now, as they prepare to meet in the Copa Libertadores final, this world-famous rivalry is about to reach a whole new level.

Bruno Fernandes admits his performance was below par against Brighton