Sydney FC has been left to rue another squandered opportunity in the AFC Champions League after letting an early lead slip to lose 2-1 to Aaron Mooy's Shanghai SIPG.

The Sky Blues were dominant from the outset on Thursday night and should have been 3-0 up after the first 15 minutes, but could only muster one goal from a Trent Buhagiar strike. 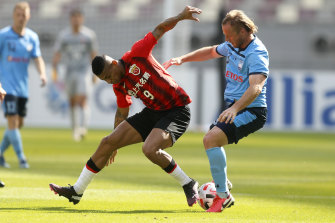 Rhyan Grant ended up in goal for a 10-man Sydney FC on Thursday night.Credit:Getty Images

Their failure to convert those early clear-cut chances has all but dashed their hopes of progressing into the knockout stage of the tournament, with Shanghai's inevitable fightback unable to be contained by the A-League champions – who finished with 10 men after an injury-time red card to goalkeeper Tom Heward-Belle, forcing Socceroo Rhyan Grant to don the gloves for the final moments.

Socceroos favourite Mooy was at the heart of the Chinese side's second-half rally, laying on the cross for Li Shenglong to equalise in the 63rd minute with a free header from point-blank range.

Li then pounced again 11 minutes from time to put Shanghai ahead and drive a dagger through the heart of Sydney, whose winless run in Asia under coach Steve Corica has now stretched to 10 games.

This one will sting more than perhaps any other because the contest should have been put to bed early. 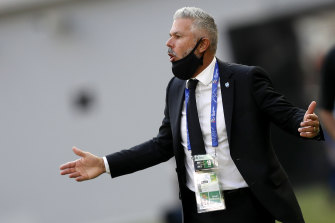 Steve Corica’s search for a maiden win in the AFC Champions League continues.Credit:Getty

The pace of Olyroo Buhagiar up front – filling the vacancy up front left by the departed Adam Le Fondre – exposed a number of early openings for Sydney as they resumed their ACL campaign with palpable urgency at the Khalifa International Stadium in Doha.

Five minutes in, Buhagiar teed up Barbarouses as the Sky Blues surged on a rapid counter-attack, but the Kiwi international blew an easy header.

The duo combined again two minutes later, with Barbarouses turning provider and Buhagiar this time converting the cross to put them deservedly in front.

Ben Warland, deputising for COVID-stricken defender Ryan McGowan, then hit the post with a header from a corner kick in the 14th minute, letting Shanghai off the hook yet again. 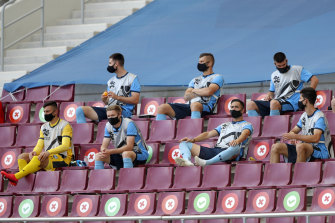 Barbarouses had another golden opportunity early in the second half when Grant played him in with a cutback, only for the Kiwi international to once more undercook his finish.

A team like Shanghai SIPG, even without ex-Premier League stars Oscar and Marko Arnautović, was always going to punish that degree of profligacy, and so it proved.

Sydney, too, were missing a host of key players; six members of the starting team that won August’s A-League grand final were either injured, suspended, otherwise absent or have departed the club.

That meant a debut senior appearance for 19-year-old midfielder Calem Nieuwenhof, while the inexperienced Heward-Belle started in goal with Andrew Redmayne back in Sydney, but Corica's remodelled selection acquitted themselves well.

Heward-Belle, however, never looked comfortable and saw red in the first minute of injury time for a handball well outside the box, after rushing out to suffocate another SIPG raid and badly misjudging the situation.

Despite the undermanned squad, the Sky Blues will look back on this match as yet another in the ACL that has somehow gotten away from them despite getting most things right.

Heward-Belle is now automatically suspended for Sydney's next match, meaning either Adam Pavlesic or Levi Kaye – both untried players – will have to play in goal when they face Korean champions Jeonbuk Hyundai Motors on Wednesday.

With only one point to show from their first three games in Group H, and their next three to be played within the space of just eight days, Sydney are facing an almost impossible task to reach the knockout stage – but they really only have themselves to blame.