Report and free highlights as Billy Sharp nets the winner to give Sheffield United a first Premier League win since July 11 to beat Newcastle, who have Ryan Fraser sent off for two quickfire bookings before half-time

Sharp stepped up 17 minutes from time after referee Andy Madley decided, with the help of the VAR review monitor, that Federico Fernandez had handballed. The goal finally gave Chris Wilder’s side their first win of the season.

The Blades were fully deserving of their victory and should have led from the early stages, with David McGoldrick missing a pair of presentable chances while Callum Wilson headed a rare Toon attack over at the other end.

Two Ryan Fraser bookings within two minutes of each other shortly before the interval made the visitors’ task even harder. After half-time, Sheffield United enjoyed near-total dominance but looked like they could be heading for another frustrating night – before Sharp’s winner finally earned them a first three points of the season at the 18th time of asking.

Man of the match: Ethan Ampadu

There’s nothing quite like a win for a team’s morale – but it remained to be seen what impact Sheffield United’s narrow FA Cup victory at Bristol Rovers would have on the confidence of Wilder’s beleaguered squad.

Within minutes, it became evident. Inside the first quarter of an hour, John Lumdstram curled a yard wide of the far post before his threaded ball through should have been put away by McGoldrick, who pulled a low save out of Karl Darlow.

Newcastle had been dominated by the Blades in this fixture last year before taking three points through two sucker-punch counter goals, and could have provided a similar shock on the half-hour when Wilson headed wide out of nowhere from DeAndre Yedlin’s excellent cross.

That did little to demoralise the Blades from their fine start, with McGoldrick nodding an even better chance from Ampadu’s inviting delivery wide moments later. Burke was then denied a chance to test Darlow by a sliding Federico Fernandez challenge inside the box. 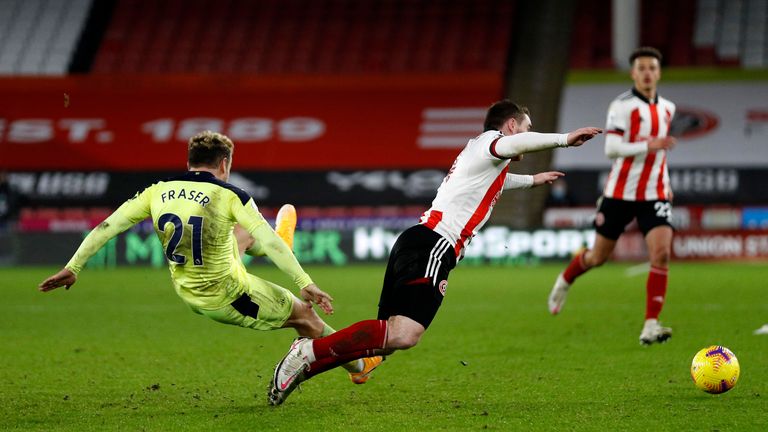 Jayden Bogle, fresh from scoring at the Memorial Stadium on Saturday, then pulled a strong save out of the goalkeeper with Sheffield United preparing for an unusually upbeat half-time team talk. They were handed even more encouragement with Fraser sent off after picking two silly bookings in as many minutes.

Sheffield United’s endeavour and drive continued from the first whistle for the second period with Bogle again pulling a save out of Darlow from a tight angle, but even Wilder’s introduction of Rhian Brewster five minutes after the break did not appear enough to give them the cutting edge they craved.

Newcastle were then down to nine men, with Paul Dummett off injured, when a long ball forward was allowed to bounce before Sharp and Fernandez raced into the box, with the latter penalised after a VAR review for palming the ball away under pressure from the striker. 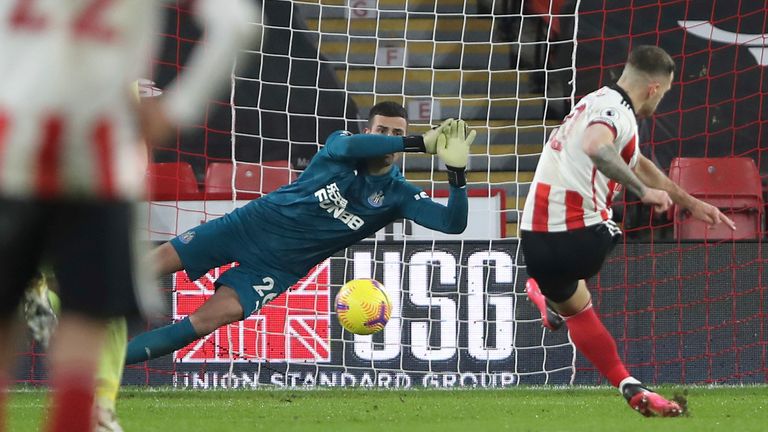 Sharp, only on from the bench 14 minutes prior, made no mistake in beating Darlow from the spot, before Brewster came close to a quick second when he fired just wide after a promising run from midfield.

He went yet closer courtesy of a deflection in the final minutes when Fernandez turned his curling effort onto the post with Darlow beaten. At the other end, Andy Carroll headed at Ramsdale before the goalkeeper was nearly beaten by a Bogle backpass in the final minute of injury time before gratefully watching it trickle wide.

Man of the match – Ethan Ampadu

There were plenty of players who had a point to prove at Bramall Lane on Tuesday night, but Ampadu was certainly near the top of the list and produced the kind of performance which has seen him spoken about in such high regard at Chelsea, albeit less so in recent months.

Without the ball, he made more interceptions and tackles (three each) than any of his team-mates, while with it he deserved to have an assist from a wonderful cross McGoldrick should have buried before half-time.

Newcastle’s next game is a trip to the Emirates Stadium to face Arsenal, also live on Sky Sports Premier League as part of Monday Night Football from 7pm; Kick-off at 8pm.

Dortmund 'give Man United August 10 ultimatum to decide on Sancho'