Sheffield Wednesday’s chances of avoiding relegation from the Sky Bet Championship remain in the balance after they were held to a 0-0 draw by Nottingham Forest.

There were few clear-cut chances in a tight encounter at Hillsborough, though Lewis Grabban missed the game’s best chance when his penalty was saved by Wednesday goalkeeper Keiren Westwood, who had given away the spot-kick after a foul on Anthony Knockaert (45+1).

The stalemate means Darren Moore’s men move three points from safety, though their relegation to Sky Bet League One will be confirmed later this afternoon if Derby avoid defeat against Swansea. Forest, meanwhile, climb above Birmingham into 16th. 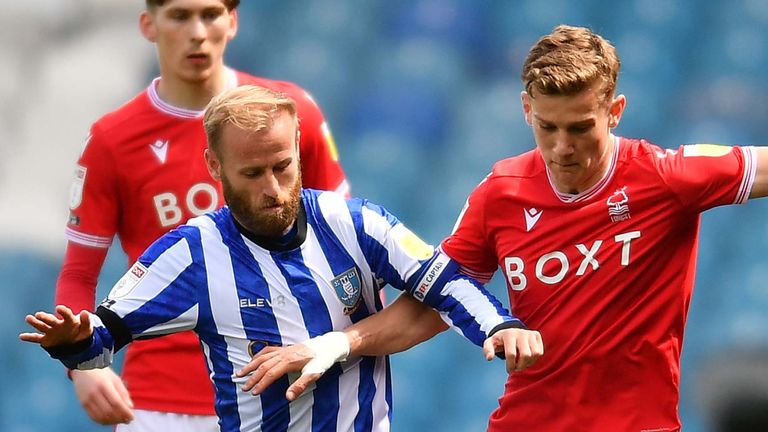 How a crucial game at Hillsborough ended goalless

While Forest had nothing left to play for in the penultimate fixture of the season, the brief was clear for Wednesday: win or draw to stave off the immediate threat of relegation. Defeat just would not be sufficient to keep them in the division.

It soon became clear that it would be a closely-fought encounter at Hillsborough. The lively Kadeem Harris worked some encouraging openings for the hosts, while Forest’s Filip Krovinovic sent the ball skidding across the six-yard box, where Grabban struggled to reach it at the far post.

A game crying out for some drama was granted it in the dying seconds of the first half. Westwood played the ball out to Adam Reach on the left of the penalty area, who mindlessly headed straight back in the direction of his goalkeeper.

Knockaert chased it down, before being sent to the turf by Westwood, who went from zero to hero in a matter of seconds when he got down low to his left to push Grabban’s spot-kick behind.

It was a lively start from Wednesday after the break, but another mistake at the back almost cost them dearly, when Grabban seized on Julian Borner’s reckless ball back into the penalty area, drew Westwood away from goal and struck a shot into the side netting.

The hosts introduced Jordan Rhodes in an attempt to force a winner and he headed a Josh Windass cross narrowly wide, before Windass himself was denied the winner when Brice Samba tipped his powerful drive onto the woodwork. For Wednesday, though, the all-important goal never materialised.

Both teams are next in action at 12.30pm on Saturday, May 8, when the Sky Bet Championship season concludes. Sheffield Wednesday travel to Pride Park to face Derby, while Nottingham Forest host Preston at the City Ground.