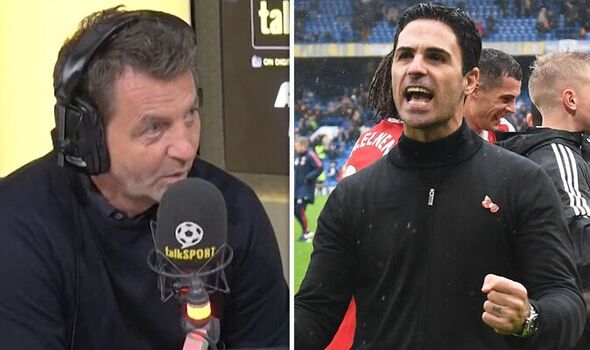 Tim Sherwood claims any team who finishes above Arsenal this season will win the Premier League title. However, the former Tottenham boss insists the Gunners must be active in the January transfer window.

Sherwood says Arsenal’s best two players are the duo they signed from City in the summer transfer window. Gabriel Jesus and Oleksandr Zinchenko were two of five major additions Mikel Arteta made to his squad.

He reckons it would be a “magnificent” achievement for Arsenal to be top at Christmas, something they can achieve if they beat Wolves on Saturday. He can see the north Londoners finishing no lower than second in the table but only if they add strength in depth to their squad in January.

Sherwood told talkSPORT: “The two best players for me are Zinchenko and Jesus, who left Man City to go to Arsenal. It just says everything.

“Interesting to see what they do in the market. If they navigate a way through Wolves, they’re top at Christmas. I mean, magnificent.

“But what can he do? What are you going to do? You can’t do it with this squad. He needs to go in the transfer market.

“Depending on what they do in the market, if there’s a massive drop off from Man City, which we all don’t expect, then why not? Listen, if you finish above Arsenal, you win the Premier League I think.”

Arsenal chiefs are widely reported to be set to back Arteta in January. A central midfielder and a winger are the two most likely positions to be targeted.

Arteta has made the second-fewest number of changes to his starting XI in the Premier League so far this season. But injuries to key players could have a major impact on his relatively small squad.

Following the win over Chelsea, Arteta told talkSPORT that it was another big step in the right direction for his team. He said: “It’s not a statement [win] for us.

“They’re a really young team and I think today they played like a really mature team with composure, determination, quality and with courage to do it in this scenario. It’s another step forward to prove to ourselves that we can do it – that we can play at this level against these players and team and hopefully we can have more belief.

“They’re the steps we have to take as a team and I think today we have taken those steps. Keeping the clean sheet and our defensive performance was really important.”