The Socceroos have officially booked their spot in the final round of qualifying for the 2022 World Cup in Qatar after strolling to a 3-0 win over Nepal.

As expected, Australia made light work of their unfancied opponents at Jaber Al-Ahmad International Stadium in Kuwait City on Saturday morning (AEST) to seal top spot in Group B with one game to spare. 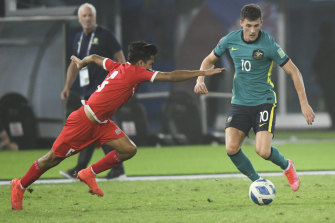 Australia’s Ajdin Hrustic, right, and Nepal’s Suman Aryal fight for the ball during the qualifying match.Credit:AP

Mathew Leckie opened the scoring with an easy header in just the sixth minute before providing the cutback for defender Fran Karacic to score his first international goal just before the break.

Nepal were forced to play out the second half with 10 men after star defender Rohit Chand was sent off for dragging down Martin Boyle when he had broken through to be one-on-one with the goalkeeper – although the Scottish-born winger was guilty of exaggerating what little contact was made.

Boyle then made it 3-0 in the 57th minute when he latched onto a brilliant ball slid behind the Nepalese defence by his Hibernian teammate Jackson Irvine and topped in from a yard out.

It was elementary stuff for Australia, who were dominant in all aspects against a minnow team that stacked bodies behind the ball. They could and should have scored more but will be content with just getting the job done in the frustrating circumstances. 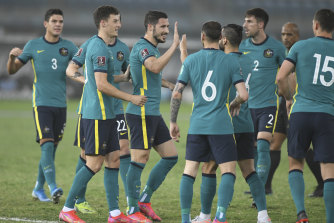 The Socceroos were dominant in all aspects of the match.Credit:AP

Much bigger tests lie in wait for the Socceroos, who are set to face at least two other Asian heavyweights in the crucial final phase of qualifying, due to begin in September.

If Australia finishes in the top two of the five-team group they will be drawn in next, they will earn a berth at next year’s World Cup.

There is a long way to go but the signs remain positive for Graham Arnold’s men after notching their fifth win from five qualifiers, and their third in nine days since arriving in Kuwait to resume on the road to the World Cup.

Ex-Melbourne Victory gloveman Lawrence Thomas was also subbed on for his debut, replacing Andrew Redmayne for the final eight minutes.

Conditions were once again extremely tough for the Socceroos – temperatures hovered near 40 degrees at kick-off while the pitch was choppy after days of repeated use by the teams in the hub, factors that both played into Nepal’s defensively minded game plan.

Ranked 171st in the world by FIFA, Nepal were stoic, stubborn and well organised, and would have been pleased to have kept Australia to just two first-half goals and only one after going a man down.

The Socceroos play Jordan on Wednesday morning (AEST) in their final assignment of this international window, with their position atop Group B unassailable no matter the result.

Sports news, results and expert commentary. Sign up to our Sport newsletter.

What Patrick Bamford told Leeds squad after being caught diving