West Ham weathered a storm and ended with a flurry of endeavour in a goalless draw with Southampton at St Mary’s Stadium.

Saints boss Ralph Hasenhuttl was forced to manage the game remotely from home after a member of his household tested positive for coronavirus – but his side were on top for most of the match although they failed to carve out a clear-cut chance.

The hosts looked to have broken the deadlock on six minutes after Che Adams cut the ball back to Danny Ings, who danced through two defenders and coolly slotted past Lukasz Fabianski – but Adams was offside in the build-up and VAR chalked it off.

Despite Southampton dominance, the Hammers conjured some of the clearest chances. Ryan Fredericks was unable to connect cleanly yards from goal, while Tomas Soucek also failed to bury a chance with the goal gaping.

The best chance of the game fell to West Ham substitute Said Benrahma after Southampton made a mess of clearing Jarrod Bowen’s clipped ball into the box – but Saints ‘keeper Alex McCarthy put his body on the line and secured the point.


Man of the match: Walker-Peters

A game of few chances but with opportunities spurned

David Moyes made five changes to his West Ham starting XI after the disappointing display in a 2-2 draw against Brighton, with Andriy Yarmolenko and Manuel Lanzini earning starting berths after coming off the bench with good effect two days ago.

But the early signs suggested the Hammers were set for another below-par performance as Southampton burst from the blocks and imposed dominance, with Ings blasting home an opener only for it to be ruled out by VAR when Adams was adjudged offside in the build-up.

Minutes later, Adams was on the other end of a chance following effective exchanges between Kyle Walker-Peters and Theo Walcott down the right channel – but his effort slipped behind and he appeared to have drifted offside again.

Despite Southampton’s dominance, the Hammers conjured some of the clearest chances. Yarmolenko looped in a cross for Pablo Fornals, who headed it deeper towards the six-yard box – but Fredericks failed to connect cleanly. 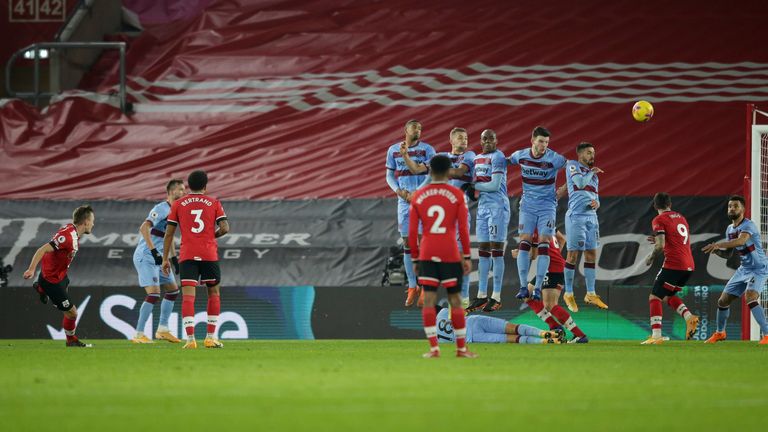 Fornals then provided another opportunity moments later, playing a one-two with Aaron Cresswell and his cross landed at Lanzini’s feet after James Ward-Prowse fluffed his lines – but the Argentinian blazed his chance over the bar.

In the second half, Yarmolenko weaved into the box, looking to pull the trigger on several occasions with his favoured left foot but Oriol Romeu timed a perfect interception to prevent the shot.

Besides Ings’ disallowed goal, Southampton’s only real chances came from distance, with Ward-Prowse firing over from a free-kick in his favoured territory and Walcott troubling Fabianski with a dipping long-range attempt. But the game was destined to end goalless when substitute Benrahma failed to fire past McCarthy with the best opportunity of the game.

However, Moyes will be pleased with his side’s late rally and the return of Michail Antonio provides more positives for the club, having been deployed from the bench on 77 minutes after recovering from a hamstring injury.

Man of the match – Kyle Walker-Peters

The game failed to produce a clear standout performer with so many opportunities spurned, but Walker-Peters provided the most consistent threat and helped drive the Saints’ superior dominance for large periods of the game, frequently combining with Walcott.

What the managers said:

“The point is okay for both teams when you see the whole game, I think. There were chances for both sides. I think we had a bit more on the ball, without having the final action to create a goal. But I think we can be happy with this point.

“The last action is missing at the moment. The last punch around the box. But we don’t concede, and that’s good. When you can’t win, you draw – that’s good. We keep taking points.”

“A good point in the end. I think Southampton are one of the best teams in the Premier League at the minute. They’ve been terrific. So, the first 15-to-20 minutes, they were very good, we couldn’t get any of the ball but we got back into it.

“At the end, maybe we just got the best chance and a chance to win it but, unfortunately, the ‘keeper made a really good save. I thought he’d score, but he didn’t and everyone’s telling me it was a very good save.”

Southampton can now see out the year and rest up before hosting champions Liverpool at St Mary’s on January 4, live on Sky Sports Premier League, while West Ham are set to go again on New Year’s Day when they face Everton at Goodison Park.