Report as Saints dominated possession and chances but, with Stevie May and Chris Kane passing up opportunities in either half, were frustrated throughout by a
resolute Accies defensive display. Hamilton held on for a hard-earned point as St Johnstone’s winless run
stretched to eight games in this 0-0 draw.

Hamilton could – and probably should – have been ahead after just a minute.

Brian Easton’s long ball from defence was won in the air by David Moyo and Nathan Thomas was quickest to react.

He made a bee-line for the box, skipping past a couple of home defenders to earn himself a clear sight at goal. However, Zander Clark denied the striker brilliantly with an outstretched foot.

It was a bright opening from Accies and Moyo headed a Thomas cross wide in the 12th minute.

Hamilton defenders took the sting out of Shaun Rooney and Callum Booth shots before Ali McCann had a penalty claim waved aside in a foray forward that climaxed with Booth curling an effort just too high. 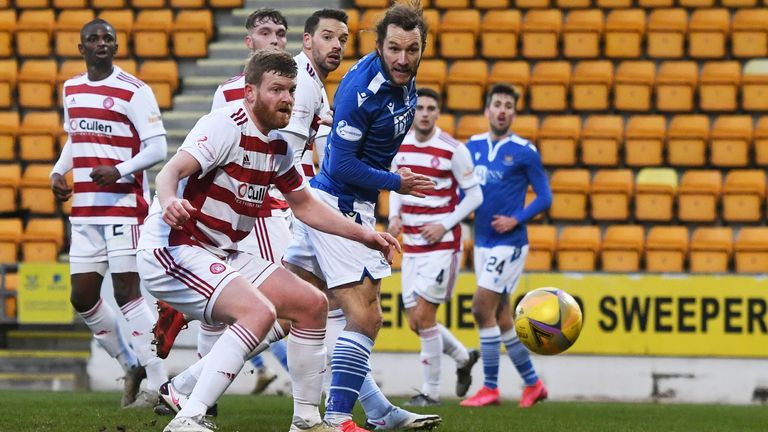 Saints then carved out their best chance in the 29th minute. David Wotherspoon’s in-swinging cross picked out May in the clear but he failed to get enough on his header from six yards and the ball slipped past the far post.

Hamilton briefly relieved the pressure with efforts from Andrew Winter and Thomas but the first-half finished with the home side again on the attack.

Chris Kane outfoxed his marker with a deft turn on the edge of the box but his subsequent drive was too straight to seriously trouble Accies keeper Kyle Gourlay.

The second period continued in much the same vein as the first, with St Johnstone pushing hard for the breakthrough and Hamilton defended stoutly.

Booth twice threatened, but the Saints wing-back drilled his shot just wide in the 50th minute and then saw another effort deflected onto the roof of the net seven minutes later.

Hamilton enjoyed some brief respite on the hour mark when Thomas ran from well inside his own half, using his pace to scamper clear of the home defence, but he screwed his eventual shot high and wide.

McCann and May both shot wide before Saints created a gilt-edged opportunity to clinch all three points with just six minutes left.

Danny McNamara’s cross was perfect for the unmarked Kane but he glanced his header off target from just six yards out.

In an increasingly desperate finish from the Perth side, Wotherspoon then headed wide before substitute Michael O’Halloran sliced his shot into the side netting after Craig Conway stabbed a pass into his path on the corner of the six-yard box.