Stephanie Frappart reached another milestone on Saturday when she became the first female referee to take charge of a men’s World Cup Qualifier during the Netherlands’ 2-0 win over Latvia in Amsterdam.

Steven Berghuis and Luuk de Jong scored either side of half-time as the Netherlands got their 2022 Qatar World Cup qualifying hopes back on track after a shock 4-2 loss to Turkey in their opening match.

She also refereed the Super Cup match between Liverpool and Chelsea in 2019, and the women’s World Cup final between the US and the Netherlands the same year. 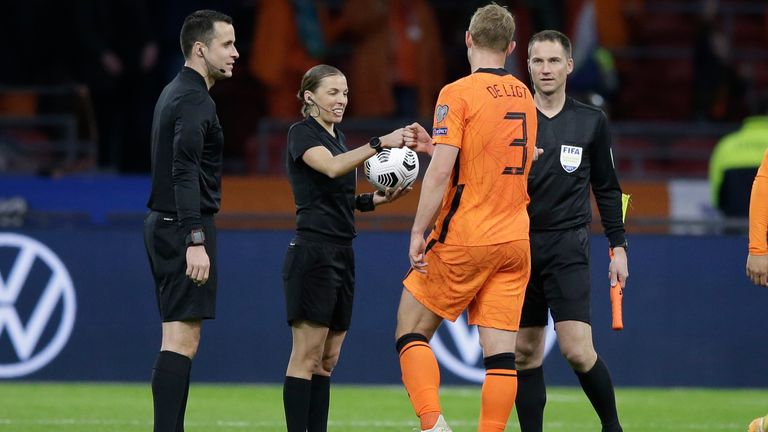 Before the match, the Dutch players wore t-shirts designed to highlight the plight of migrant workers in Qatar, hosts of the next World Cup, joining similar protests made by Norway and Germany players at previous games.

The Dutch walked out onto the field before the start of the game wearing black shirts with the slogan: “Football Supports Change”. Georginio Wijnaldum’s captain’s armband carried the same message.

The match was played in front of 5,000 spectators in the Amsterdam Arena as part of a government-supported study into the amount of contact in crowd situations.

The Dutch now meet Gibraltar in their next group game on Tuesday while Latvia visit Turkey.

Premier League players out of contract in summer transfer window