Steve Cook scored a second-half winner as Bournemouth scraped into the Carabao Cup quarter-finals with an unconvincing 2-1 win over Norwich.

Defender Cook smashed home following a corner 18 minutes from time at the Vitality Stadium to see off the dogged Championship visitors.

Norwich more than matched the hosts on Tuesday evening and looked like they might cause an upset when Onel Hernandez cancelled out Junior Stanislas’ first-half opener.

Victory for the Premier League Cherries, who are sixth in the top flight, maintains their unbeaten home record and puts them in the last eight of the tournament for the second successive season.

Ahead of kick-off there was a minute’s silence in memory of the five people killed in Saturday’s helicopter crash in Leicester.

Both sets of players wore black armbands following the tragedy outside the King Power Stadium, which claimed the life of Foxes’ owner Vichai Srivaddhanaprabha and led to the postponement of Leicester’s cup clash with Southampton. 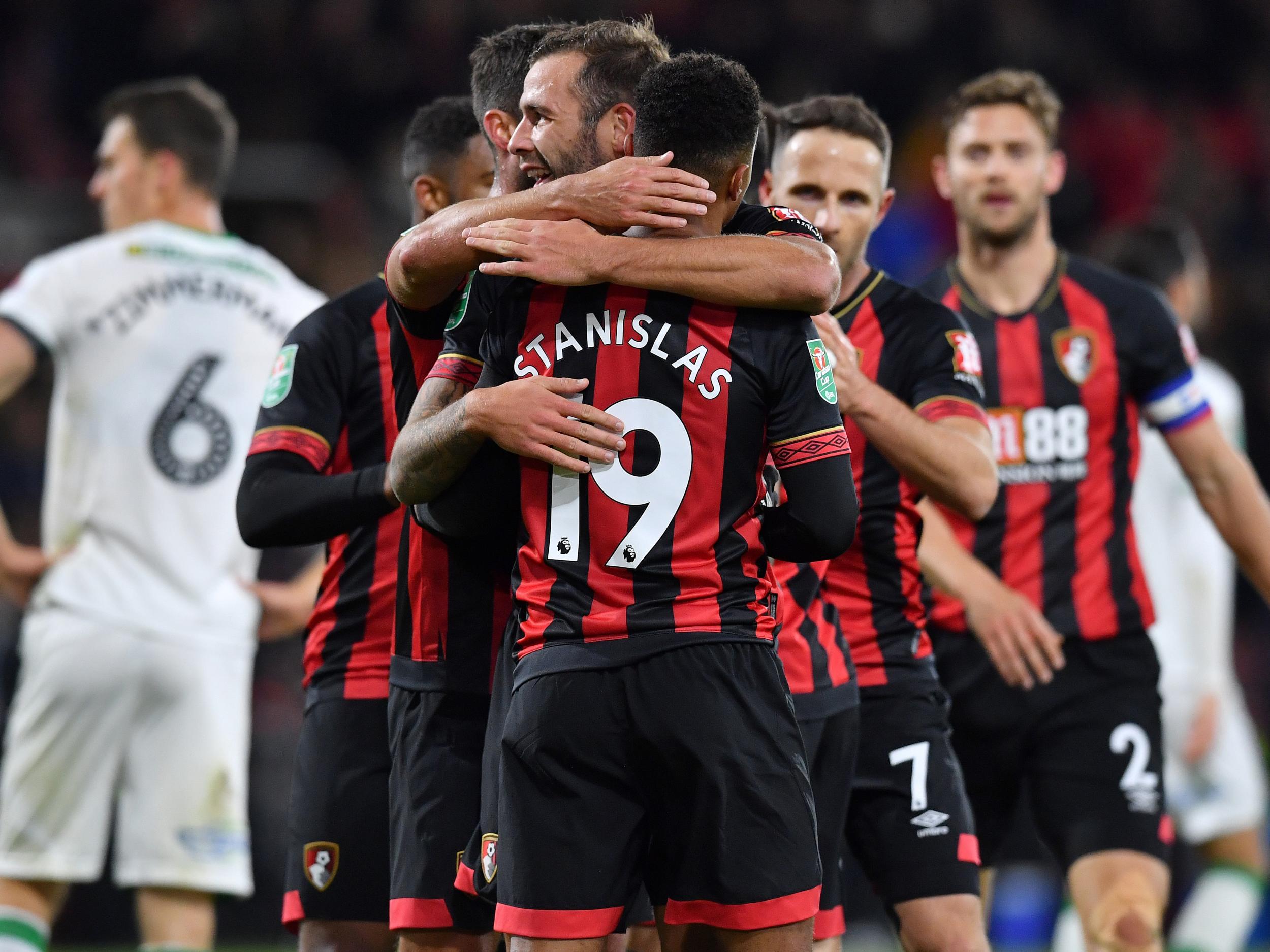 However, in-form Norwich, who also made eight changes for the tie, had the better of the first-half play and edged possession.

The Canaries – fourth in the second tier following eight wins from 10 in all competitions – threatened an opener when Felix Passlack flashed an attempt across goal following Mario Vrancic’s superb cross-field pass.

Stanislas put the hosts in front six minutes before the break. Having received the ball wide on the left from Defoe, the forward advanced into the box, bamboozled Alex Tettey with a couple of step-overs and smashed his third goal of the campaign into the roof of Michael McGovern’s net.

Canaries boss Daniel Farke, celebrating his 42nd birthday, would have been pleased with his team’s response to the setback

Midfielder Vrancic then shot agonisingly wide after tricking his was past Dan Gosling, while German forward Srbeny – who scored twice in the earlier rounds of the competition – rattled the inside of the right post.

Norwich, two-time winners of this competition, have reached the last eight just once in the past 22 seasons. 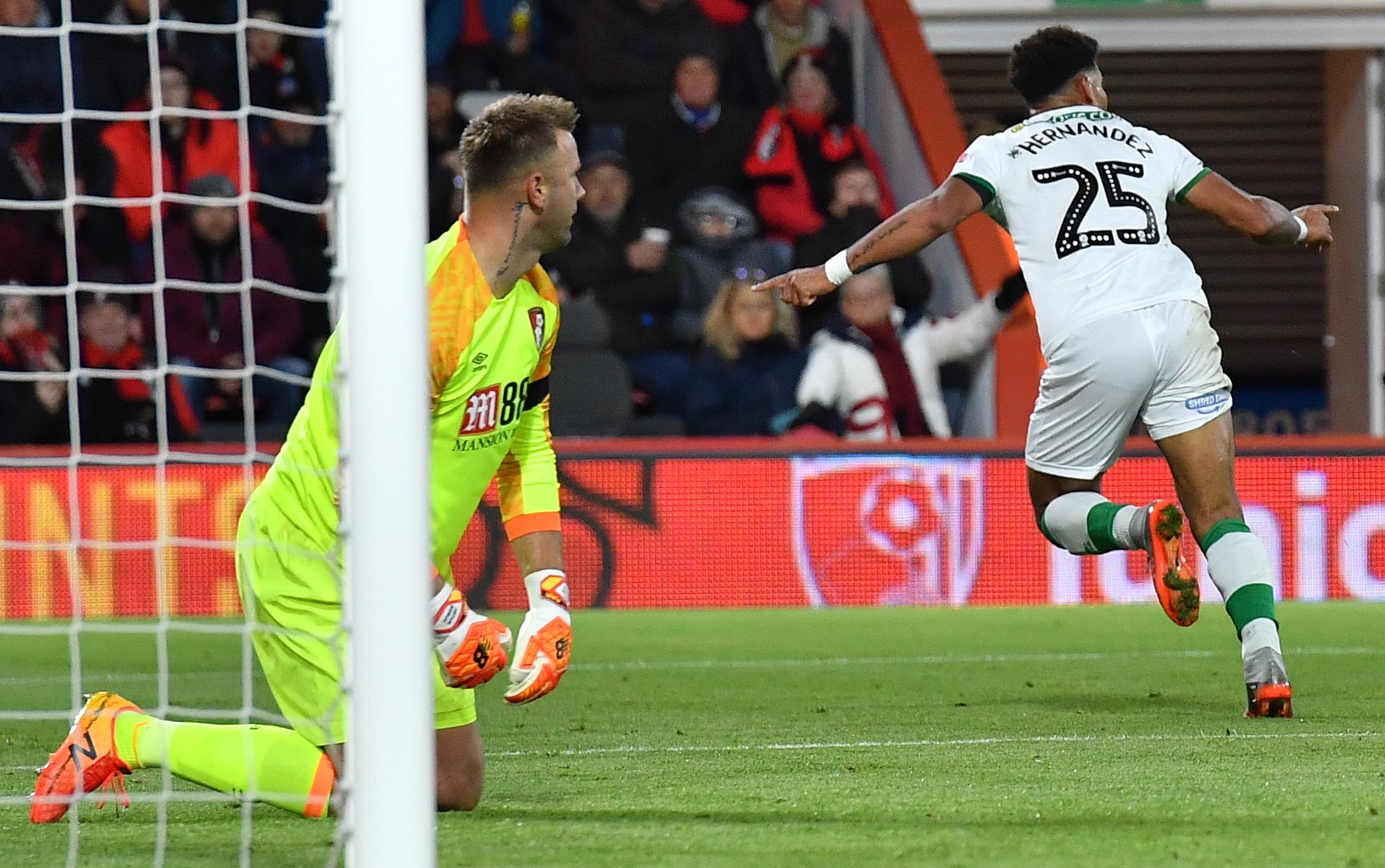 They continued to cause their hosts problems after the break and levelled with 20 minutes remaining.

Tom Trybull lifted the ball over Bournemouth backline and Hernandez, who had earlier tested Boruc with a low shot at the near post, bobbled a finish into the bottom left corner.

Parity lasted all of two minutes though as Bournemouth sealed their place in Wednesday evening’s quarter-final draw.

City failed to clear a left-wing corner and, after Pugh’s initial effort was blocked, Cook blasted through a crowded penalty area to the relief of the home fans.

The visitors were given seven minutes of added time to take the match to penalties but substitute Jordan Rhodes headed wide from an excellent late opportunity as their three-match winning run ended.