Report and highlights from the Sky Bet Championship clash between Swansea and Preston at the Liberty Stadium as Matt Grimes’ late own goal dealt another blow to Swans’ bid for automatic promotion on Easter Monday.

Scott Sinclair came off the bench to haunt his former club by creating a last-minute winner that put another dent in Swansea’s promotion hopes as Preston ran out 1-0 winners.

Sinclair scored a hat-trick in the play-off final for the Swans at Wembley in 2011 that took them into the Premier League for the first time.

A decade on it was his shot that went in to the home net via the unfortunate Matt Grimes to earn Preston the points.

It was nothing less than they deserved after dominating most of the match and creating the clear-cut chances. It was Preston’s first win in Swansea for 60 years and made it four points out of six since the departure of Alex Neil. 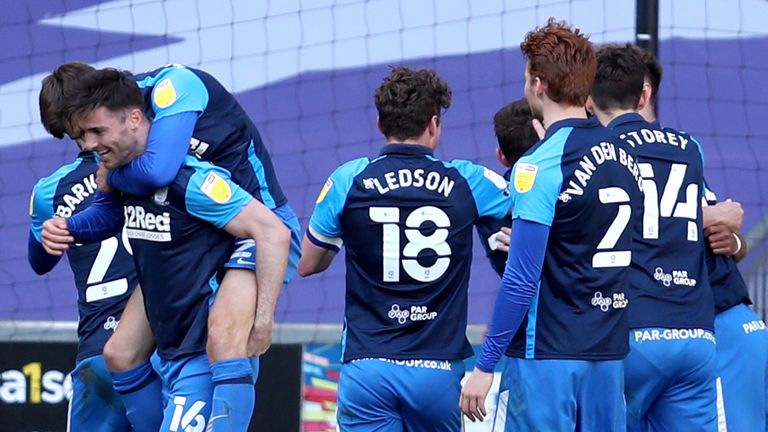 It was the fourth game in a row that Swansea had failed to score and their fourth defeat in a row – the first time that has happened to them under Steve Cooper.

Cooper made four changes to the side that had slumped to a third successive defeat at Birmingham on Good Friday and also tinkered with his formation, switching to a back four instead of three.

Ben Cabango, Ryan Manning, Conor Hourihane and Morgan Whittaker all came in to a side looking to keep in touch with the top two teams. Watford’s 1-1 home draw with Middlesbrough meant they were 10 points behind second place with games in hand.

Cooper had never lost three games in a row in charge of the Swans before last weekend, but equally worrying was that his side failed to score in all three defeats.

Swansea have the best defensive record in the Championship, but they have scored the fewest goals of the promotion candidates.

Preston arrived for Frankie McAvoy’s second game in temporary charge looking to build on their 1-1 home draw with league leaders Norwich last time out and it was the last-gasp hero of that game, Brad Potts, who had the game’s first clear chance in the 21st minute.

Preston had done all the pressing up until that point and Potts’ right-footed effort fizzed over the bar from the edge of the area.

That was a warning to the home side and the Preston dangerman forced Freddie Woodman to push another flicked effort over the top 10 minutes later after Jamal Lowe had given away the ball and the visitors had put together an incisive counter attack.

Swansea’s first real chance came from a free-kick that gave Cabango a chance to attack in the Preston box, but his header went narrowly wide.

The home side then gave Preston one last chance to break the deadlock at the end of the first half when Marc Guehi hauled down Ched Evans on the edge of the area. He picked up a yellow card before Potts blasted way over the top.

New Jamaica international Lowe picked up a yellow card rather than a penalty in the 64th minute went he went over the top of Preston goalkeeper Daniel Iversen.

Preston were gifted another great counter-attacking opportunity when Connor Roberts gave away the ball just inside the visitors’ half and they were quick to send Potts racing forward.

His shot from the left hand side of the box was part blocked by Grimes and it spun just over the bar, but the midfielder was not as fortunate when Sinclair tried his luck in stoppage time.