Derby’s fight for Sky Bet Championship safety will go to the final day of the season after Swansea came from behind to inflict a 2-1 defeat on Wayne Rooney’s side.

The Rams were on course to beat the drop after Tom Lawrence’s header at the start of the second half gave them the advantage in Wales.

But a quickfire comeback sparked by Derby academy product Morgan Whittaker and completed by Connor Roberts condemned Rooney to a sixth successive defeat. 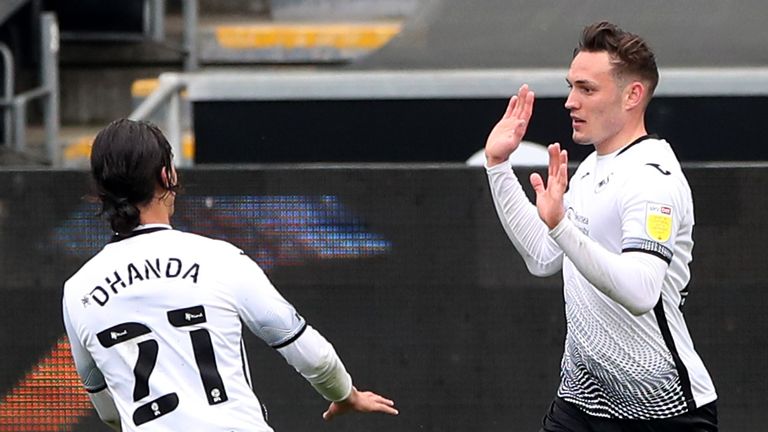 Safety is still in Derby’s hands but they are hovering dangerously close to the bottom three ahead of next weekend’s final fixtures.

The Rams currently sit three points clear of the relegation zone, but Rotherham could close that gap if they win their game in hand against Luton on Tuesday.

Derby’s fears of dropping down to the third tier of English football for the first time in 35 years are edging closer to reality.

Rooney made a single change to his team from the home defeat to Birmingham, with the inclusion of Polish winger Kamil Jozwiak in place of Lee Buchanan.

Swansea head coach Steve Cooper made five changes to his side, bringing in Whittaker and resting star man Andre Ayew. There were also recalls for Yan Dhanda, Korey Smith, Ryan Bennett and Roberts.

Derby almost got off to a nightmare start when Nathan Byrne failed to control a clearance on the halfway line. Jamal Lowe burst clear, with only Jozwiak tracking back, but his pass to the supporting Whittaker was too heavy to control.

Derby right-back Byrne was booked for a late aerial challenge on Lowe after 26 minutes and could have been shown a second yellow card with three minutes of the half remaining after another crunching challenge on his former Wigan team-mate.

The defender escaped further punishment as the first half ended without a goal but the deadlock was broken after two minutes of the second period.

Byrne had a dangerous cross half cleared back to his feet before curling in another towards the back post, where Lawrence got in front of his Wales colleague Roberts to head into the bottom corner.

However, Morgan sparked the rapid turnaround after 63 minutes.

A deep cross from Dhanda found Ben Cabango at the back post and Whittaker latched on to his cushioned header and squeezed a header of his own over the goal line despite the efforts of Kelle Roos.

The Derby collapse continued two minutes later after an expertly flighted pass from Matt Grimes picked out Roberts, who side-footed home a volley from the edge of the six-yard box for what proved to be the winning goal.