Sydney FC's clash against Melbourne Victory on Sunday will be one of the most expensive forward line battles ever in the A-League finals with more than $10 million worth of attacking talent on display.

The two biggest clubs in the competition are also the highest spenders this season and the bulk of their investments have unsurprisingly been directed towards the pointy end of their attack. 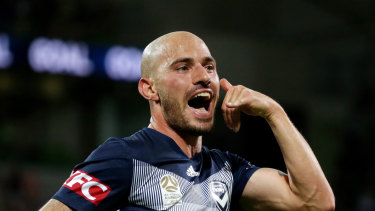 Melbourne Victory's likely attacking trio on Sunday of Ola Toivonen, Kosta Barbarouses and James Troisi, as well as creative midfielder Keisuke Honda, are understood to be pulling combined salaries of about $5m this season. The contract of Honda is reportedly worth $2.9m, joint funded by Football Federation Australia while Victory's second marquee player, Troisi, is understood to have a contract worth close to $1.2m per season. Sources suggest Ola Toivonen and Kosta Barbarouses are two of the highest earners inside of the salary cap for Melbourne and collectively are being paid close to $1m this season.

Not to be outdone, about $5.5m this season is landing into the bank accounts of the Sky Blues' four attacking outlets for the semi-final derby – Alex Brosque, Milos Ninkovic, Siem de Jong and Adam Le Fondre. While Sydney's captain, Brosque, was prepared to accept the A-League minimum salary of $64,113 if it helped the club retain as many key players as possible, it's understood his bosses weren't willing to offer such a low remuneration.

Brosque and his striker partner – former English Premier League player Le Fondre – are paid a combined sum of about $700,000 per season inside the salary cap.

Serbian international Ninkovic is paid just under $900,000 as one of Sydney FC's marquee players while fellow marquee attacking midfielder de Jong has a contract with the Sky Blues worth about $1.25m.  It means Sydney FC's wage bill for those four is in the region of $2.8m this season.

However, de Jong is on loan from Dutch giants Ajax, who continue to pay the bulk of his salary. His deal with the UEFA Champions League semi finalists is valued at an estimated $4m per season, meaning the true value of the combined wages of all four will likely tip over that of Victory's quartet.

De Jong is set to start on Sunday after being rested from Sydney FC's midweek match against Ulsan in the Asian Champions League, sparing him the travel toll associated with the quick trip to Korea and back. Brosque is another cleared to play having overcome a niggling heel injury sustained while scoring in last month's 1-1 draw with the Wanderers while Sydney fullback Rhyan Grant returned to full training on Friday after his injury scare.

Grant sustained a hamstring strain during the second half of Sydney FC's 2-0 defeat to Newcastle Jets in the last round of the regular season but was cleared of any serious injury.

"It would have been nice to go to Korea but in hindsight, having that little rest and getting the hammy right was quite good. It was a pretty chock-a-block schedule there for a while so to get a bit of rest in the legs is only going to benefit me," Grant said.

Those who played on Tuesday night in the 1-0 defeat to Ulsan returned to training on Friday still overcoming the fatigue of travel. While Melbourne rested the core of their squad from their midweek ASL match in Korea, the Sky Blues took a strong squad to Ulsan.

However, Grant believes those Sydney players who travelled will recover in time for the Big Blue.

"Everyone who played is fit and ready to go and there have been no injuries," Grant said.