August 13th is Equal Pay Day for Black women this year. It’s a measure of just how underpaid they are relative to White men.

The upshot: Black women had to work an additional seven and a half months this year on top of the 12 months they worked last year just to make as much as their White, non-Hispanic male counterparts did in 2019. That’s according to the Equal Pay Today Campaign, an umbrella group of organizations advocating for pay equity. It based its estimate on the median annual earnings for full-time, year-round workers using data from the Census Bureau.
As a result, the National Women’s Law Center estimates Black women lose out on roughly $1 million of income over a career.

“For Black women, they find themselves sitting at the intersection of gender and racial discrimination, and when those things are combined you’ll see a bigger discrepancy in things like pay,” said Shannon Williams, the director of the Equal Pay Today Campaign.
For comparison, Equal Pay Day for women overall was March 31st this year.

But median earnings for full-time workers don’t necessarily account for whether they are otherwise on a level playing field in terms of education, experience and geographic location.
Nor does it reflect that Black women typically work fewer hours and therefore make less than White men. That’s in part because they’re more likely to be unemployed or work part-time, said Valerie Wilson, director of the program on race, ethnicity and the economy at the liberal Economic Policy Institute.
EPI did account for those factors and found that, based on average hourly earnings, Black women still earned only 66 cents for every dollar White, non-Hispanic men made.
“While this large pay gap has always been unjust and offensive to the millions of working Black women in this country, it is especially so under the current health and economic crisis,” Wilson wrote in a blog post.
EPI, which used data from the Labor Department’s Current Population Survey, went further and looked at the hourly pay for occupations that have been deemed essential during the pandemic of 2020, including doctors, nurses, teachers, child care workers and cashiers. 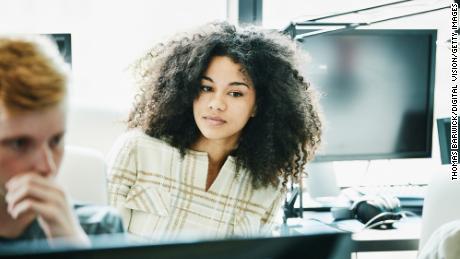 Overall, it found that Black women earn between 11% and 27% less than White men — even when Black women make up a larger part of the workforce, as they do in teaching, nursing and child care.

The biggest gap exists in the job that requires the most training and educational investment. Black women doctors make 73 cents for every dollar their white male peers make.
As egregious as the pay gap for Black women is, it’s not even the worst out there. The Equal Pay Today Campaign won’t be marking Equal Pay Day for Hispanic women until October 29.
Source: Read Full Article