The Women’s Super League, which features a host of Matildas stars, will benefit from prominent free broadcasts in Britain for the first time after the BBC and Sky Sports agreed to a “landmark” three-year, multimillion-dollar TV rights deal.

The BBC will broadcast 22 live games, with a minimum of 18 shown on BBC One or BBC Two from next season. Sky Sports will show up to 44 matches. It has been reported the deal is worth about £8 million ($14.3 million) a season. 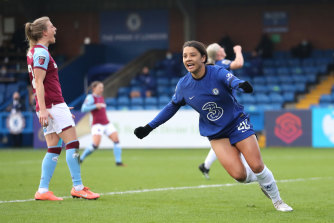 Matildas star Sam Kerr has shone in the Super League for Chelsea this season.Credit:Getty Images

The English FA’s director of the women’s professional game, Kelly Simmons, said it was the most lucrative domestic TV rights deal for a women’s football league.

“This is a landmark deal, not just for the WSL but the whole of the women’s game — it’s really going to help us to grow and engage our fan base,” she said. “It is transformational. This is mainstream, this is prime slots on television, big audiences, week in week out. And I think it’s such an exciting step for the women’s game.”

Matches not selected for broadcast will be shown live on the FA Player. The agreement with both broadcasters will run until the summer of 2024, the BBC said.

Previously, WSL games on the BBC had been shown live only on streaming or interactive TV services rather than on the two channels that appear at the top of digital programming guides.

“We are delighted to offer the FA Women’s Super League a free-to-air platform to ensure the sport, and the players, connect with the widest possible audience,” said Barbara Slater, the director of BBC Sport.