The A-League may have found the quickest way to bridge the gap in quality with the world's best leagues – and it isn't signing high-profile players.

Long has it been theorised that a winter season would equal faster-paced football. Now data suggests the hunch is correct. 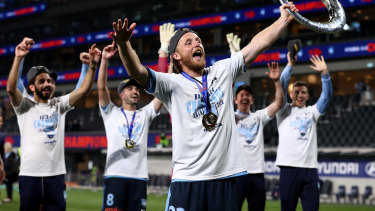 Champions Sydney FC played more games in winter than any other A-League side. Credit:Getty

During the recent winter hub, the best teams in Australia were operating at 90 per cent of the pace of the quickest teams in Europe and Asia. In the peak of summer in previous years, that dropped to as little as 70 per cent.

If the COVID-19-enforced winter series was a test for a permanent switch from summer to winter, the canary has survived the coal mine – at least when measuring the technical benefits. Studies conducted by Football Federation Australia's analysts found a significant improvement in the game's pace and precision when the league was played in July and August.

The main indicator used by FFA analysts to judge the tempo of the game was passes per minute of possession. Going by this year's standards, they found the world's best to be Borussia Dortmund with 16.4 PPM of possession. Second was Ange Postecoglou's Yokohama F Marinos with 16.2, with Barcelona, Bayern Munich and Manchester City close behind.

"The fans and commentators will have their own views but what we saw across the league was that during the re-start period, if we measure tempo by the amount of passes per minute of possession, each team improved," FFA chief James Johnson said.

The data suggests there is a clear correlation between tempo of games and climate . According to FFA sources, the lowest rates of passes per minute of possession occurred in December and January. In December 2017, only three teams were above 13 while one was as low as 11.4.

“There is more for the game to look at but the data that FFA has collected from the restart tells us that teams certainly moved the ball a lot quicker during the cooler months of the restart compared to the period before the suspension," Johnson said. "This also accords with much of the feedback FFA has received from our technical team about the matches during this period.”

Sports scientists suggest that increased tempo is reflected by players' athletic performance. No team played more games in the recent winter hub than Sydney FC and their strength and conditioning coach, Chris Pappas, noticed a significant increase in some players' match data in July and August. 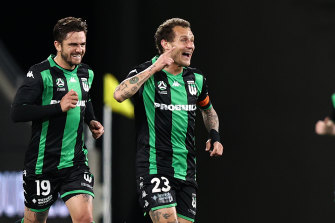 While there are significant benefits to training in heat – just as there are at altitude – the winter months showed players could perform at higher levels during games and felt better doing so.

One player was 10 per cent better in five fitness categories including high- speed running, very high speed running and repeat high-intensity efforts. A second player's metrics were up to 20 per cent higher in four of those categories while a third reported his Rate of Perceived Exertion was 18 per cent lower despite the heavy workload.

"The perception is probably bigger than the real metrics," Pappas said. "In the winter time, they said exactly that. They feel like they can get into position easier, if they need to track back they can."

That comfort could be the key to the higher tempo.

The PFA suggests players have preferred playing in the cooler climate while FFA sources say the softer winter playing surfaces may also contribute to the faster tempo of games.

While analytical and fitness data might vindicate the switch to winter the commercial metrics aren't as encouraging.

Already battling another pay dispute, the players' union, the PFA, wants the financial implications to be heavily considered should the A-League move into a window already congested by rival football codes. As reported by the Herald last month, the A-League’s media space had shrunk by two thirds during winter while the grand final witnessed a 14-per-cent drop in Foxtel ratings from last year, despite restrictions on fans allowed at the stadium.

However, on advice from its members, the PFA believes climate must be a priority in determining the windows for future A-League seasons.

"Clearly in both the W-League and A-League heat has been a factor that has had an impact on the wellbeing of players and the quality of the spectacle," PFA co-chief executive Beau Bush said.

"As we now make important decisions in relation to the season windows of both the A-League and W-League we must ensure we continue to build on the positive steps taken in recent seasons and allow for the flexibility to navigate the challenges posed by weather to ensure both the health and safety of players and the standard on the pitch."

While there is a risk less may watch, the reward appears to be a significantly better product.

People seek relocation to suburbs due to coronavirus