Harry Kane missed a glorious one-on-one chance as Spurs pushed the Premer League champions all the way, but heroics from Ederson helped Pep Guardiola’s men ride the storm and secure the three points necessary to move back to the top of the table.

Sportsmail’s ADAM CRAFTON was at Wembley to run the rule over both sets of players. 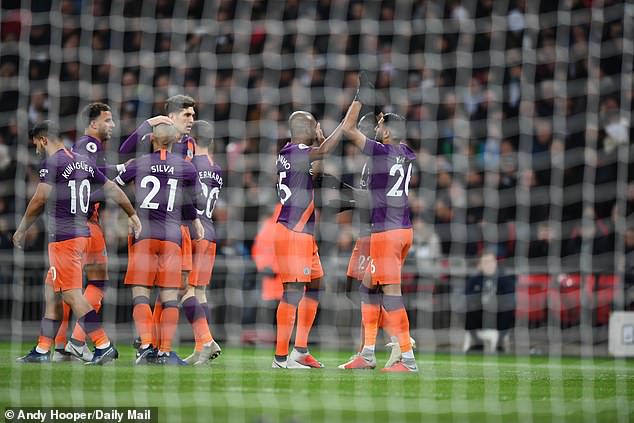 Terrific save down low to deny Mahrez a second but awful kick led to City opportunity from free-kick in second half. Kieran Trippier – 5

Fatally misjudged header let Sterling in and he was then flat-footed and left for dead by his England team-mate for City’s opening goal.

Never looked at ease in dealing with the movement and invention of Aguero and City’s cast of midfield runners.

Finding it harder this season after superb debut season. Not developed same bond wth Alderweireld as he enjoyed with the injured Jan Vertonghen.

Beaten to the punch by Mahrez as Spurs fell behind early but a superb block to deny Sterling in the second-half.

Surprise selection but started at high intensity and made presence felt in midfield. Wasted fine opening after breaking behind Mendy. 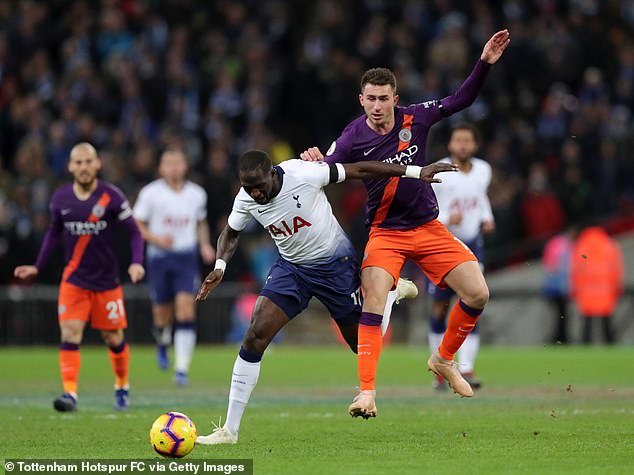 Form has improved of late but had his hands full attempting to cope with City’s brilliant Silva double act in midfield.

Age and injuries took their toll in the big games last season and during World Cup. Pattern repeated itself here.

Plays with added bite and intensity these days but did not offer the end product that Alli and Eriksen usually provide. 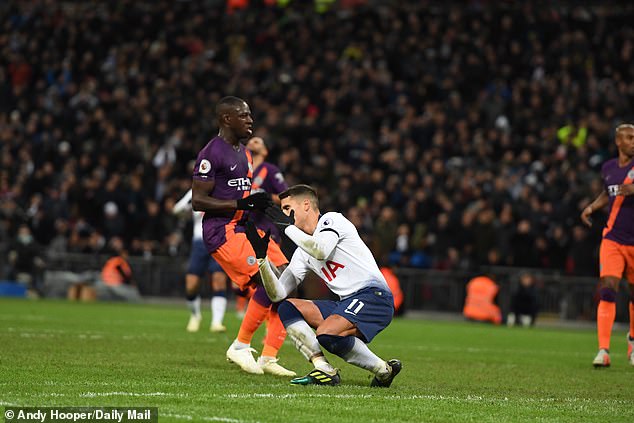 Influence has faded in recent weeks and struggled to exploit space here. Booked for a pathetic dive in first-half.

First touch let him down when bearing in on Ederson in first-half but close with a long-range effort early on. 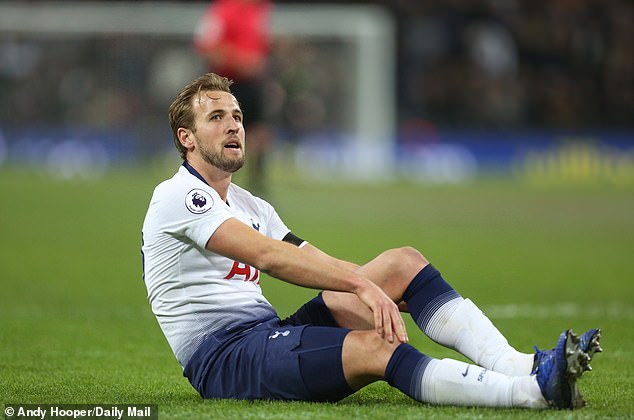 Hamstrung by injuries and circumstance but his team really must stop starting the biggest games so sluggishly. It has now cost Tottenham in home games against Liverpool, Barcelona and City. 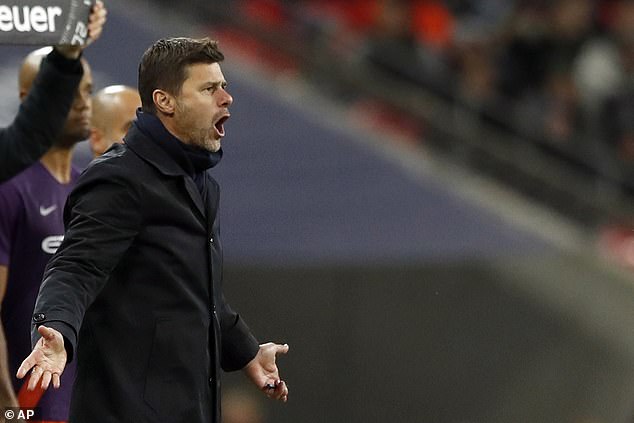 Tottenham manager Mauricio Pochettino was hamstrung by injuries and circumstance

Helped Spurs gain the initiative and keep the ball better as they pressed for late equaliser.

Brilliant break and laid a chance on a plate for Lamela, who blazed over.

Brought on for set-pieces late on but could not deceive City backline.

Monstrous kick launched City’s attack for the early goal and he commanded his box with authority when Spurs turned up the heat.

Worked up on his return to former club. Kicked advertising hoardings in frustration in first period and laid into Sergio Aguero in second-half.

Calming presence and looks to have really nailed down starting place after difficult end to last season.

Had the better of Kane and partnership with Stones may become the bedrock of City’s long-term future. 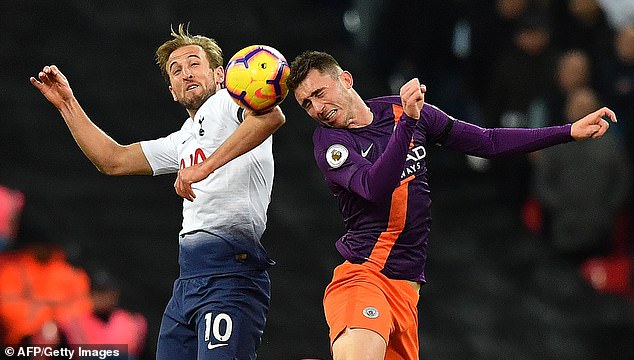 Spared by Tottenham’s wastefulness after two poor lapses of concentration in first-half. Does not convince defensively.

Usual array of smart fouls to break up play and assured passing at the base of the City midfield. Booked after his fourth foul.

The biggest compliment is Manchester City could afford to start Kevin De Bruyne on the bench as Silva continues to shine.

When he ticks, City tick and the Spaniard was at his intricate best dictating the midfield for long periods. 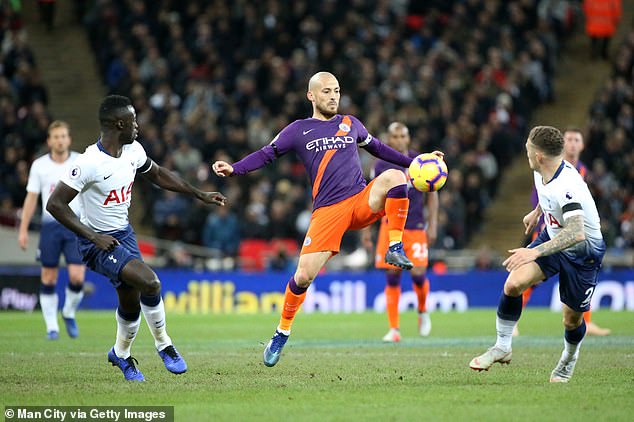 Not at his most dangerous and very few clear sights of goal, much like his recent outing at Anfield. 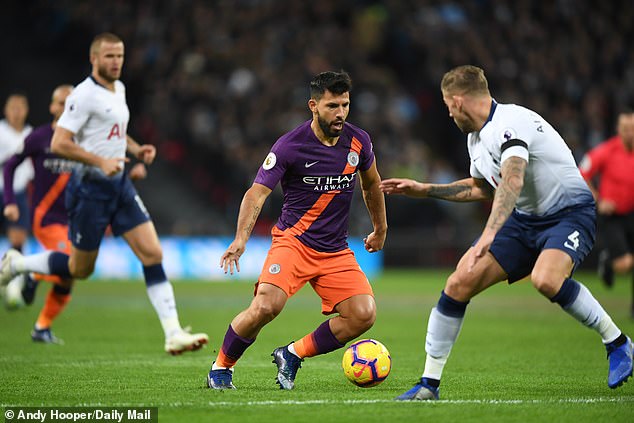 As at Anfield, Sergio Aguero (centre) was not at his most dangerous and had few sights of goal

Showed character and quality to respond to penalty miss at Anfield by netting here and always threatening.

City have now come through away games at Arsenal, Liverpool and Tottenham without conceding a goal. Top of the league despite missing De Bruyne for much of the season. Still the team to beat.

Nearly punished when he was caught in possession in his own penalty area and City lost impetus without Aguero. 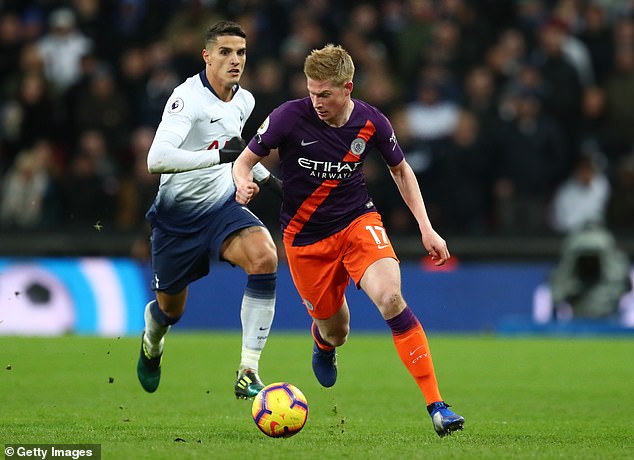 Nothing for either manager to complain about and correct to book Moura in the first-half for a dive. Allowed the game to flow well.