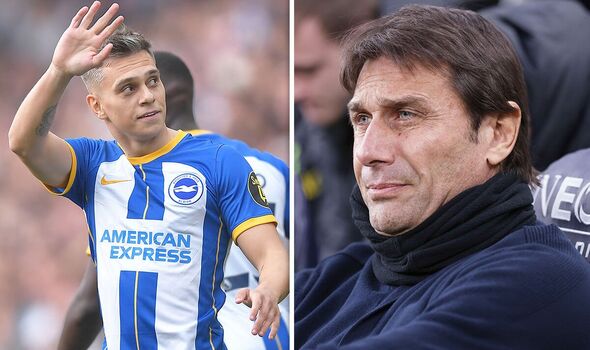 Tottenham are speaking to Leandro Trossard regarding a possible January transfer, according to reports. But Arsenal remain a potential option for the Brighton winger before the end of the month.

Trossard was left out of the Seagulls squad for the 3-0 win over Liverpool last weekend. Manager Roberto De Zerbi was not happy with his attitude on the training ground.

De Zerbi has since offered the Belgian an olive branch but his situation has alerted Premier League rivals. Tottenham were claimed to have had a verbal offer of around £12million turned down for Trossard in the last few days.

Transfer expert Fabrizio Romano says talks are ongoing between Spurs, the player and his representatives. Arsenal are a possibility after missing out on Mykhaylo Mudryk to Chelsea.

Win a pair of tickets to the Premier League or Women’s Super League match of your choosing! CLICK HERE

However, Romano says Spurs are currently favourites for Trossard’s signature. He told WettFreunde: “Tottenham are currently reviewing the situation with Leandro Trossard.

“He’s a very good player and he’s available in the market now. So, Tottenham are in talks with Trossard but at the moment the talks are not very advanced.

“Arsenal could also be interested after the situation with Mudryk and I think the next few days will be crucial for Arsenal and they have to decide what they want now. So, Arsenal is a possibility for Trossard, but I think Tottenham are more likely to sign him.”

Trossard has seven goals and two assists to his name in 16 Premier League appearances so far this season. But after being told he was dropped for the match against Liverpool, he left the country on the Eurostar last Friday, as exclusively revealed by Express Sport.

After the win, De Zerbi confirmed he gave Trossard permission to travel and does not want to see him leave in this window. De Zerbi said: “Yes, but I wanted to answer clearly about Leo. I am sorry for this situation, I think I didn’t make a mistake with him.

“The people who work inside of Brighton know very well the situation. I am fine with myself. I am open to waiting for him because he’s a good guy, he’s a very good player for us, a very important player.

“I don’t want him to change team, but he has to understand that he has to work with my attitude and in my way because I am the coach and I decide the rules inside of the dressing room.”